Image
Little kitten has a badly infected leg. The cause is soon discovered: a broken elbow. He receives help from Saving Grace Rescue and Best Friends.
By Christina Green

Shadowboxing from his back, volleying feathers, and racing around the house in three-wheel drive, Luke pretty much acts like any other kitten. And with enormous blue eyes and soft, wispy white fur, he’s just as adorable as any other kitten, too.

It’s that three-wheel-drive part that makes him different and put him at risk in an animal shelter in Stockton, California. It was bad enough that he had lost his home, but with that flat front tire, which included an elbow that was swollen and pink with infection, poor Luke was essentially operating on only one good front leg.

But thanks to Saving Grace Rescue and some financial assistance from Best Friends, Luke is getting the care he needs. His life took a turn for the better when the right people discovered him and committed to help.

Kitten with leg that may need to be amputated 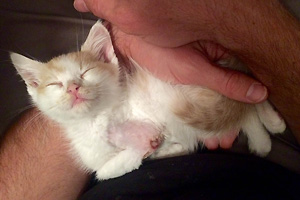 With a dedicated group of foster families, Saving Grace Rescue, based in San Francisco, focuses on some of the most vulnerable animals in shelters — cats with medical needs and kittens less than eight weeks old. And because Luke fit both criteria, the poor little guy really needed help.

“The shelter actually opened his wound and tried draining it out,” says Amber Holly, CEO of Saving Grace, “but it was just temporary relief. They couldn’t do much more for him because he weighed less than a pound.”

So Amber took him into Saving Grace’s foster program, thinking the leg would eventually need to be amputated. In the meantime, they gave Luke all the food he could eat, along with medications to control the infection. The expensive nature of his care would have a big impact on the budget of a small nonprofit rescue group like Saving Grace. But luck was on Luke’s side.

Saving Grace is part of Best Friends’ No More Homeless Pets Network, a group of approximately 1,400 shelters and animal welfare groups around the country committed to ending the killing of pets in our nation’s shelters. Best Friends provides many forms of assistance, ranging from finding homes for specific animals and giving out grants, to organizing and promoting adoption campaigns.

Some organizations put the money into their adoption programs so they can offer reduced fees, while others use the money to defray the cost of spay/neuter services. When Saving Grace’s name was drawn, the organization already knew how the money would be used — to rekindle the light in one special life.

When Luke had finally matured enough for a full evaluation, the cause of the infection was determined. It was a nasty broken elbow, and while he’ll still need careful veterinary care and some help for his leg to heal, odds are that he’ll get to keep his leg.

And best of all, Luke already has a potential adopter. Soon he will be able to bring his light and love to one lucky family.

Be a part of the good news by giving to the animals. You'll be helping our No More Homeless Pets Network partners, too.

Learn more about all the ways Best Friends helps pets across the country through the No More Homeless Pets Network.