How an Illinois rescue group helps dogs in Texas

Image
Read story of tiny Chihuahua who is transported from Palm Valley Animal Center in Texas to Wright-Way Rescue in Illinois, where she is adopted.
By Nicole Hamilton

When Bambi arrived at Palm Valley Animal Care Center (PVAC) in Edinburg, Texas, she tipped the scales at a whopping three pounds. Bambi was tiny, even by Chihuahua standards. You could see her rib cage through her fur, and when she walked she was shaky on her feet.

It was clear that to feel better prior to finding a home, Bambi needed medical attention. But the little dog was at one of the busiest shelters in Texas, let alone the country. At PVAC, even healthy dogs can be at risk of losing their lives if the shelter runs out of space.

While the odds seemed insurmountable for this tiny girl, they really were not because PVAC works with many shelters and rescue groups that can take in pets. Plus, a Best Friends transport was scheduled to go to Wright-Way Rescue in Chicago and Bambi, along with many other lucky dogs, got a spot on board.

“Wright-Way has been such a valuable partner for Palm Valley Animal Center,” says Mike Bricker, Best Friends manager of lifesaving operations who works at PVAC to help the shelter increase its save rate. “They've saved 170 at-risk dogs from this shelter between last year and now.” 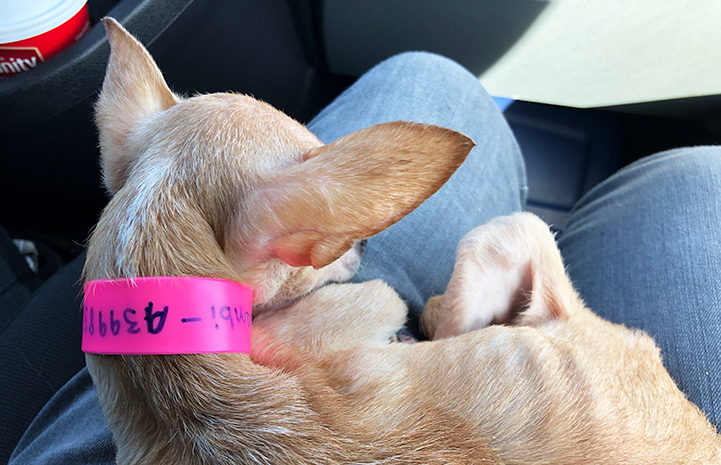 Christy Anderson, founder of Wright-Way Rescue, first heard about PVAC years ago when a friend who had just moved to south Texas told her how badly the shelter needed help. Wright-Way immediately stepped up to do what it could, even if it was just transporting a few dogs at a time by air.

Then last year, Wright-Way and other organizations were able to help more dogs at PVAC after Best Friends brought on two full-time shelter employees and launched a new transport program. The transports have increased the number of pets going from PVAC to Wright-Way and other rescue groups across the country. That’s how Bambi found herself Chicago-bound.

Here’s how the transports work: Christy and other Wright-Way staff and volunteers meet the Texas dogs at Wright-Way’s facility in Murphysboro, a town near the southern Illinois border. That’s where the dogs undergo another medical exam before making the final leg of the journey to Chicago, where they are spayed or neutered and placed in foster homes.

A foster network in Texas has made it possible for more dogs to go from PVAC to foster-based rescue groups. Dogs are quarantined in foster homes in Edinburg, where they not only get to spend time in a home instead of the shelter, but they’re safe from the diseases that can easily spread in a shelter environment. PVAC’s foster program has made Christy feel more confident about welcoming large groups of dogs from PVAC.

“Parvo and distemper are more common in Texas, and are very challenging for rescues in Chicago to treat,” says Christy. “Without a proper way to quarantine the dogs, we could only take dogs on a very small basis. Now we can take more.” 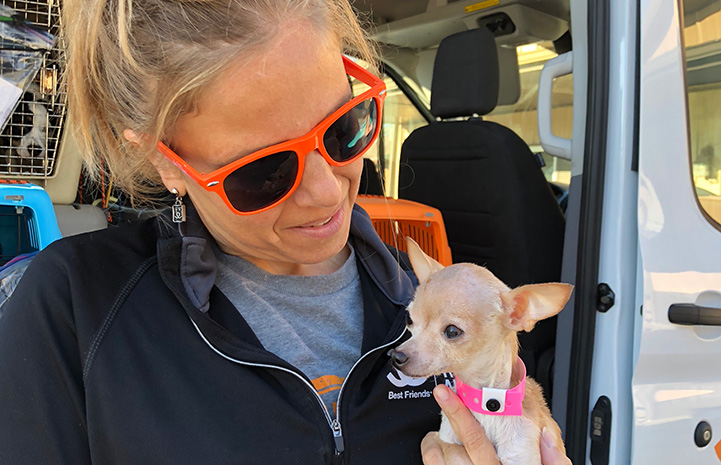 40 dogs from Texas to Chicago

Bambi was part of a group of 40 puppies traveling from PVAC to Wright-Way. The evening before her big trip, Bambi’s foster mom brought her to PVAC, where she was examined by the shelter’s veterinarian and issued a health certificate so she could travel across state lines.

The little dog had gained a bit of weight in her foster home, but she still needed to gain more and was still a little wobbly when she walked. Luckily for Bambi, she would continue to receive medical attention at Wright-Way so she could start feeling better.

Bambi sat quietly in her carrier as the transport van made its way through Texas. Then, on the final leg of the journey, she got to sit up front in a volunteer’s lap, where she took in the sights. Sometimes she’d look up and wag her tail, as if she knew the best was yet to come.

When the dogs finally reached Wright-Way’s facility in Murphysboro, Bambi and the other pups were greeted by several staff and volunteers, who swiftly unloaded the carriers and got the puppies ready for their medical exams.

Bambi, had photo ops with everyone there. The little dog hadn’t been in Illinois for more than 30 minutes and already she had found huge amounts of love.

Feeling better and filling a home with happiness

Shortly after arriving in Murphysboro, the dogs from PVAC arrived at Wright-Way’s adoption center in Chicago. It wasn’t long before all 40 of the puppies, including Bambi, were adopted.

Vets have discovered that Bambi’s shaky stance is due to bone degeneration in her tail and hind legs. She’s on medication now, and that’s helping her. She’s also getting large doses of love.

“When she first arrived in our home she was shy, scared and confused,” says Claudia Villagomez, Bambi’s adopter. “However, she quickly acclimated to our home, our family and her new life.”

Bambi still loves cuddling on people’s laps and looking out the window, and has learned how to howl when the doorbell rings. She’s also made friends with the family’s other dog, Abby, who lets Bambi steal her food. 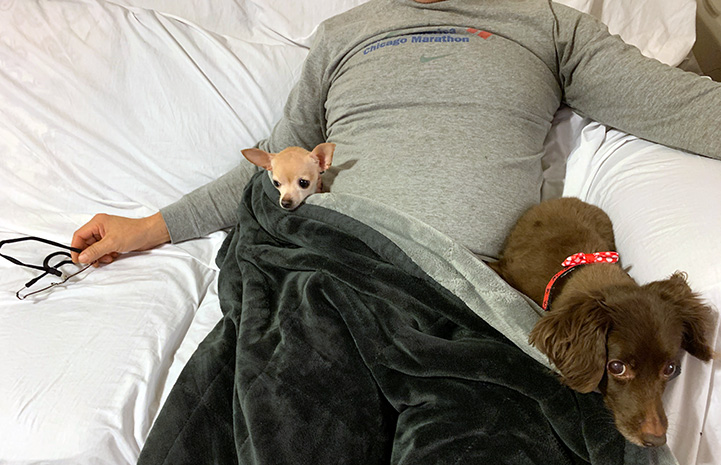 Bambi still has challenges sometimes when she walks, and the family is looking forward to helping her gain strength when the summer comes and they take walks around the park.

“This three-pound cutie has brought immense joy to our family,” says Claudia. “We’ll repay Bambi by giving her a life filled with love and happiness.” 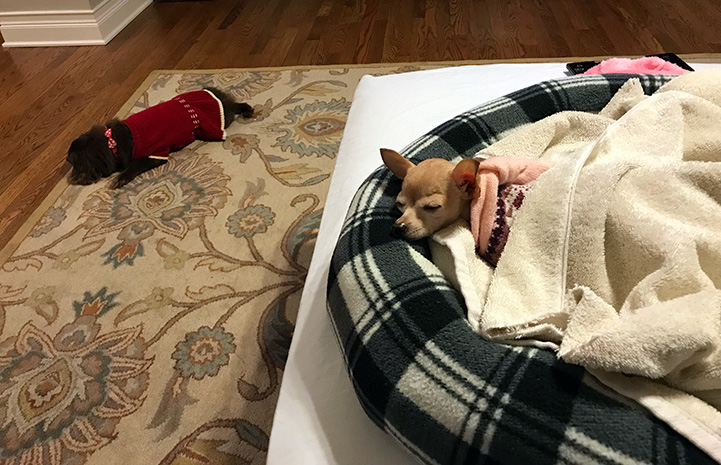