How a once-abused dog found love

Image
Once-abused dog had behavior issues. He lacked impulse control, was jumpy and mouthy, and reactive to other dogs. His life has changed for the better.
By Christelle L. Del Prete

At Phinny’s adoption party at the Best Friends Visitor Center, the happy brown-and-white dog eagerly tore open a gift bag to reveal a stuffed lamb toy and a couple of squeaky toys. He also got a specially baked doggie birthday cake, which he quickly ate, leaving just a few bite-sized crumbs for later.

Phinny may not have understood why all his friends from Dogtown were so excited that evening — the eve of his adoption — but it’s been a long road for him. Originally rescued from an abusive situation, Phinny came to the Sanctuary from a Best Friends Network partner in California. He hadn’t had much luck finding a home with his previous rescue organization, and though he had a large fan club of Dogtown volunteers, it took him almost three years (about half his life) and a lot of hard work to land a new home. 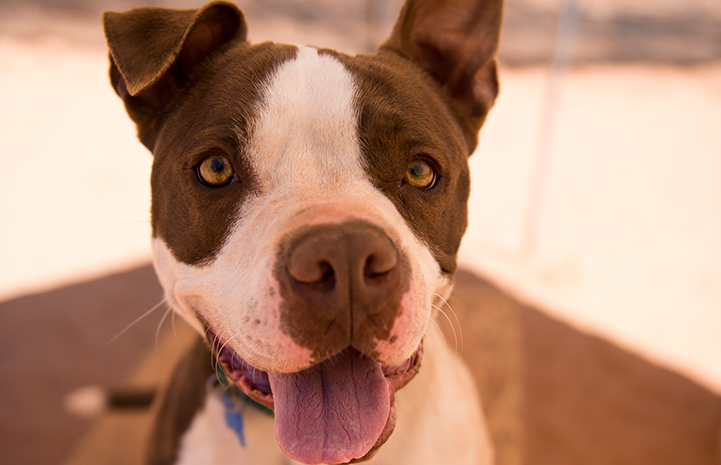 No one knows if Phinny’s behavioral challenges were caused by the head trauma he suffered in his previous home, but he was often anxious and struggled mightily with impulse control. Phinny could also be jumpy and mouthy with people and very reactive to other dogs while he was on leash. He couldn’t be housed with other dogs at the Sanctuary and was featured in a “solo artist” Sanctuary adoption promotion, meaning that he needed to find a home where he could live as a single dog.

Despite these challenges, Phinny has such a happy-go-lucky personality that his caregivers knew it was only a matter of time before the right person would fall for him. ​“The thing that’s lovely about Phinny is that he loves everyone,” says Dogtown caregiver Stacy Schatz.

It would take time for the right person to fall in love with Phinny and adopt him. In the meantime, Dogtown caregivers and behavior consultants worked hard to help him overcome his challenges and put his best foot forward. 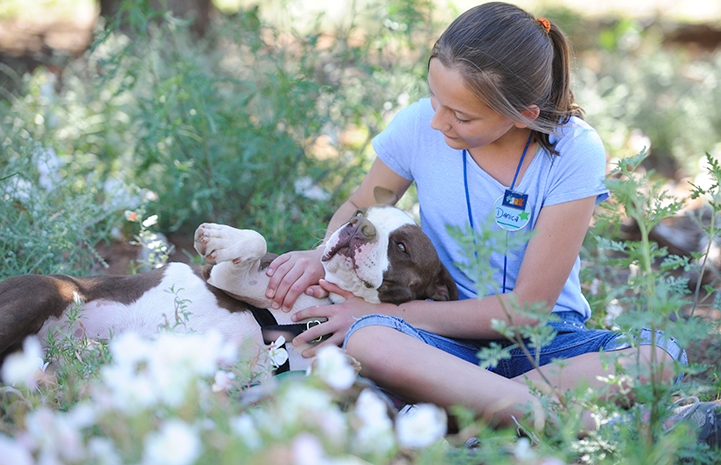 After a year and a half of dedicated training and practice at the Sanctuary, Phinny had greatly improved his leash skills. With the help of his caregivers, he was able to walk and even run on leash with another dog nearby — without becoming upset. He can also greet people appropriately now, with all four feet on the floor instead of jumping up excitedly. Instead, he often offers people his paw.

Though Phinny didn’t know it, he’d won the heart of his future adopter in his early days at Best Friends. “My family and I happened to take Phinny on a sleepover almost three years ago and I fell in love with him,” explains Hailee Tocco. “I have always been a fan of the dogs who need a little more attention, and his love for belly rubs sealed the deal.”

After that first sleepover, Hailee returned to the Sanctuary from Phoenix once a year to volunteer at Dogtown and take Phinny on an adoptable animal sleepover. “Over the last three years, we had Phinny on seven sleepovers (including an overnight for Christmas and New Year’s Eve), and I introduced him to my boyfriend,” says Hailee. “This past January I saw him at the Sanctuary and realized he would really benefit from being in a home environment.”

Only one thing stood in the way of Hailee bringing Phinny home. She and her boyfriend already had a dog, and, like Phinny, she wanted to be a single dog. As far as Hailee was concerned, there was only one thing to do: renovate her home to accommodate two single dogs who might never be able to live together, but who she couldn’t live without. 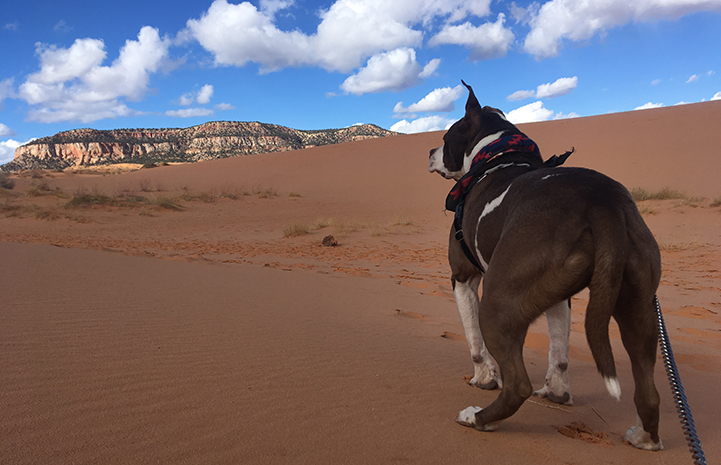 Hailee and her boyfriend got to work. “Initially we put up a brick wall with a gate separating the backyard from the side yard and a door separating the main part of the house from our den room that belongs to Phinny,” she says. “But after adopting him we realized that the gate was not enough of a barrier to allow him and my other dog to relax. And Phinny could easily clear the six-foot wall. After a little creative thinking, my boyfriend and I started construction on two dog rooms. The indoor room has a roof (as Phinny showed us he could clear that barrier, too) and his new favorite possession, a couch. The outdoor room was originally 10 feet long, but we are renovating it to make it 17 feet long, so he will have more room for his zoomies.” 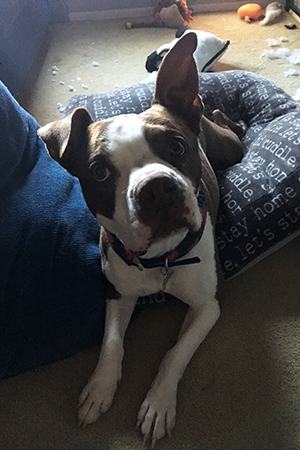 ​Phinny also has his own dog door connecting his indoor and outdoor spaces, and he loves to sit outside and take in his surroundings. During the day, he gets Kong toys filled with yummy treats to stay busy, and in the evenings, he lets all his energy out by running around in the backyard with Hailee and her boyfriend. It’s the perfect situation for him.

“I’m so happy for Phinny,” Stacy said at his adoption party. “Hailee is one of his biggest fans. If there was a perfect adopter out there for him, this is it. They (Hailee and her boyfriend) know him well and have made the investment in him by changing their home.”

Hailee’s just happy she could finally give the dog she’s loved for years the home he’s always deserved. “We are so grateful we could adjust the house to allow him to stay,” she says. “Phinny has a special place in our hearts and we hope that all the other animals at Best Friends will have their chance at a forever home, too.”