What happens when you pit enthusiastic college football fans against their closest rival to see who can help the most pets in need? On November 25th, the Humane Ohio Spay/Neuter Clinic found out. The quick-thinking organization turned football rivalry into a whopping 1,544 pounds of food for the Humane Ohio Pet Food Bank. It might just be the best thing to come out of competition between the University of Michigan (U of M) and Ohio State (OSU). As it turns out, fans’ generosity came just when it was needed the most. 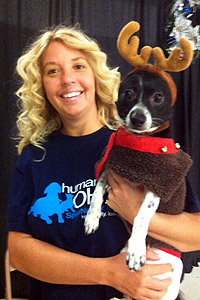 Humane Ohio Spay/Neuter Clinic, a Best Friends No More Homeless Pets Network partner, helps save countless lives each year with its pet food bank and low-cost or free spay/neuter services to the community. Jill Borkowski, marketing director for Humane Ohio, says, “This year alone, we distributed over 80,000 pounds of food. While we are primarily a spay/neuter clinic, the food bank not only keeps pets from going hungry, it helps keep pets out of the shelter system, and it helps people in need, too.”

But this past year became particularly tough when the food bank lost one of its biggest suppliers. In October, a local retail store changed its policy and stopped donating damaged pet food bags to the organization. Facing a big dip in donations, Humane Ohio staff knew they had to start making up the difference in the lost donations in order to have enough pet food to supply the many folks who rely on it to help keep their charges fed. Thinking fast, Jill was the mastermind behind the U of M vs. OSU challenge. She designed a border battle with simple rules: Whichever team’s fans donated the most pet food to the food bank in one day would win.

In the spirit of collaboration that Humane Ohio is known for, Jill reached out to the community to help out with the event, and got an overwhelmingly supportive response. She had the ABC affiliate on hand to broadcast the event live starting at 6 a.m., as well as adoptable dogs from local rescue groups. Over 25 media outlets were on board to promote the event, including local ESPN radio stations. Jill says, “We knew we had to get creative to help support the strides being made in Lucas County and beyond, and having built good relationships with local media helped us reach an audience we usually don’t hit in animal welfare.”

Michelle Logan, No More Homeless Pets Network specialist, sent out a member message promoting the event to Best Friends’ animal-loving audience. She was happy to support and promote the event, due to Humane Ohio’s hard work year-round. She says, “They’re really involved in keeping animals out of the shelter system, and we wanted to help promote this cool concept of a fundraiser because they help so many people and pets. This event really exemplifies thinking outside of the box.”

Hundreds of pounds of dog and cat food 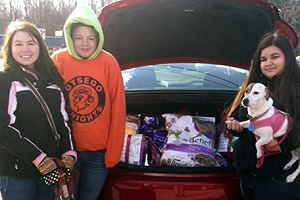 The big challenge ended with U of M fans raising 1,001 pounds of pet food, while OSU fans raised 543 pounds. The event also featured pet photos with Santa, which took in over $1,100 in cash. The food drive was so successful that they staged a second drive and Santa photo fundraiser in December. For that event, Lambertville Hardware in Michigan offered pallets of pet food at reduced rates specifically to be donated.

It all goes to show that football fans are happy to step up and help their community’s pets; and friendly rivalry doesn’t hurt. Now everyone’s waiting on a rematch, but of course, the biggest winners are the pets and their people. Both team’s fans earned those bragging rights.

Learn about other rescue groups and shelters