Image
Read about four cats with urinary incontinence who require little extra care, are clean, and need to have their bladders expressed a few times daily.
By Christelle L. Del Prete

If you’ve ever been asked what made you fall in love with your cat, perhaps you answered, “There was something about her eyes,” or “He has such an amazing personality I couldn’t resist.” Maybe she showed up on your porch one day, or he reminded you of a cat you had during your childhood. Perhaps you went out of your way to adopt a shy, overlooked kitty who shows her love and appreciation in a thousand different ways every day.

Whatever the reasons that people are drawn to their cats, those instant connections can deepen into a meaningful bond. It’s no different for cats with special needs — those who require a little more care than the average cat. Some people have found that giving just a tiny bit of extra care helps bring them and their cats even closer.

Jenn Corsun, Olivia Eaton and Heather Henley all fell in love with and adopted cats from Best Friends Animal Sanctuary. And their cats happen to have one thing in common: feline incontinence. Those words might call to mind a house that’s impossible to keep clean or a cat who (no matter how affectionate and loving) would never be able to curl up on a lap, couch or bed without making a mess.

On the other hand, dealing with cat incontinence is not necessarily messy, and the rewards of adopting a cat with that condition can far outweigh the challenges. Jenn, Olivia and Heather tell us why they welcomed Winter, Felicity, Koda and RJ into their homes with open arms, and what life with them is really like.

Winter the cat: Independence over incontinence

Winter lived at Cat World for a few years before she went home with Jenn, but the pretty longhaired tabby cat always had the Cat World manager’s heart.

“I loved Winter right from the start,” she says. “She is very much her own cat and I’m drawn to cats like her who are independent. She’s feisty and such a cutie.”

Winter is a tough cookie and her toughness might come from a life that hasn’t always been easy. The nine-year-old senior looks like a Manx (a cat breed that carries the gene for a shortened or “bobbed” tail), so one might conclude that she has Manx syndrome — a birth defect affecting Manx cats that can cause incontinence. But Winter had either been hit by a car or had a tail-pull injury. Her tail had to be amputated and she must have her bladder manually emptied twice a day.

Though it may sound scary (and it does take a little practice), anyone can learn how to express a cat’s bladder. It’s really no more complicated than supporting the cat’s body, putting a hand over her bladder area and giving a gentle squeeze. Best of all, once you form a bond with your pet and establish a daily routine, it can be as easy as one-two-three.

Sometimes, Winter also needs to have her colon evacuated (a procedure that is slightly more complicated than expressing her bladder). But when it comes to her incontinence, Jenn says, she is easy. “She keeps herself clean and doesn’t require much extra care.”

Because Jenn cares for cats with a variety of unique needs at work, she thought carefully about her decision to bring Winter home. “I do this at work, so I had to ask myself if I wanted to care for a cat with incontinence at home, too. But I just had to overcome the thought that it was going to be a lot of work. Winter’s care is not difficult. She doesn’t leak urine, and I don’t have to scoop a litter box for her.”

At home, Winter is still a feisty, independent cat, but she clearly appreciates all of Jenn’s TLC. “She likes to sleep in my bed and be where I am. She keeps an eye on me,” says Jenn.

More about how to care for an incontinent cat 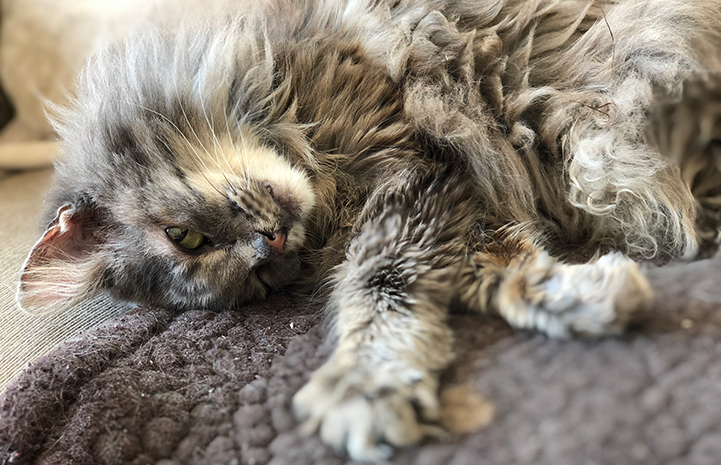 Felicity the cat: Incontinence no match for connection

Six-year-old Felicity did more than keep an eye on Olivia Eaton while she was working with her at Cat World. She chose Olivia as her person. 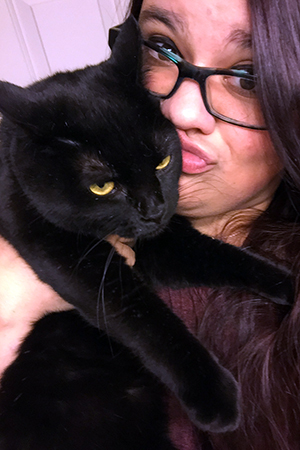 “She was kind of shy and she would spend a lot of time hanging out on a shelf in the laundry room at first,” Olivia remembers. “Felicity and I came to Cat World at the same time, so I felt a connection with her.”

Once Olivia befriended the shy black cat, Felicity decided they should always be together. She’d even ride around on her caregiver’s shoulders. When Olivia made their bond official by adopting Felicity, she had only just begun learning how to express a cat’s bladder. Felicity also required several daily medications that Olivia would have to give her.

“At first I wondered if I could do it all,” Olivia says. “But I spend less time expressing and evacuating Felicity than I ever spent scooping a litter box. It truly is not that much different from having any other cat. And she’s extraordinarily clean.”

Olivia acknowledges that there are some special considerations for someone planning to adopt a cat with incontinence. “You have to express their bladder at least twice a day, which means making special arrangements when you go away. But teaching people how to do it is not difficult. I taught my roommate. People might think (expressing a cat’s bladder) is beyond their ability, but don’t be so quick to tell yourself you can’t handle it. I don’t even think about it anymore,” says Olivia. “It’s an extra minute out of my morning — not a big part of my life.” 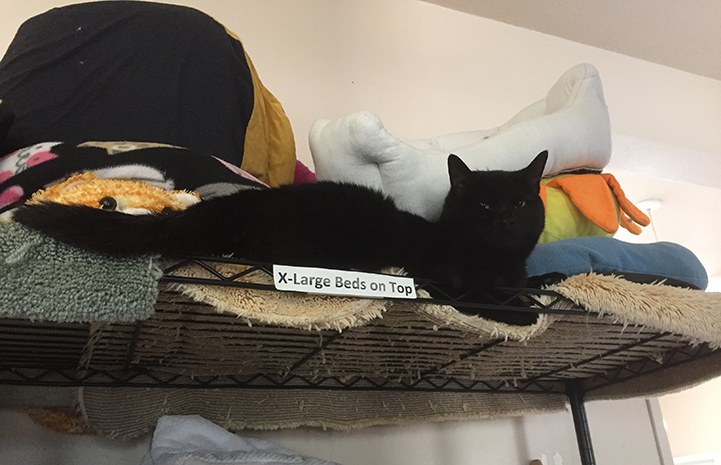 For Heather Henley and her cats, Koda and RJ, it’s all about falling into a good rhythm. “Once you start working with your cat and you develop the relationship and the routine, (expressing his or her bladder) gets easier to do,” she says.

Heather has lived with RJ and Koda for years. Koda, now 11, came to Best Friends and went home with Heather in 2012. Nine-year-old RJ followed a few years later. Both cats are brown tabbies, and while neither of them is in any pain, they both became incontinent from injuries (Koda from BB gun pellets and RJ from a car accident).

Just as Olivia’s cat chose her, Koda chose Heather. “Koda lived in the lobby of the building where I worked at Cat World. She would follow me all around and meow whenever I went into another room,” Heather says. Expressing Koda’s bladder became just another part of their routine, and they often turned it into a game.

More about how to express a cat’s bladder

At home, Koda and Heather play hide and seek when it’s time for Koda’s bladder to be expressed. Koda will hide in a few different spots and wait for Heather to find her. When Koda is ready, she’ll hide under the coffee table. Once Heather finds her there, she’ll follow Heather to the litter box.

When Heather began taking care of RJ at Cat World, he used to run up into the rafters to escape when it was time to have his bladder expressed. Heather was one of the only caregivers who could convince him to come down, and she did it the same way by making it a game.

“RJ’s nickname is Mr. Tnokis,” Heather says. “Instead of climbing up after him and carrying him down from the rafters twice a day, I’d walk around the room pretending to look for him and say, ‘Paging Mr. Tnokis. Mr. Tnokis to the restroom, please.’ Once he realized it was a game, he’d come down from the rafters and meet me at the litter box. We had that bond right from the beginning.”

Though there are no rafters in Heather’s home, RJ still meets her at the litter box at the appointed time each day. And she still calls him Mr. Tnokis. 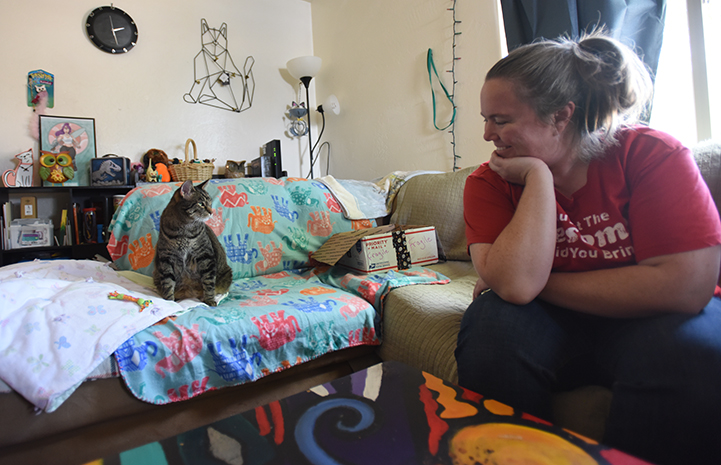 Challenges and rewards of adopting an incontinent cat

Because every cat is an individual, each one will have a different level of tolerance for the special handling incontinence requires. It can take some time to get to know your cat and to find a schedule and routine that works for everyone in the household. “Of course, you will have days when you feel frustrated, but that’s with anything in life,” Heather says. ​And, as with anything in life, caring for a cat with incontinence can be much easier than it sounds.

So, if you find yourself falling in love with a cat, and that cat happens to have feline incontinence, there’s no reason to hit the brakes. The road might be a lot smoother than you’d think, and the ride is well worth it. 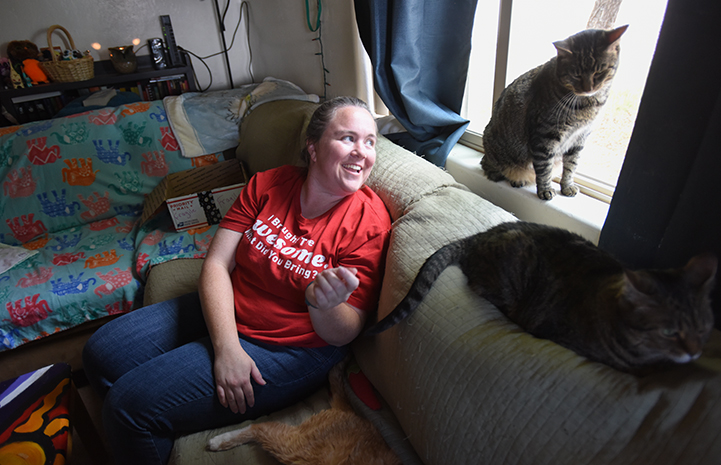