Image
Little kitten had a lot of challenges early in his life, but now this incredible survivor cat is living life to the fullest and believes he's a dog!
By Jess Roper

Candycane is a sweet name for a handsome young cat who loves to walk on a leash in Central Park and is always ready for a new adventure with friends, but his happy ending wasn’t guaranteed. In December of 2018, he was just one week old when he, his mother and brother entered Brooklyn Animal Care Center — all three at risk of not making it out alive.

Without the loving care and dedication of a lifesaving team that included his champions at Animal Care Centers of NYC, Best Friends Animal Society and the Animal Medical Center in New York City, Candycane wouldn’t be alive and thriving today.

A rough start in life 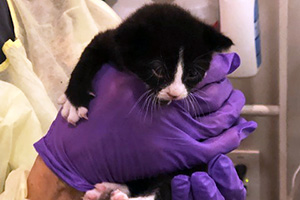 Candycane and his brother, Eggnog, were just a week old when they were found outdoors and brought into Brooklyn Animal Care Center with their mom, Hot Chocolate. At that young age, a kitten can’t yet see or hear and only weighs around 200 grams —about the weight of your smartphone.

Every year thousands of kittens enter New York City shelters, and the tiny balls of fluff are the most vulnerable of shelter animals. Unable to eat on their own or regulate their body temperatures, baby kittens need a mom or dedicated caregiver to feed them and keep them warm so they can survive.

Kitten season is now: How you can help

Foster to the rescue

The shelter is no place for a mom to raise newborn kittens, but they didn’t stay there long because Best Friends had a foster volunteer ready and they soon were all snug in a home. But then they all came down with an upper respiratory infection. 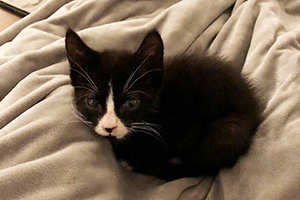 Because of her illness, mama Hot Chocolate couldn’t produce enough milk for her kittens, which caused the kittens to also develop severe symptoms. After Best Friends veterinarian Dr. Allison Bliss treated the little family, the team decided to move Candycane and Eggnog so they could get round-the-clock care at the Best Friends Lifesaving Center’s kitten nursery. Meanwhile, mama Hot Chocolate returned to her foster home to complete her recovery.

Despite all attempts to save him, Eggnog wasn’t able to survive, but his brother pulled through. “Candycane is the perfect example of tiny but mighty,” says Missy Parker, a lifesaving support services lead in New York. “He had the odds stacked against him, but he kept on fighting. A few weeks after receiving amazing care in our kitten nursery, he was able to go back to his original foster home.”

New challenges for a tiny kitten

Candycane’s struggle to survive infancy, which included losing a sibling, is all too common for neonatal kittens entering shelters. And though he had returned to his foster home, he still had a long way to go before finding his current forever home. 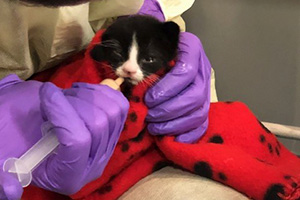 Candycane won the battle against his respiratory infection and began to grow, but then he was suddenly unable to keep his meals down. And because he regurgitated everything he ate, he stopped growing. Missy, who had a lot of experience fostering kittens with medical cases requiring special attention, decided to take over his foster care and help him clear the next hurdle.

Because Candycane’s diagnosis was difficult, the Best Friends vet team worked with Dr. Rachael Sirois, a resident in internal medicine at the Animal Medical Center. They soon learned that he had an inflamed esophagus and placed him on a special diet.

“I look back at photos of Candycane on his first day of foster with me and he didn't look so hot,” says Missy. “But by the end, his coat was shiny and he was the perfect weight. I'm biased, but he is the most handsome guy in the world!” 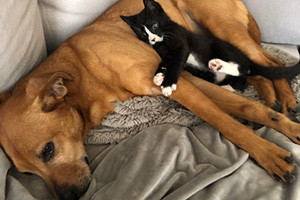 The most extraordinary thing about Candycane isn’t that he had such a rough start in life or overcame obstacles. What’s truly remarkable about this gorgeous tuxedo prince is his unwavering positivity and spirit of adventure. While many people might let health issues bring them down, Candycane has always faced life with bravery and spunk.

He delighted Missy and her friends with his silly and lovable antics, which included chasing the vacuum cleaner and hanging out on Missy’s back while she blew her hair dry. He never shied away from a new experience, and that included grooming and wrestling with Missy’s dog.

In fact, there were times when he appeared to think he was a dog.

Missy decided to go with the flow and harness Candycane’s adventuresome spirit — literally. She taught him to wear a harness and started expanding his horizons.

“I took him for adventures up and down the hallway on the floor of my apartment,” she says. “Then, I started taking him on adventures to different floors in my building and down to the laundry room while I did my laundry. You have to get creative in small NYC apartments.”

When he was old enough, those adventures expanded to the great outdoors. Candycane spent delightful afternoons in Central Park rolling in the grass, chasing bugs, climbing trees and greeting all the animals around him. While he might have been the only cat out for a walk in the park each time he went, he fit right in with the other dogs there, strolling along and stopping to greet curious dogs who wanted to say hello. His heart was full of love for meeting new friends and exploring. 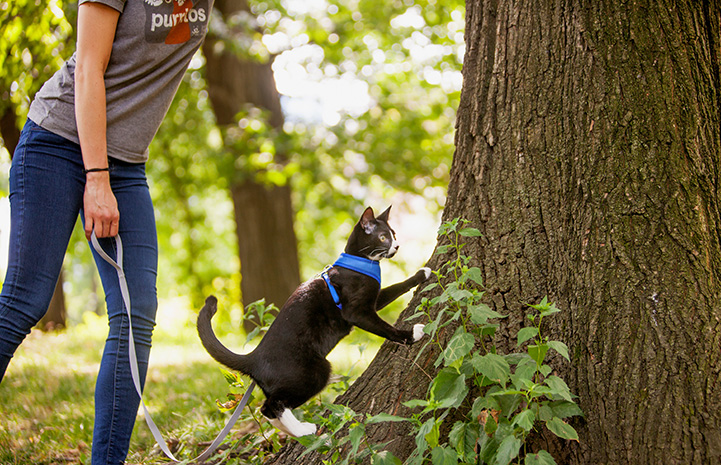 Missy loved fostering Candycane, but all good things must come to an end. She knew he needed a special someone now that he had overcome health hurdles and learned so many new things. And it would allow her to open her home to the next animal in need. So, Candycane moved back to the Best Friends Lifesaving Center so he could meet potential adopters.

It wasn’t long before two friends who were roommates came to the center looking to add a cat to their household. Anna had grown up with a beloved cat and continued to share a home with her roommate’s two cats, Sal and Kiwi.

“I knew that I wanted a furry friend of my own, but with two other cats in our apartment, I wanted to make sure I found the right match,” says Anna, who immediately was won over by Candycane’s adventurous spirit and friendly disposition. “We knew we wanted a young male cat, so he fit the bill in every way. He's now named Tex, and he’s the perfect companion.”

After Best Friends adoption team members explained Candycane’s harrowing medical past, the two friends knew he was the one. Anna called the Best Friends adoption process “amazing,” and was happy to learn that she could bring him home the same day. Candycane went home with them that evening, eager for the new adventure.

Candycane’s antics with Kiwi and Sal keep the roommates laughing. And his nightly bedtime zoomies with Sal are a featured part of the routine. He loves to chase anything that moves, including wand toys, balls, and feet, but laser pointers are the toys that truly have his kitty heart.

Tex continues to explore all life has to offer, but he wouldn’t have had this chance to thrive without his foster moms giving him the chance he needed. “It was so incredibly hard to say goodbye,” says Missy. “He became a part of the family and had an amazing bond with my dog. When Candycane was adopted, I cried so many happy tears. This is what fostering is all about — save them all, not keep them all.”

Foster a kitten to save a life 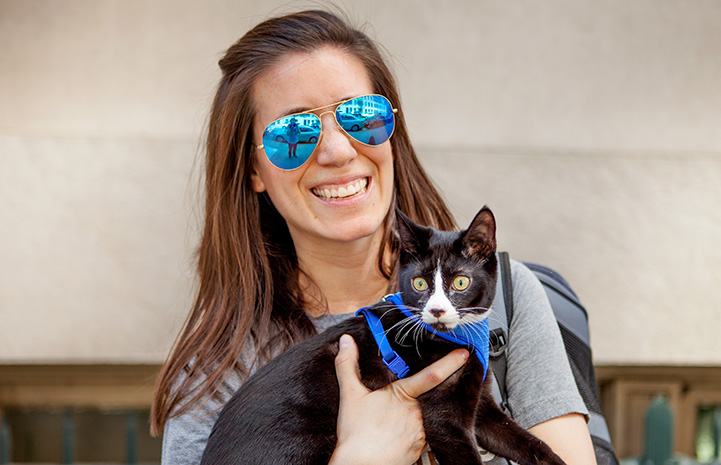