From the gutter to gaining back strength and speed, a roadrunner recovers after being hit by a car.
By Sharon St. Joan

It wasn’t a good day at all for the roadrunner (a really bad day, in fact). Lying in a gutter by the roadside near a golf course in St. George, Utah, he was spotted by two women, each driving separately, and they both stopped to help.

The bird lay very still, unable to move. The two women exchanged phone numbers before one of them picked him up gently, put him into a box that she had with her, and drove him to her house.

By coincidence one of them, Erika Durham, had just signed up to volunteer to help save wild animals by transporting them to Best Friends Animal Sanctuary. This became her first volunteer transport. It was a two-hour drive to the Sanctuary in Kanab, Utah, and Erika arrived with the bird after hours.

Wren, one of Best Friends’ licensed wildlife rehabilitators, had stayed late at the wildlife clinic and was expecting them. Erika, her first wild bird transport completed, headed back home to St. George. 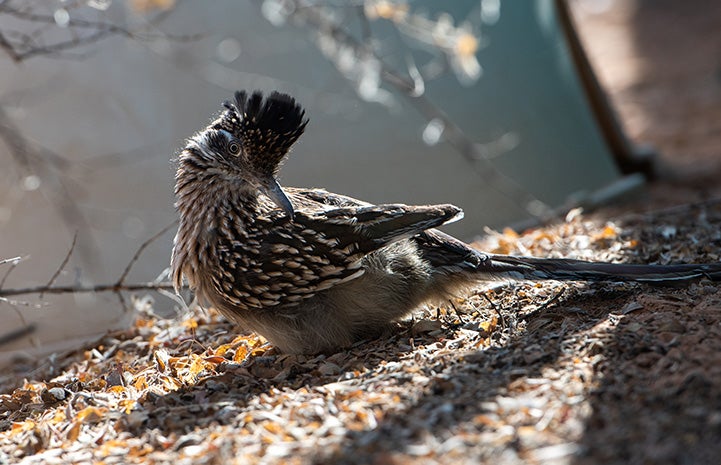 X-rays for an injured bird

Wren recalls that the roadrunner lay still and looked stressed. He had some movement in his right wing, but that was about it. X-rays did not show any broken bones, but clearly the bird had been injured. He could move his head and his right wing a little, but he could not move his legs at all.

The most likely cause appeared to be a spinal injury caused by an encounter with a vehicle. Four Best Friends veterinarians would eventually look over the X-rays and agree that most likely, this was what happened.

That night, Wren placed the roadrunner into an incubator for both oxygen and warmth, and that’s where he spent the next three weeks. They fed him through a tube three times a day, and over time he became calmer and less stressed. His right wing improved, and later his left wing, too. His legs regained some movement, but he still couldn’t stand. The wings were bruised, but not broken.

Wren gave him regular exercises to stretch his feet and legs, and especially to help his left leg and foot to stretch and flatten out.

Feeling much more like himself, he was moved into a larger enclosure (still indoors, but without supplemental heat). Now he was able to feed himself. His legs grew stronger and, one day, he started walking again. Steadily, he was getting better.

Once he began to run, he ran very, very fast. 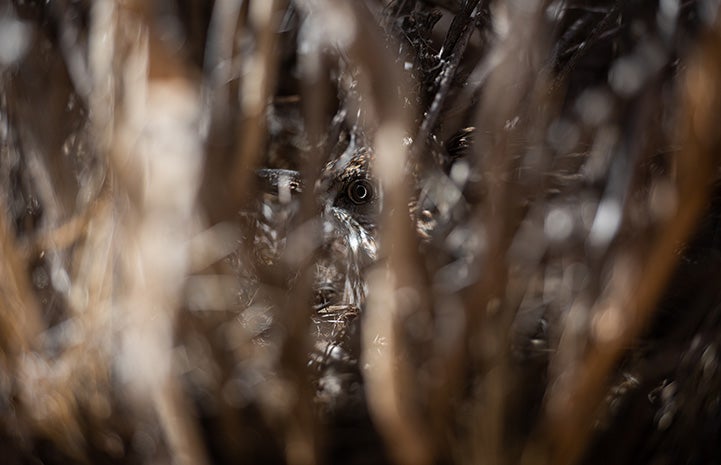 When it was clear that he was ready, he was taken up to the flight aviary and placed in the 50-foot-long section that runs alongside the 100-foot-long aviary, where eagles and other large birds regain their flying strength before being released.

The new space provides plenty of room to run and grow stronger, with natural trees and shrubs to perch in, plenty of places to hide, and a big boulder under which he has hollowed out a resting place. Twice a day, someone goes up to encourage him to practice running so that he keeps gaining strength.

He is energetic and fast. Soon it will be warmer and with the first hint of spring, he’ll be released from the aviary. There are other roadrunners in the area, and it is a good spot for them. He’ll take up his life again in a beautiful, remote natural area that’s much safer than the roads near St. George.

After his release, he’ll look for a mate and begin to call to attract her attention, until one day she appears to make his acquaintance. His life, once interrupted, will resume and he’ll be free and happy in the wild. 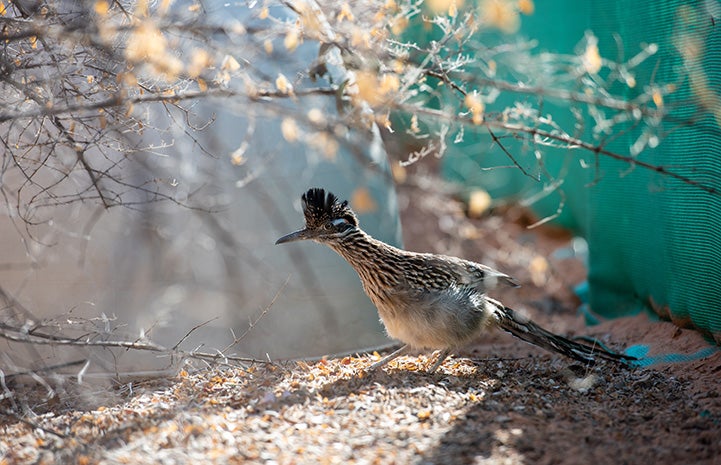