Image
To celebrate International Rabbit Day, learn more about domestic and wild bunnies, and read the story of a large rabbit rescue underway in Canada.
By Best Friends staff

Break out the cilantro cookies and pop open the bubbly. It’s time to celebrate rabbits everywhere! Without question, rabbits always deserve a good scratch behind the ears, but once a year they get their very own excuse for a little extra pampering. International Rabbit Day is celebrated on the fourth Saturday or Sunday every September. 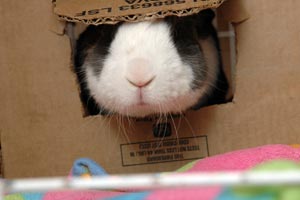 International Rabbit Day is all about celebrating and promoting the welfare of rabbits, both domestic and wild. That can mean anything from volunteering at your local rescue to simply learning more about rabbits. As for the educational side, did you know written records indicate the presence of wild rabbits as far back as 3,000 years ago? Or, did you know rabbits are found in every continent of the world, in nearly every climate? Or, did you know (last one, promise) female domestic rabbits have induced ovulation, which means they are basically fertile all the time? (Please spay and neuter!)

There’s a lot to learn about rabbits. There’s also a lot to celebrate about them.

At Best Friends Animal Sanctuary, the festivities are running all week long. For one thing, large and adorable rabbit photos are hanging up throughout the Sanctuary this week and have been scoring extra high in the "oohs" and "ahhs" factor. Daily tours in the rabbit play areas are up and running, and carrot cake is all over the place - any excuse for a party is a good one, right?

What can you do to help rabbits? 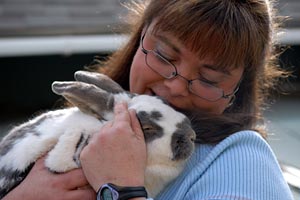 Moving beyond party mode, however, there is plenty you can do to help rabbits — on International Rabbit Day or throughout the year:

Large rabbit rescue at University of Victoria in Canada

This year, as it happens, there’s an even bigger way to help. A massive rabbit rescue is underway at this very moment, with 1,500 rabbits narrowly escaping disaster.

The University of Victoria in Canada has had a ballooning rabbit population for years. Large outdoor communities of rabbits can certainly be a big problem anywhere, but in Canada the problem gets trickier. Domestic rabbits who have been living in the wild for over 30 days automatically and legally are reclassified as wildlife in Canada.

This means that if somebody dumps their pet rabbit on campus, 31 days later the rabbit can’t be adopted no matter how friendly the rabbit remains and no matter how much somebody wants to adopt. By then, the rabbit has become, legally, a "wildlife pest." The university decided to cull the population. 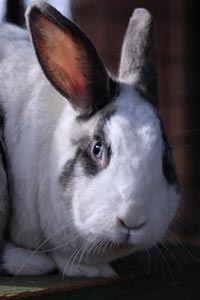 Thank goodness rabbit rescue groups intervened! They convinced the university, as well as the courts, to allow the rabbits a chance to live elsewhere. The school administrators agreed to do so, on certain conditions. One of the major conditions was that the rabbits had to find homes by next March. (Homes out of the country, that is.)

It took some hustle and bustle to find rescues with sufficient space willing to help, but in the end a most unlikely location decided they could be a big part of the solution. And it was all because of one gentle-hearted dove.

Wild Rose Rescue Ranch of Whitehouse, Texas, is home to all manner of deer, squirrels, raccoons, and any other critter needing a little R&R before they head back out into the world. Georganne Lenham, licensed wildlife rehabilitator, manages the rescue along with her husband Bob. They were working with a litter of orphaned rabbit babies some time ago who weren’t doing well. At the same time, they had an injured dove named Noah who took the babies under his wing – literally - and helped keep them warm and safe. The story of Noah and the bunnies went all over the world in e-mail after e-mail, especially among rabbit rescuers.

Georganne heard from the rescuers in Canada who were trying to find homes for the rabbits. They’d remembered the tale of Noah and the bunnies and wondered if Wild Rose had room for any of these political refugees (as they’ve been dubbed). Wild Rose decided that yes, they could help. And in a big way. They’ve agreed to take as many of the rabbits as they can handle. Not for rehab, mind you, but long-term housing.

The staff and volunteers over at Wild Rose have been scrambling round the clock to get ready for the new arrivals. They’ve been building play areas and stocking up on supplies. The first group of Canadian rabbits will arrive in October.

Wild Rose has plenty of acreage and a steady stream of volunteers, but they can still use a lot of help. They need more volunteers to help build fencing, create play areas, and design hidey holes. They could use some more building supplies and donations for other expenses. And as for the rabbits themselves, they need a lift! Bringing hundreds of rabbits from out of country is no small feat and remains one of the key puzzle pieces everybody is scrambling to figure out in a cost-effective way. (Road trip, anyone?)

Best Friends heard about their situation right around the time 2,000 bags of rabbit food were headed to the Sanctuary. Debby Widolf, rabbit manager at Best Friends, felt the rabbits at Wild Rose would need the food more and so it was sent to Texas instead. "Best Friends is just phenomenal," says Georganne.

For all those who want to help Wild Rose and the Canadian rabbits, whether it be to lend a hand onsite or to help in any other way, please contact Georganne at (903) 839-8948 or visit their website.

Read a story about a domestic rabbit who was rescued from the city streets.