A few weeks ago, near Salt Lake City, Utah, a young bobcat was found looking for dinner inside a chicken coop before being netted by the coop’s owner.

Cynthia, a kind wildlife transport volunteer, was already on her way north of the city to pick up some food for a pelican in rehabilitation. But during her drive, she received two phone calls. The first one was about a silver-haired bat found very cold in a doorway (doing OK now and due to be released in the spring). The second was the tale of a bobcat caught in a chicken coop.

The second caller was Debbie Pappas of Second Chance Wildlife, who estimated the bobcat at six to eight months old and probably born this past spring.

With no northern Utah facility equipped to care for a bobcat, the animal would have to be transported to Best Friends Animal Sanctuary in southern Utah. Cynthia, who never seems to think of herself first, stepped up immediately, picked up the bobcat and headed south on a five-hour drive to Best Friends.

About Wild Friends at Best Friends

Later that day, she had just finished placing the bobcat in the capable hands of the Wild Friends staff when she received a third call. With no rest for the weary, she agreed to drive west to Hilldale, Utah, to pick up a Cooper’s hawk and continue all the way back to Second Chance Wildlife that night. The hawk, injured after tangling with electrical lines is (amazingly) recovering and should soon be ready for release.

Settling in a bobcat for observation

It was an exceptionally long day for both bobcat and Cynthia, and by evening, the cat was not only scared of her strange surroundings, but also dehydrated. Caregivers gave her food and water overnight to help stabilize and settle her into a temporary enclosure for observation. What wasn’t clear was if the bobcat could be released right away or would have to wait until spring.

Carmen Smith, manager and head licensed wildlife rehabilitator at Best Friends, arrived the next morning to find the bobcat looking alert, bright-eyed and well enough be moved from the Sanctuary’s flight aviary to a more suitable side enclosure. The bobcat would enter through a badger-proof airlock and would have two igloos to hide or nest in, and many branches to hide or play under. 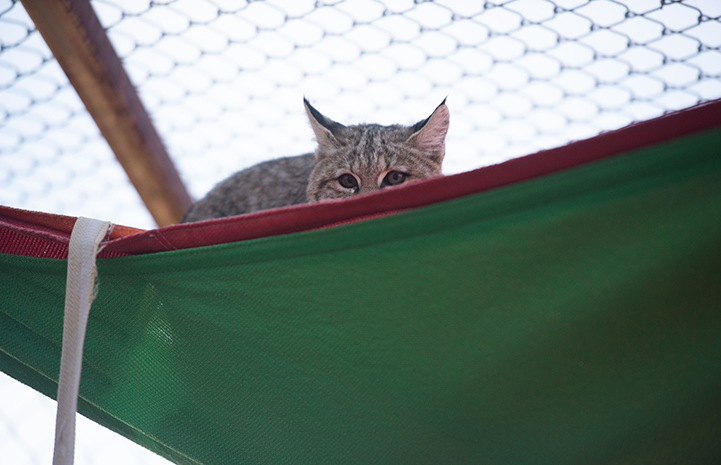 A week later, she managed to climb up onto a double-layered sail that had been put near the top of her enclosure for shade. Around 40 percent grown, the young bobcat was full of energy, anxious to go and adventurous. And no thank-you, she didn’t wish to stay until spring. She wanted to go right now.

Sometimes the best way to tell what’s best for a wild animal in captivity is to just observe the animal’s behavior and go by that. So, one sunny morning, caregivers opened the cat’s enclosure and let her out. It was a soft release (with food and water set out until she got her bearings and found a good area nearby to call home). The bobcat was delighted to be free again.

Thanks to her rehabilitators and dedicated volunteer Cynthia, the young bobcat will live happily in the wild again, free of chicken coops or anything else nearby to get her into trouble.