Image
Soldier Peter Neesley befriends and cares for two stray dogs in Iraq, and after his death, his family brings the dogs home to Michigan.
By Cathy Scott

Two homeless Iraqi dogs – Mama and Boris – are now safely on American soil thanks to the efforts of a soldier’s family, a U.S. senator, and the Best Friends rapid response team. 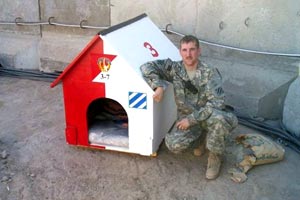 Sgt. Peter Neesley, on his second tour of duty with the U.S. Army, began feeding a mama dog and her two puppies when he patrolled a Baghdad neighborhood. After one of the puppies was hit by a car and killed, Peter built them a red-and-white doghouse – equipped with blankets, a mattress and an Army insignia above the door. He lured the mama dog and her remaining puppy to the doghouse, which he placed just outside the military base wall.

And then he e-mailed his family, sending them photos of the black Lab mix and her white-and-brown spotted puppy, and said he’d decided to fly the dogs home when he returned to the states in six months.

"Our family has always had dogs or cats and other little critters," says his sister, Carey Neesley. "Peter was always bringing strays home."

But on Christmas Day, Peter, just 28, died in his sleep in his barracks (no cause of death has been released) before he could send the dogs home. His soldier friends continued to feed Mama and Boris and watch out for them.

Honoring a soldier’s wish to bring Iraqi dogs to U.S.

From his phone conversations and e-mails, Peter’s family knew how much Mama and Boris meant to him. So, with the help of a network of people on the ground in Iraq and at home in America, Peter’s wish to take the dogs to his Michigan home came true. His dogs left Iraq late on February 6 and landed on U.S. soil the next morning.

Giving his beloved dogs a home has been an emotional boost for the family. "This is the first time I’ve felt truly happy since he died," Carey says. "It’s the first time I can say I’m excited and looking forward to something. We went out last night and bought the dogs name tags and collars and food."

Julie Dean, Peter’s aunt, agrees: "It’s wonderful knowing that the animals Peter loved are safe, that we can touch and love animals that he loved. Bringing the dogs home was one of his last wishes."

The help of a network to save the dogs

Getting Peter’s dogs home was no easy task. The family tried going through official channels and turned to U.S. Senator Carl Levin of Michigan. In the meantime, Kate Schnepel, who works for Best Friends’ Community Programs and Services, learned about the family’s efforts, and that’s when we stepped in to help.

First, we had to find out where the dogs were, then get someone on the ground to look after them, according to Rich Crook, Best Friends’ rapid response manager. After that, we arranged for security, contacted a veterinarian and found an airline. Four weeks later, approval was given and plans were set.

Rich went to Baghdad on a chartered flight and stayed just an hour and a half – long enough to personally pick up the dogs from Threat Management Group (TMG), a security company that rounded them up.

There had been just one glitch: When TMG arrived in Baghdad, they couldn’t find Boris the puppy. The dogs were still living on their own, and Boris was nowhere to be found. "The security firm had to go back the next day to get the puppy," Rich says. But not to worry. "We did this a day in advance," he says, "in case something like this happened."

Once both dogs were in hand, TMG took Mama and Boris to a veterinarian with the Iraqi Society for Animal Welfare. The dogs were vaccinated and examined. After the vet gave them a clean bill of health, he sent them on their way with the proper international paperwork.

Then, with the help of Gryphon Airlines, a charter company that flies in and out of Iraq three times a week, Rich accompanied the dogs out of Iraq, landing with them at Dulles International Airport in Virginia. From there, Rich and the dogs headed by van to Gross Pointe Farms, Michigan, to meet Peter’s family. (Watch for an upcoming story and photos from the dogs’ first days in the Neesley home.)

A soldier's story that touches many hearts

When the dogs left Iraq, the vet who had cared for them sent the family an e-mail. It reads, in part: "This is my job, this is my passion, this is my love. You cannot imagine what I’m feeling now about these dogs."

The family was notified of the approval to fly the dogs out of Iraq as they were about to place Peter’s cremated remains. "We had a beautiful ceremony on Friday," Carey says, "and we were walking from the ceremony to the wall where Peter’s ashes were to go when we got the call from Rich. It was an extraordinary moment."

Peter had been scheduled to return to the states in late July. "He was in the Army for a year, left and came home," his sister Carey says. "When he was home, one of his friends died over there. He had a wife and two children. He didn’t want anyone else with a child and wife to get killed. Peter re-enlisted. He wanted to go in their place.

"I was always worried about him, whether he was in state or out. He was bitten by scorpions in Texas and a rattlesnake in Georgia and had to have anti-venom shots. Things always happened to him."

What happened to Peter on Christmas day was unexpected, says his mom, Chris Neesley. "Peter always told me he’d be home."

Even though she and her daughter are hospice social workers, adjusting to the loss has been difficult. "It’s different when it’s your own," she says.

Now, with the help of Peter’s Iraqi canine companions, the family is coming to terms with losing him. "We’re absolutely thrilled," Chris says. "Peter adored those dogs."

And for Peter’s 10-year-old nephew, Patrick, having Peter’s dogs will help him through his grief. "Peter was like a father to Patrick," Carey says. "He won’t have his Uncle Peter to call anymore, but he has his dogs to take for walks. It will be good for him."

Support the care and rescuing of more animals in need.

Photos of Peter and his dogs compliments of the Neesley family

Photos of Rich Crook and dogs by Molly Wald