A donut, a cone and a onesie: When Pendleton arrived at Best Friends Animal Sanctuary, he had to wear all three just to keep him from endlessly scratching himself. Because of allergies, the lanky cat was one big hotspot — covered in scabs and missing patches of fur. The more he scratched, the worse his skin got and that led to all the layers of protective gear.

Pendleton was a good sport, though, and as his caregivers bundled him up and started him on his many medical treatments, he took it all in stride. Not only was it all helping his skin feel better, but he was also getting plenty of attention. The worst part of it was not being allowed treats, but that wouldn’t last very long. 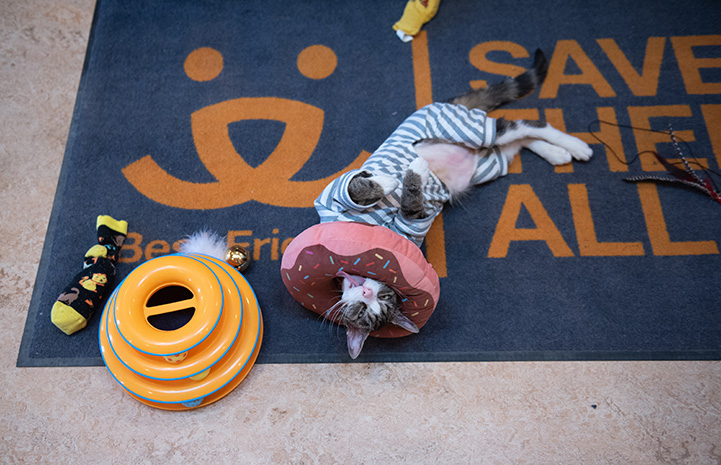 Soothing solutions for an itchy cat

Because the cause of Pendleton’s allergies was a mystery at first, his diet was limited to special allergy-friendly food, and caregivers focused on treating his skin and itchiness. Veterinary staff prescribed him pain medication, as well as ointment and special baths using a cloth covered in a hydrogen-water solution to treat his itchy skin.

“He was so good for his treatments. I think he was so relieved,” says caregiver Bee McCarroll. “He just laid on his back and let me treat his scabs.”

After all, when you’ve been that itchy everywhere for so long, it must feel nice to have someone take care of it all for you. To keep him healing not scratching between treatments, caregivers had to find ways to cover him up. And so, they turned to a tried-and-true favorite for cats with allergies, skin conditions and stitches: onesies. That’s right — baby clothes.

Bee says finding the right clothes for Pendleton was a challenge, even though there was already a large collection from other cats undergoing past treatments. “For one thing, he’s so long,” she says. “Plus, he had torn up his forearms and finding outfits with long sleeves for cats was really difficult.”

Clothes meant for dogs wouldn’t work because they tended to be too large in the neck. It became a matter of layering different clothes to make it all work.

To keep Pendleton from scratching his face, a couple of accessories completed his high-fashion look — a soft cone shaped like a donut and a second cone (the clear plastic Elizabethan collar version). For a while, that was how Pendleton dressed every day. And over time, as caregivers continued to soak, scrub and medicate his skin, he began to heal. The scabs covering his body started to shrink and his fur started growing back, as soft as ever. 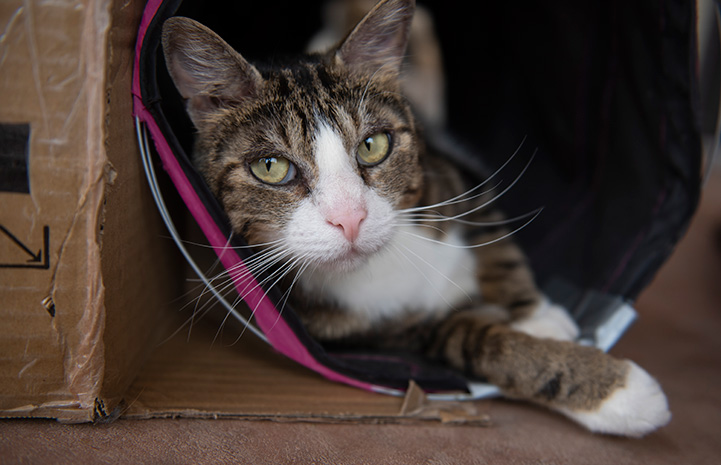 When Pendleton’s allergy panel results came in, it showed a reaction to mites, but nothing to food. Not only was the mystery solved, but since he had already been treated with a flea medicine that also kills mites, the cause of the itching was already treated. There was no need for a special diet. His menu options expanded and boy, was he ready for it. “He was so excited,” says Bee. “He loves food.” 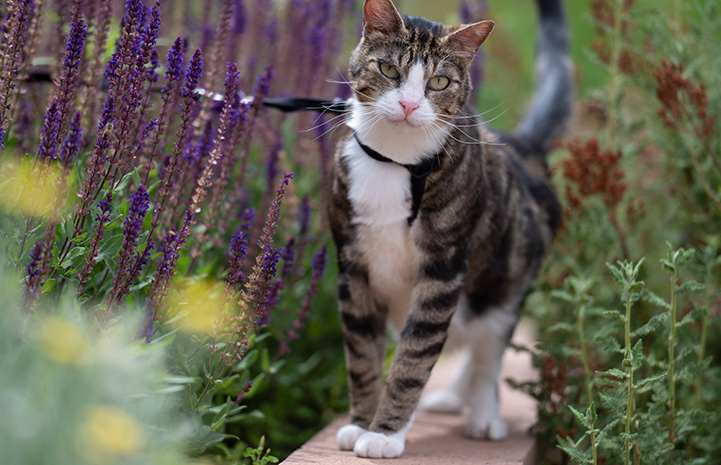 Because Pendleton lives in an area set up for single cats or smaller groups (for personality or dietary reasons), one of his favorite things is when caregivers open up a few of those rooms at lunchtime. He likes playing with his friends, of course, but first things first: He needs to make sure he takes care of their leftovers.

Two of his best friends who also have allergies (Woodrow and Abigail), are on a diet that Pendleton finds absolutely delicious. “He just runs down the hallway, takes a sharp right into their room and he cleans up their wet food,” Bee says.

Pendleton’s also not above begging for his caregivers’ food. “I sit on the floor at lunch and he’ll cuddle,” Bee says. “But then he’s also like ‘What do you have?’ He really wants the carbs.” But for Pendleton’s sake, Bee keeps those yummy carbs to herself, no matter how much he tries to convince her.

Pendleton is doing so well these days that he’s running free down the halls in nothing but his own swirling tabby fur — not a scab in sight. His pain medicine is being tapered down to a stop, and soon he’ll be getting ready to move out of his single room into one with plenty of roommates to make friends with.

In the meantime, he’s going on stroller rides and sleepovers, snuggling up with visitors and volunteers and turning on his charm full force. He’s just waiting for someone to fall in love and take him home. 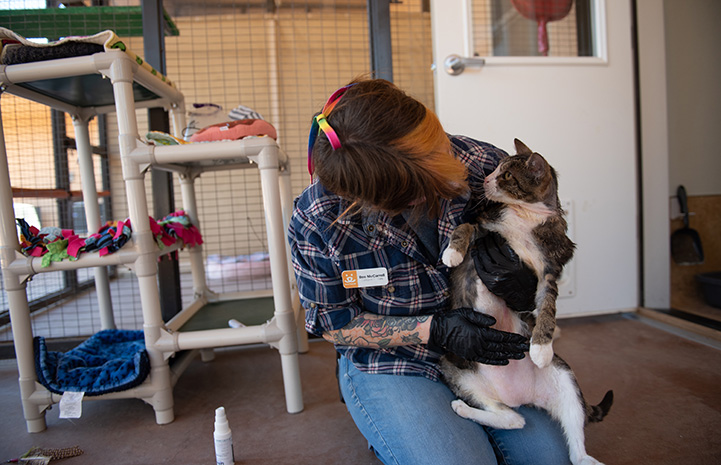 By joining Best Friends, you are helping more pets like Pendleton get back to their happiest, healthiest selves so they can find families and go home.

How a camera flash is helping a feisty deaf cat