Image
Best Friends Animal Sanctuary has a Kids Camp where children interact with, and learn about, many animals: dogs, cats, parrots, horses and more.
By Christelle L. Del Prete 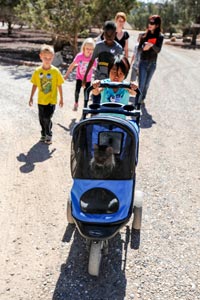 On a Tuesday morning in early June, six eager children followed Kids Camp counselor Keeley Floyd into Cat World headquarters. There they gathered around the reception desk and met lobby cat, Sunny, who was curled up on top of it taking a nap.

They were greeted by Cat World caregiver Heather Henley, who would be their guide for the next 45 minutes. After saying goodbye to Sunny, the children set off on their Cat World adventure.

The activity is part of a brand-new Sanctuary summer camp at the Sanctuary, which runs Monday through Friday from 8-11:30 a.m. Designed for kids six to nine years old – the camp provides community kids, as well as visitor and volunteers’ children who might be too young to volunteer the perfect opportunity to learn about animals.

On this particular day, the kids had already learned some of Best Friends’ history and gotten to know each other a little. Tanner, Jade, Rylan, Mae, Christophe and Jesee were ready to go meet a cat who they could take for a stroller ride.

Along the way, they stopped to peek in on four special felines in one of the kitten rooms. Heather explained that they have feline leukemia (FeLV), a virus that weakens their immune system and makes them more susceptible to getting sick. But all the kids saw was how lovable the kittens were, purring and mewing in their cattery, all vying for attention.

The next stop was Colonel’s Barracks – one of the buildings in Cat World – and the home of Cletus, a former shelter cat who enjoys his stroller rides. As soon as the children piled into Colonel’s, however, a cat named Laddie, obviously smitten with the young visitors, ran up and stole the show. Heather explained that the best way to pet a new cat – even one as friendly as Laddie – is to put your hand out first and let the cat sniff it. So each of the kids took turns letting Laddie sniff them and giving him some love.

Taking a cat for a stroller ride

But petting wasn’t enough for Laddie. He wanted more kid time.  Since Cletus wasn’t there yet, he jumped in the stroller and was ready to go. The kids, delighted by his bold antics, took turns wheeling Laddie’s stroller up and down the road that runs through Cat World.

Though some of the kids already knew quite a bit about cats (Jesee, for example, sometimes helps her aunt raise bottle baby kittens), none of them had taken one for a stroller ride before.

“It’s a great way for them to safely interact with a cat,” says Heather.  “And it’s great entertainment for the cats and the kids. 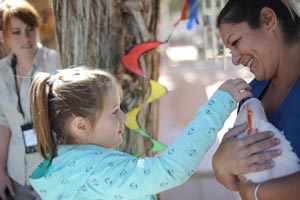 Fun for children and animals

Heather, formerly a humane educator at the shelter where she worked before coming to Best Friends, says it’s nice to see the kids learning and just being around as many types of cats as possible.

“It’s especially nice for the ones who don't have animals at home,” she explains. “And it’s good for the cats to meet new people, hear new sounds, etc. This makes them more adaptable, and thus adoptable.”

During the first week of the camp, the children also visited Puppy Preschool, Horse Haven and Marshall’s Piggy Paradise. And, in between meeting some pretty cool animals, they enjoyed snacks, fun activities like flying kites on the beautiful Sanctuary grounds and making parrot toys and adoption posters. One thing is for sure: both the children and the animals have a summer full of fun to look forward to.

Learn more about the Kids Camp.