They may be one of the world’s toughest hockey teams, but off the ice, players for the Los Angeles Kings have a soft spot for the shelter pets of their hometown. 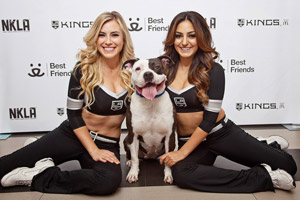 The Kings Care Foundation partnered with Best Friends the last weekend of March to promote pet adoption by posing with adoptable dogs at the NKLA Pet Adoption Center in West Los Angeles, hosting Best Friends at the Kings vs. Winnipeg Jets hockey game, and providing a mobile adoption venue at the Toyota Sports Center during the Kings’ practice.

“We want to give our fans a chance to meet these fantastic cats and dogs and possibly find their new best friend,” says Luc Robitaille, president of business operations for the LA Kings. “Best Friends Animal Society does great work to help the homeless pets of Los Angeles, and we’re happy to support their efforts.”

The pets must have brought a stroke of luck; the Kings won 4-2, making it a winning weekend for all.

Having one of the city’s world-class athletic teams promote shelter pets in Los Angeles was particularly thrilling to Marc Peralta, executive director of Best Friends Animal Society–Los Angeles and a long-time hockey fan.

“By showing such compassion to shelter pets, the LA Kings prove to be heroes on and off the ice,” Marc says. Adoption is crucial to transforming Los Angeles into a no-kill city and helping Best Friends achieve the mission to Save Them All.

“Since we pull all of our adoptable pets from Los Angeles Animal Services, every time you adopt from Best Friends Animal Society–Los Angeles, you’re really saving two lives: the one you take home and the one who will take that pet’s place at our adoption center,” Marc says.

Adopting a dog at the mobile adoption 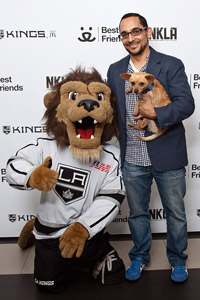 Ed Horta of Highland, California, came to the LA Kings’ practice on Sunday, March 30, to shop at the simultaneous yard sale, but ended up leaving with a new best friend after making his way to the mobile adoption.

“I wasn’t planning on adopting a dog that day, but I had been wanting a small dog for a long time,” Ed says. “I first saw Runner with one of the Ice Girls; the next thing I know, he was in my arms.”

Runner, a young Chihuahua, sealed the deal by putting his paw on Ed’s arm, snuggling in closer, and letting out a contented sigh before falling asleep. Ed says, “The minute my kids saw what Runner did, they said, ‘Dad, you gotta take him home.’ They love animals as much as I do.”

Now officially part of the Horta family, Runner is settling in with his furry siblings: four large-breed dogs, several cats and a parrot.

“Runner gets along with everyone,” Ed says. “I’m happy with him. I really love him.”

Finding a dog at a sports event may have been unusual, but it was a pleasant surprise for Ed. “My hat goes off to the Kings organization and Best Friends. We have to save these animals. We can’t let them suffer,” he says. “I do what I can. We should all work together to help.”

Learn more about how Best Friends is working to get Los Angeles to no-kill at nkla.org.