Little dog was sick and shut down at the shelter, but his foster mom helped turn things around

Image
Little shelter dog, with nubby tail and underbite, is treated for heartworm and mange and is now feeling better and being fostered.
By Christelle L. Del Prete

When Benjamin wags his adorable little nubbin of a tail, you can’t help but smile. And when he smiles, you can’t miss his charming underbite. In the past few months, his stubby tail-wags and toothy smile have become a heartwarming and familiar sight to people at the Sanctuary and to his foster mom, Fredi Miller. Before that, though, Benjamin didn’t have a whole lot to be happy about. Like so many homeless dogs in shelters, he needed help.

Benjamin had ended up in Palm Valley Animal Center (PVAC), a shelter in Edinburg, Texas. PVAC, which each year takes in a high volume of animals (about 28,800 dogs and cats in 2018), was once one of the most under-resourced shelters in the country. With help from Best Friends, PVAC’s save rate soared from 34% in 2017 to 54% in 2018, and this year, it’s on track to save even more lives.

PVAC, Best Friends and other organizations are working together on community programs that reduce the number of animals entering shelters. In addition, many dogs and cats already in shelters are being transported to less-crowded rescue organizations and shelters in other parts of the country, where more adopters make it possible for the animals to find new homes quickly.

Help for a shy dog with heartworm and mange

That’s how Benjamin came to the Sanctuary. Although the cute little dog was starting a new and exciting chapter of his life, he wasn’t feeling well enough to enjoy it.

When he arrived at Dogtown, Benjamin was shut down. He needed some time to get to know people at the Sanctuary and build trust with them. He also needed medical treatment for mange and heartworm. Heartworm disease in dogs is more prevalent in the South, so it’s not surprising that Benjamin had it. Luckily, his case was in the early stages, and vets said that after treatment that included a course of antibiotics followed by several injections, he’d be a healthy pup again.

The vets at Best Friends started Benjamin on antibiotics, began treating him for mange and provided him with plenty of TLC. As he began to feel better, the calm and reserved little guy began to show his sweet and happy personality. That personality won him some admirers. (OK, we’ll admit the adorable underbite didn’t hurt.) One of those admirers was Fredi Miller, a local volunteer. 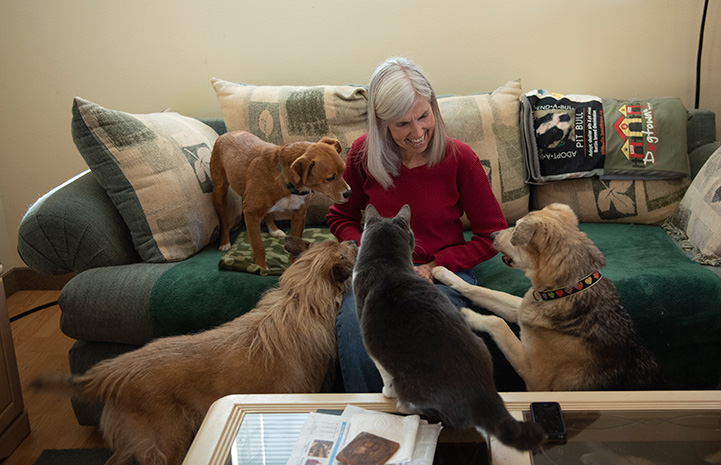 Fostering a dog during heartworm treatment

From the moment they met at Dogtown, Fredi found Benjamin charming. She also knew that dogs’ activity levels are limited during heartworm treatment to keep their heart rates slow and steady.

Because Dogtown is busy during the day, it’s easier to manage activity levels in a quiet home. Fostering dogs during heartworm treatment also means that a shelter (or in this case, the Sanctuary) has more room to help other pets in need — one of the many ways that fostering pets saves lives.

Fredi had previously fostered kittens and a puppy. The puppy had a bit too much energy for her two senior dogs, but she felt that calm, three-year-old Benjamin would be a gentleman around them and he might also respect her cats — particularly Naveen, who has some mobility challenges. So, Fredi decided to give it a try and foster Benjamin during his heartworm treatment. 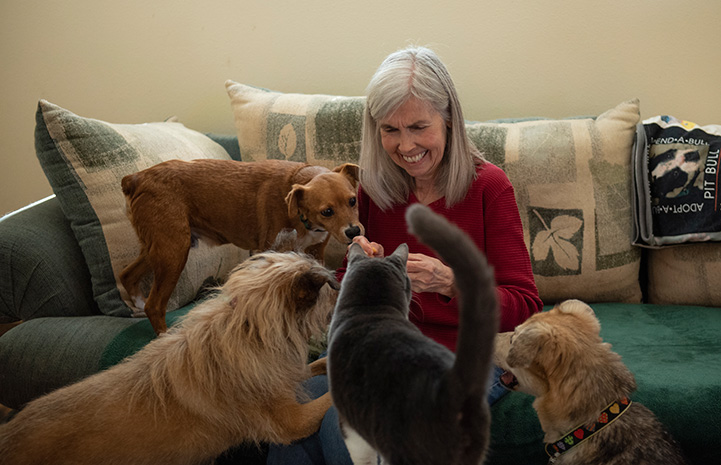 After introducing Benjamin slowly and carefully to her own pets, she discovered that she was right about him. “He is a laid-back, easygoing guy,” says Fredi. “He has such a good energy about him that the cats were super comfortable around him from the start. He gets along with everybody, and he would fit well in just about any home. Naveen lies on the couch with him all the time.”

Benjamin has blossomed during his time at the Sanctuary and in Fredi’s home. Plus, when he’s comfortable with someone, which doesn’t take long, Fredi says he will nuzzle you. “And if he doesn’t know you yet, he’ll walk up to you, wagging his nub tail,” she says.

Benjamin has come a long way from Texas to Utah on his journey to health and happiness. Next stop: a forever home.

You can save a life. Foster a pet near you. 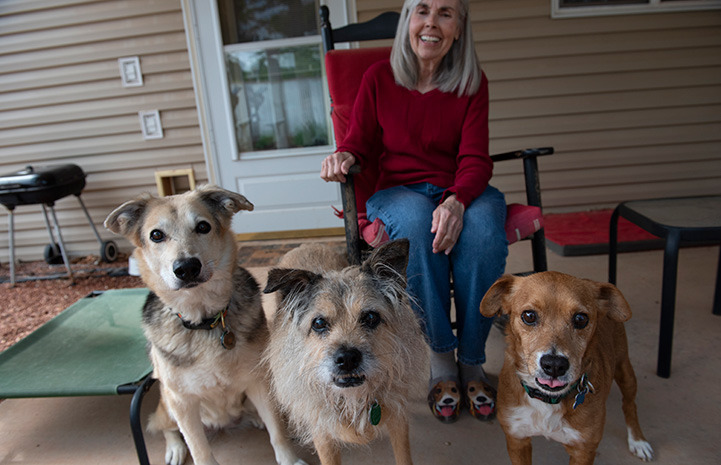