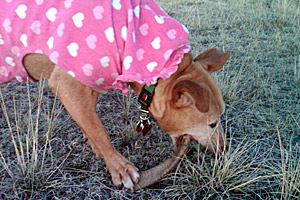 What has surprised you most about Little Red the Vicktory dog?

I'm most surprised by Little Red's joy in her special treats. One day, she found an animal horn in her pasture, and she was beside herself with pride and joy. She carried it around and carefully placed it in her "safe" spot every night. (After she was in for the night, I would go out and put it in a really safe spot in the garage and then return it to her spot in the morning.) She went back day after day until the horn was no more. Now I buy her antelope antlers, and she knows after dinner is her special time to chew. She looks forward to it so much. Who would think a dog who has suffered so much would care about such simple pleasures. Sometimes Little acts like the pup she never was permitted to be. It's an awesome sight.

Her smile. Some people think it looks like a grimace, but I know Little, and it is most definitely a huge smile.

Little's favorite thing to do is what I call "zooming." I have six acres of pasture that is totally fenced for the dogs. I take all five of my dogs for walks in the pasture when the weather is nice. Little will explore and wander on her own. Then she will stop, look up to find me, and if I whistle, she will start to trot towards me. Then she breaks into a full run. She'll head right to me and veer off and circle around me, dart away, come back, and dart away again. At times, it almost looks like a choreographed routine. She twists and turns and races away and comes back. When she decides to end her dance, she runs right to me, takes a sit position in front of me, looks up, and smiles her huge, beautiful smile. 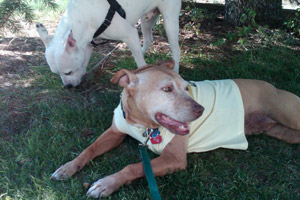 Adopting Little was the culmination of nearly three and a half years of thinking about her and wishing I could be in her life. I volunteer at Best Friends every year and never knew that I could meet her until a few years ago. I asked if I could see her, and the staff took me to her enclosure and took pictures of her for me. The next year, I volunteered in her area again and finally got up the nerve to ask if she was available for adoption. I was so sure that I would never be considered because I had no experience with pit bulls. I also thought there would be so many people who had already applied to adopt her. There weren't. I was the first person to complete an adoption application for her. Of course, there were other people very interested in adopting her, but for various reasons, they weren't able to. So it was my lucky day. From the day I completed that adoption application, I just knew that she would come to live with me and my other dogs. On September 19, 2011, she came home. I love her for her strength and for her lovely, sweet self. She will always be shy, but she has a huge heart and loves to run and play. She doesn't dwell on her past, so I don't either.

What do you think people can learn from Little Red?

Little teaches me lessons every day. I never think that Little has been "rehabilitated." She didn't need to be rehabilitated. She needed to "recover" from the debilitating physical and emotional trauma she experienced for five years as a bait dog. Her recovery is slow, but she knows that I will never hurt her and she will be safe with me and her four other canine buddies. She is part of a family. The predictability of her quiet life in the country has allowed her to blossom and feel confident enough to express pure joy and exuberance when she is running and playing. Little is still frightened by strange noises and unfamiliar situations, but she is able to gather herself and move forward. She is not paralyzed by her fear. I have also learned that the sweetness in her spirit could never be broken by the cruelty she endured. For five years, Vick and his people tried to make her mean. They were not successful. She stayed true to her kind and gentle nature even in the face of the most brutal and abhorrent treatment.

Find out more about the former Michael Vick dogs.