A Look Back At Katrina

a look back at katrina
By Best Friends Animal Society

On the anniversary of Hurricane Katrina, Susie Duttge is spending it with her rescued cat, Nola Vie. "Every day that goes by I think how lucky I am to have her," Susie says.

And Nola Vie is lucky to have Susie. The kitten was one of thousands of pets whose owners were forced to leave when they evacuated the city.

In the end, rescue groups that went into the area were able to pull out about 15,000 pets, first from the water and then from the rubble. Of those, Best Friends rescued more than 4,000. All told, roughly 20 percent of the pets saved by Best Friends teams were returned to their owners. Twelve months later, reunions are still taking place.

Some animals were owner surrendered after the fact, because their families could no longer care for them, like Sasha, a Golden Retriever, and Robin, a chocolate Lab.

But pets like Gizmo, a Jack Russell mix, went home to owners Theresa and Henry Schloner. And so did Skiddles, a tabby cat who looks like a skunk, who was reunited with his person, Pat Murphy, as was Princess, a Siamese cat, who went home to Cheryl Bradley. A Chow mix named Shorty, a Pit Bull named Sable, and a Siberian husky called Brie were also reunited with their families. They, among hundreds of others, got to go home.

For the ones that weren’t reunited, volunteers and animal humane groups from around the country were there with open arms, waiting to give them homes. 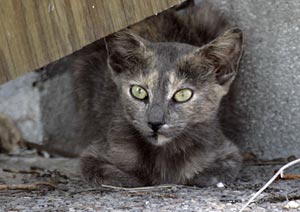 Susie, of Lake Bluff, Illinois, was one such volunteer. She helped rescue Nola Vie, a then-five-month-old kitten, from Plaquemines Parish. "She’s my beautiful, strong-willed, soft-hearted girl," Susie says. "She was the only animal that survived in her neighborhood 5-1/2 weeks after the hurricane."

Susie walked the abandoned, storm-destroyed neighborhood in October with Best Friends photographer Clay Myers. The streets were deadly quiet. Then they heard a weak meow coming from under a house. "We had no trap, and I knew I had only one chance to get her without one," she says.

They lured the kitten out from under the house with food.

"When she wrapped her little paw over my finger and pulled it tight to her, that was it," Susie says. "I told her I would not leave her. I knew at that moment that I would bring her home with me."

As for the pets that remained strays on the streets, today those numbers are decreasing, even if it is slowly, says Virginia Rankin, a New Orleans resident who sits on the board of the St. Francis Animal Sanctuary in Tylertown, Mississippi, where Best Friends set up its temporary rescue and triage center last September.

"It’s better than it was," Virginia says. "It’s not perfect, but it’s better. It’s a concerted effort by different volunteers and groups. People are out there and residents are feeding and watering (the animals). I have teachers at a school feeding cats."

"To this day," Virginia continues, "when we see a dog or a cat on the road, we stop and pick them up. If it’s a mom with puppies, we take them in. We’re here, we’re staying, we’re rebuilding, and we’re doing everything we can for the animals."

Jeanette Althans, who lives in Jefferson Parish, is one of hundreds of New Orleans residents leaving food and water for the pets of Katrina still on the streets. Jeanette and her 12-year-old daughter have been replenishing food stations ever since the storm. She says she’ll continue helping until the pets can be rescued. Animal control officers and local rescue groups are picking up what pets they can.

Immediately following Katrina, when word spread that owners were forced to leave their pets without human companionship and without food and water, a cry of protest rang out from animal lovers across the U.S. As a result, since then seven state legislatures and the U.S. Congress have passed laws requiring that evacuation plans include pets. And more states are considering similar legislation.

"I think the government has realized, all the way from the mayor, the police department, the governor, up to FEMA and the president – at all levels of government -- that some people are not going to leave without their pets, and that’s the end of the story," Virginia says. "People are saying, ‘Take me, take my pet. If you don’t take my pet, so long. I’m not leaving.’"

For the next hurricane, Virginia says, St. Francis Animal Sanctuary in Tylertown, for one, will be ready. "We have a plan on how we’re going to operate in the next disaster. We have generators to pump water and two years’ worth of food for the animals. We’re not going to be caught unaware again. We’ve learned the hard way."

In the meantime, Susie Duttge says her refugee cat, Nola Vie, is thriving since the ordeal of weathering a hurricane alone. "My other three cats let her rule the roost," Susie says. "They’ve understood there’s something different about her from the day she joined our home. She’s a very happy cat and still pulls my fingers to her as she did that day in the rescue truck." The cat’s name -- Nola -- comes from New Orleans, Louisiana, and Vie from the French word that means life.

Susie says she’ll never forget Tylertown and the experience of rescuing animals from New Orleans. It's "made a home in my soul," she says.

For another volunteer, Mickey Short from Minnesota, who fostered a Pit Bull and a Bassett mix, the former Tylertown triage center has become a symbol of the pets who, with help from hundreds of volunteers, were able to move on from the storm. Tylertown, Mickey writes in an e-mail, has become "a state of mind."