Love for a dog with cancer

Image
Dog with skin cancer, squamous cell carcinoma on his underside and melanoma on his ear, finds the perfect home with a couple committed to helping him.
By Christelle L. Del Prete

While Skully lived at the Sanctuary, he had three cancer surgeries at the Best Friends Animal Clinic. After recovering from all of them, Skully was on top of the world. Then things got even better. He got a new home with a family in Pennsylvania — people who were not only in love with him but are perfectly prepared to care for his special needs. 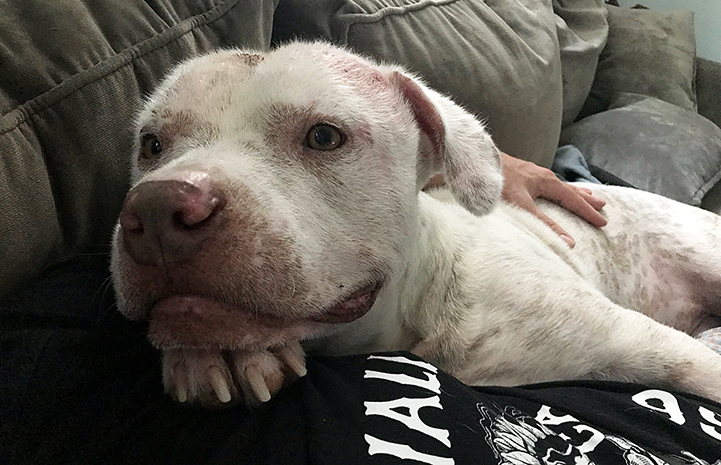 Helping a dog with skin cancer and allergies

The four-year-old dog with golden eyes and big smile already had more medical issues than many dogs in a lifetime. When he arrived at the Sanctuary last August, his white fur was thin and patchy. Allergies had made him itchy all over and caused him to scratch so much that he got secondary skin infections. Skully had also developed cancer on several areas of his body: squamous cell carcinoma on his underside and melanoma on his ear and the side of his body.

Skully started getting regular oxygenated baths in Dogtown’s grooming rooms to help heal his irritated skin and make him feel better. Then, in three separate surgeries, Best Friends vets surgically removed the cancerous spots. That included the entire outer pinna (cartilage) of his ear. Though Skully can still hear, he had to wear special doggie hats called snoods to protect his sensitive skin from the sun while he healed. 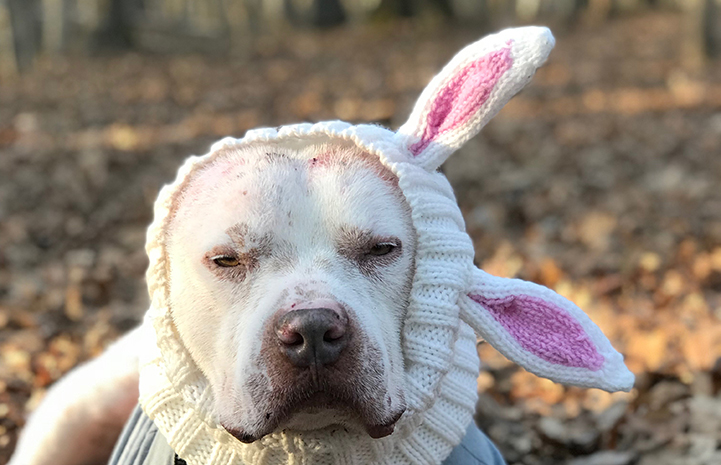 Although Skully was a trooper through it all and bravely won his battles with cancer while he lived at the Sanctuary, no one could guarantee that those battles would be his last. And they weren’t. But his new family is facing the challenges head-on.

When Heather Sheaffer and her boyfriend Bill Clark visited the Sanctuary earlier this year, they were ready to adopt a dog. And when they met Skully and heard his story, they knew he belonged with them.

Heather had been donating to Best Friends for a long time and visiting the Sanctuary to adopt a dog was on her bucket list for years. Before arriving at the Sanctuary in Kanab, Utah, Heather combed the Best Friends website and read about a senior blind dog who she thought might be a good match for her Boston terrier. When she and Bill volunteered at Dogtown, she was hoping to meet the dog she’d seen online. That’s when they met Skully, and everything changed. 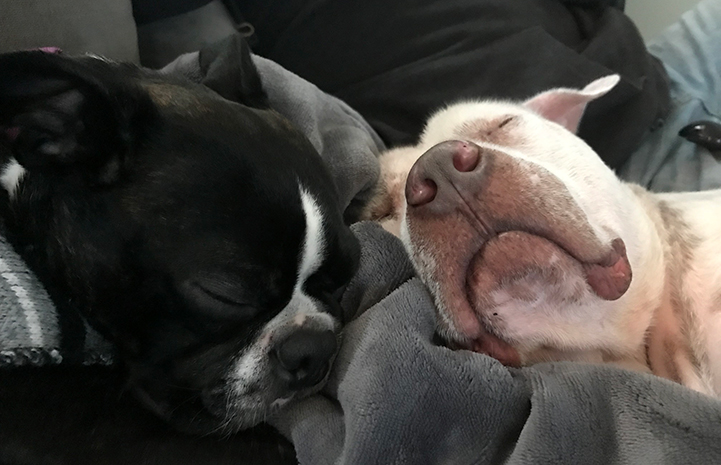 “We were introduced to Skully — a big white smiling pit bull terrier mix with one ear — and we were hooked,” Heather says. “He was clearly smitten with Bill, too, so that didn’t hurt his cause. When we took him on a sleepover, we took long walks together, and Skully cuddled in bed with us while we watched TV.”

It was more than just love at first sight that convinced Heather and Bill that Skully was the dog for them. The couple could not possibly have been more perfectly equipped to help him through his battles with cancer. It was as if Skully was meant to come into their lives, and they were meant to come into his.

“Bill is a nurse who has experienced cancer in his family and has taken care of countless patients with cancer,” says Heather. “I’m the director of patient and family services at the Abramson Cancer Center of Penn Medicine. My job is developing programming and facilitating resources for people with cancer and their families. I’ve had the opportunity to develop the animal assisted therapy program at my cancer center and to introduce the first staff therapy dog. I also cared for two dogs through cancer, so I was up for the challenge.” 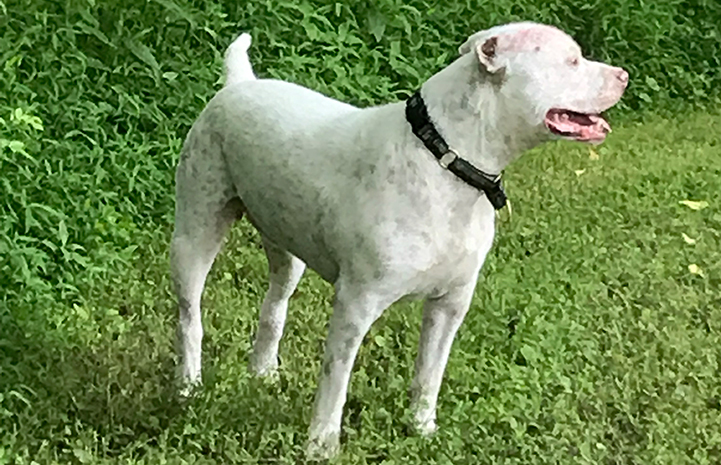 Heather and Bill didn’t immediately adopt Skully, but they couldn’t stop thinking or talking about him, so they applied to adopt him almost as soon as their plane landed back in Philadelphia. “We wanted to give him a home and a family, even if he only had a short time,” Heather says.

Best Friends adoption specialists arranged for him to fly into the Philadelphia airport through the Jet Set Pets program. It’s a Best Friends program that waives adoption fees and provides free flights home for pets with special needs like Skully, or for animals with special requirements, such as needing to be the only pet in the home. 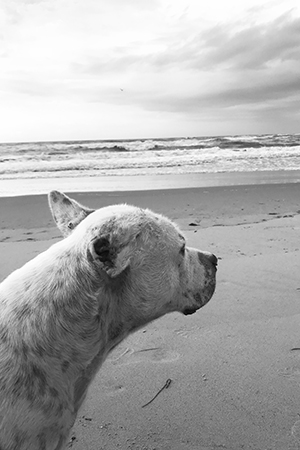 “We anxiously approached his crate in the cargo area that night to see him peering out from the darkness at us,” Heather says. “After so many long months waiting for him, it was an amazing moment and a night to remember.”

Soon, Skully was introduced to his new doggie brother, his new house and city life. He learned how to climb onto a sofa (though he’s not exactly graceful about it). He enjoys spending time outside (in the shade, to protect his sensitive skin from sun exposure) and walks in the shaded woods. He plays for hours with his doggie brother and steals all the covers in bed at night. He’s already had lots of new adventures, including a vacation to North Carolina where he enjoyed walks on the beach. He’s spent a weekend on a farm meeting goats, pigs and new doggie friends.

How a dog with cancer helps connect people

Skully also has made quite a few human friends in the three months that he’s been in his new home. He won over Heather’s mother, who until meeting him was afraid of pit-bull-terrier-like dogs. “Now she proudly wears her “pit bull grandma” T-shirt to the senior center,” says Heather.

With his charming personality, his genuine interest in meeting new people and his appearance (missing ear, freckles and golden eyes), Skully makes new friends just about every time he ventures outside. 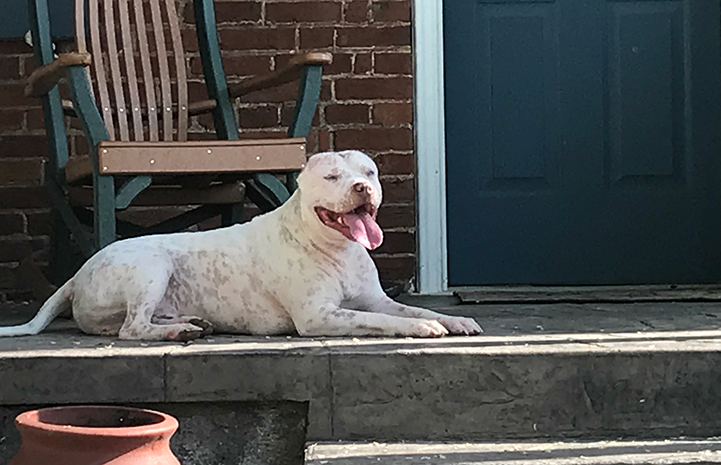 “It gives me a chance to tell his story and talk about all Best Friends has done to help him find his way to us,” Heather says. “Skully is a great example of what adopting a dog with special needs can bring to your life. We’ve experienced incredible kindness from strangers who wish him well after hearing his story. We’ve also connected with a wonderful group of veterinarians at Penn Vet and at Fishtown Animal Hospital who email just to see how his week has been. It’s amazing to see the power of the connections that can be created between people through dogs.”

You might say that connections are key in Skully’s life. Not only does he help people connect with each other, but he’s also made some powerful connections of his own. And because of his connection with Heather and Bill, no matter how many battles he’ll have to fight against cancer, he is exactly where he belongs. 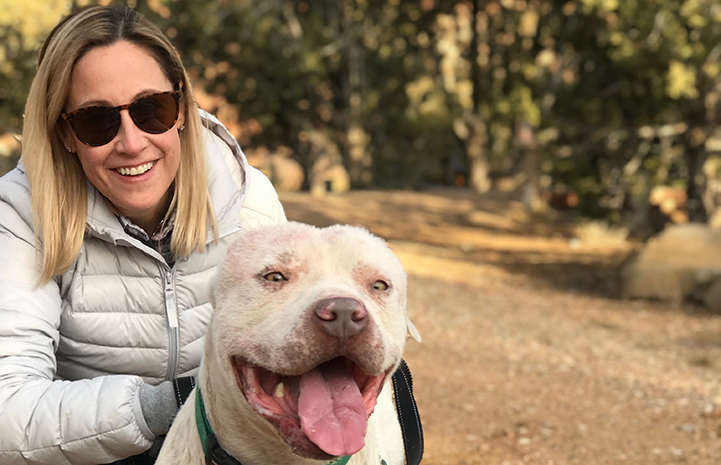