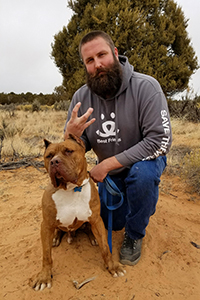 Ludo leaves a lasting impression, whether you meet him for a moment or you’ve known him since he arrived at Best Friends Animal Sanctuary. Originally rescued during Hurricane Harvey, Ludo was brought to the Sanctuary a few months later. Since then, he’s made countless friends among staff and volunteers — and for good reason.

Sure, you can’t miss him: He’s a huge red dog with a giant, slobbery smile and big, soulful eyes. But it’s more than his size that draws people to him. As Dogtown​ behavior consultant Rebecca Woodruff explains: “He has such a presence. If people walk by him, they don’t get very far. He has a gravitational pull.”

Health challenges for a dog who melts hearts

Ludo has melted the hearts of numerous volunteers who’ve taken him on sleepovers. One couple was so moved during a sleepover with him that they decided to sponsor his adoption. But finding Ludo a home was challenging because he’s not good with other animals and would have to be the only pet in a home. And most animal lovers already have other pets.

Poor Ludo has battled one major health challenge after another. First it was bloat, an acute and potentially fatal stomach condition for which he needed emergency surgery. Later, he became ill and had a mass removed from his stomach. Again, Ludo recovered without losing his love for life.

Ludo, who’s estimated to be about four years old, recently received a heartbreaking diagnosis: He has advanced bladder cancer, and because of the tumor's size and location, it's inoperable. “Our time with him may be brief,” says Dogtown team lead Erin Menard. “But if Ludo has taught us anything, it's to be constantly happy and enjoy every single moment of life. He is the most life-loving dog, and we're going to make all the time we have with him amazing.” 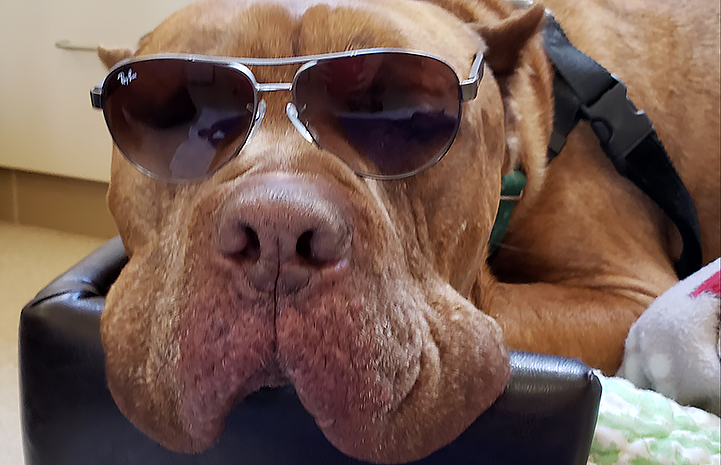 A dog who’s the life of the party

Ludo thinks people are the most amazing thing in the world (well, people and food), so his friends in Dogtown decided to throw a party where he could enjoy both. The turnout was a testament to Ludo’s loving and charismatic personality. “He’s been one of the most popular dogs in the seven years I’ve worked here, and this is probably the most people I’ve seen (in the Dogtown staff room) at once during that time,” says Bryan Elliott who works in the Sanctuary’s shipping department.

During the celebration, surrounded by people and food (including cupcakes made specially for him), Ludo was in his element — the life of the party. While he was being lavished with attention and treats, people called him a gentle giant time and again.

Cassie Rowell, a housekeeper at Dogtown, says: “He’s the perfect ambassador for the gentle-giant-type dogs. He looks intimidating, but he conquers preconceived notions. He's so happy when he's at Dogtown’s front desk, around people. He can be sound asleep behind the desk, and as soon as volunteers come over, he will jump right up as if to say, ‘Hi, I’m Ludo. Do you love me?’” 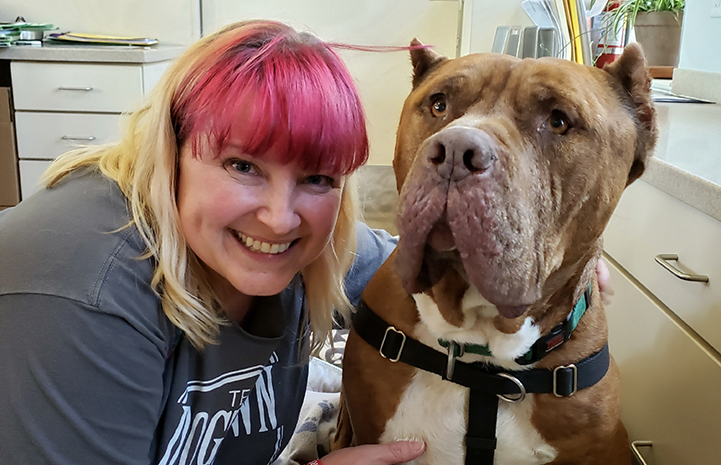 Other partygoers shared funny stories. There was the time, at the front desk, when Ludo picked up a cup of water and emptied the entire thing in Erin’s lap. There was the day when Jan Nyhoff, a volunteer coordinator, rode in the back of the car with him. “There was lots of drool and a head shake, and (drool) was flying all over the car. That was my introduction to Ludo.”

Car rides are certainly one of Ludo’s favorite things, too. Deb Turner, a Best Friends group coordinator, says: “He just wants to sit in the front seat and lick your face. He is a big love, a big pleasure.”

Ludo has lots of little rituals that capture people’s hearts. Dogtown caregiver Star Lopez loves that he joins staff in the lunchroom at least once a week “begging for food and looking adorable.” Penny Nelson-Newman, a local volunteer, appreciates his “help” with laundry, since he loves escorting the laundry cart from the building where he lives in Dogtown to the laundry room. Caregiver Pete Daw gets a kick out of how Ludo “has to paw at every door he passes with his big lion paws when we take him on walks.” Pete also loves walking into the building every morning with Ludo there to greet him. “It’s impossible not to smile with him there,” Pete says.

Ludo has also shared his incredible sweetness with the Best Friends veterinary team and Dogtown groomers which, according to caregiver Stacy Schatz, “is somewhat unique and a blessing considering everything he’s gone through medically.”

When he first arrived at the Sanctuary and lived at Dogtown admissions, he spent hours hanging out with the vet techs who have an office there. “He’d sit in the corner of his room and pout like a child when he couldn’t visit the techs,” says Dogtown caregiver Kayla Riding, laughing. And Emily Adamson, a Dogtown groomer, says: “He’s the epitome of everything good and pure in this world, wrapped up in a dog. He loves everyone and is a joy to groom.” 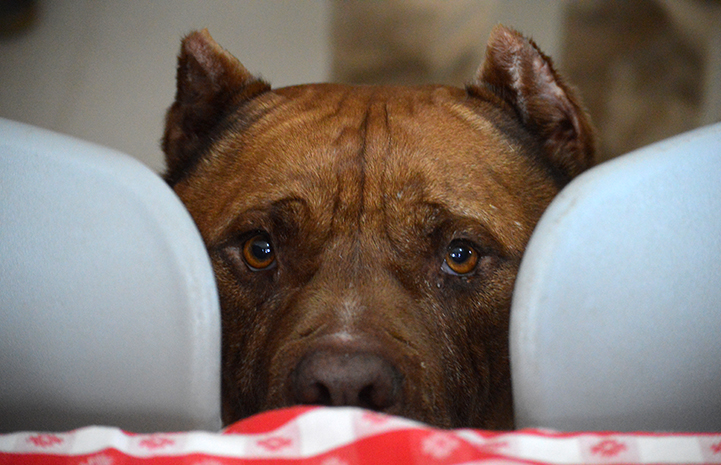 The moments that matter

If there’s one thing Ludo’s truly good at, it’s making wonderful first impressions and then continuing to remind people of his unwavering kindness. Dogtown manager Julie Tasch says: “When we found out he was coming to the Sanctuary after Hurricane Harvey, we had no idea what to expect. But right away he was the sweetest, most loving dog and he fit in immediately here.”

Even now with his illness, Dogtown caregiver Alaina Muinzer says: “He’s such a good boy. It hasn’t affected his demeanor at all. Personality-wise, you’d never know he was sick. He is just so happy when volunteers go in and sit with him.”

Ultimately, it’s not the amount of time Ludo has left that matters. It’s the tender, happy moments he shares with his friends — the people who love him. People like Ryan Schofield (who works in shipping department and takes Ludo for car rides and tosses a tennis ball for him) make Ludo’s life at the Sanctuary complete. And Ludo gives back — in sweet, slobbery kisses and a love that never dies. 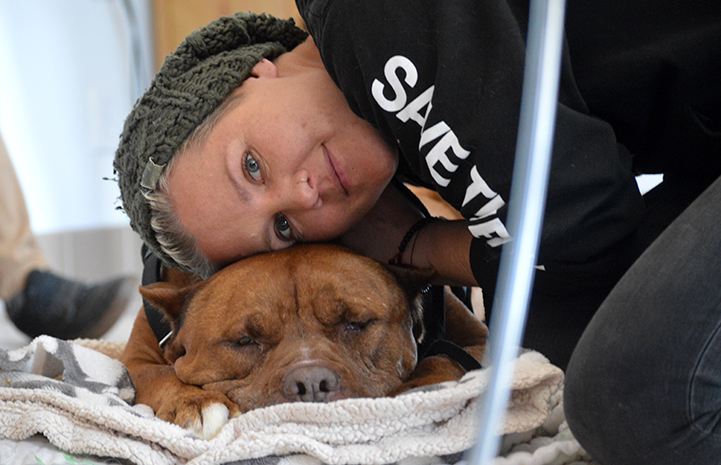