Loving a parrot with special needs

Image
Affectionate, happy and fun blue and gold macaw parrot with medical issues, the most obvious of which is she holds her head upside down, is adopted.
By Christelle L. Del Prete 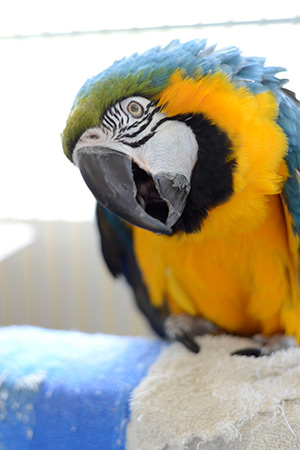 Crystal might not look like other parrots, but the blue-and-gold macaw’s sweet personality has always outshined the things that make her different. And though it took a while to find her a new family after she landed at Best Friends a few years ago, today Crystal is happy at home with a family that saw something special in the bird that others had once looked at as a lost cause.

From the time Crystal was hatched in 1990, it was clear that she was no ordinary parrot. She holds her head upside down most of the time, and her feet and toes don’t work very well. She has problems with both of her ears and is blind in one eye. On top of all that, she has chronic respiratory issues.

Despite her challenges, with extra care Crystal feels pretty good. Her daily regimen includes taking medication, having her beak washed whenever she needs it, receiving a breathing treatment each morning and evening, and having her feet checked regularly for signs of pressure sores.

Before coming to Best Friends, Crystal lived in a New Jersey vet clinic with an avian vet who adored her. Unfortunately, when the vet passed away and the practice was sold, the new owners didn’t see Crystal as a happy and loving bird who was different. They saw a bird with so many problems they thought it would be best to euthanize her.

Quality of life for parrots

The techs at the veterinary clinic, however, saw the beauty inside of the bird that many called damaged. They knew that Crystal was affectionate and that she had fun playing with toys. They saw, too, that she genuinely enjoys her life and that she delights in good food. So the techs got together to help Crystal get to the Sanctuary, where she became a beloved member of the Parrot Garden family.

Crystal was welcome to stay at Best Friends as long as she needed to — even if that meant she’d be there for the rest of her life. But her caregivers thought that, somewhere, there might be a new family for her.

“There is a home for every bird, but sometimes it takes longer and we have to have faith that the right people will come along,” says Jacque Johnson, manager of Parrot Garden. 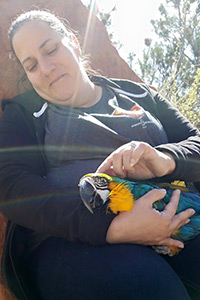 As fate would have it, this past June — four years after Crystal arrived at Best Friends — Donna Dempe and her family drove from Oklahoma to the Sanctuary in Kanab, Utah, to find a feathered friend who could become a family member. When Crystal saw them, she did what many birds do: She chose the people she wanted to go home with instead of quietly waiting for them to choose her.

She got their attention by loudly calling out to them “Uh oh,” which is her way of saying hello to people she wants to impress.

The rest is history. Donna met a few other birds in Parrot Garden before making her final decision, but she already knew in her heart that Crystal was the one she’d be bringing home. Best of all, Donna was undaunted by Crystal’s medical needs. She had worked in home health care for many years, and she was confident that she could handle whatever Crystal would need.

Crystal traveled back to Oklahoma with Donna and Robert, leaving behind those who cared for her between homes. “We know Crystal is in great hands and will have the most loving, caring home,” Jacque says.

Parrot with special needs settles in

Since leaving the Sanctuary, Crystal has settled happily into her new home. She loves lying on Donna’s chest while they watch TV, or perching on her shoulder. She’ll sit on Robert’s shoulder, too, although at first she was a little skeptical of him. "She's a mama's girl," Donna says. “She said ‘mama’ just the other day, and she called out to my son, Evan, as well.”

Besides hanging out with her people, Crystal also enjoys regular feasts of fruit (her favorite being fresh pineapple) and homemade “birdie bread” with healthy ingredients such as shredded coconut, oatmeal, nuts and baby food. “She enjoys it so much that if she’s outside of her cage and sees someone put the bowl inside, she can’t get in there fast enough to get it,” Donna says.

As for Crystal’s daily medical routine, Donna has it down pat. And Crystal’s not only feeling great these days, but she’s also letting more of her silly, quirky personality show. 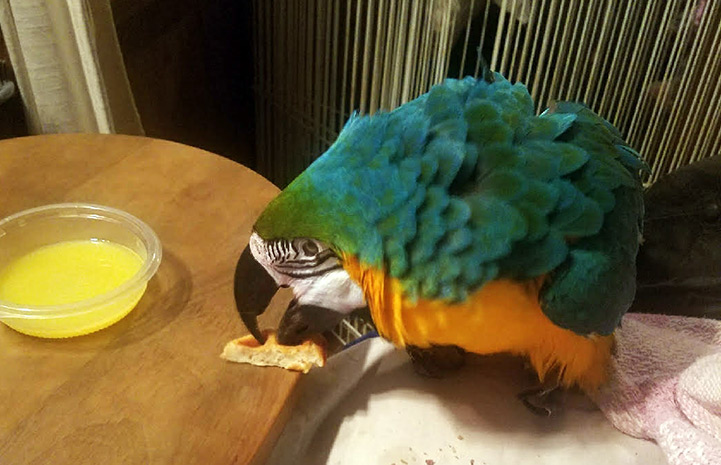 Happy and spoiled at home

“She does this Stevie Wonder-style roll with her head and she says, ‘What, what.’ She is so much fun and she has made a big impact on the family. She’s made life better here,” Donna says, “Everyone pitches in to help her, and we thoroughly enjoy her. She’s really happy and spoiled.”

In her new home, Crystal isn’t seen as one-of-a kind because of her physical differences. It’s her sweet and silly personality that makes her one in a million. 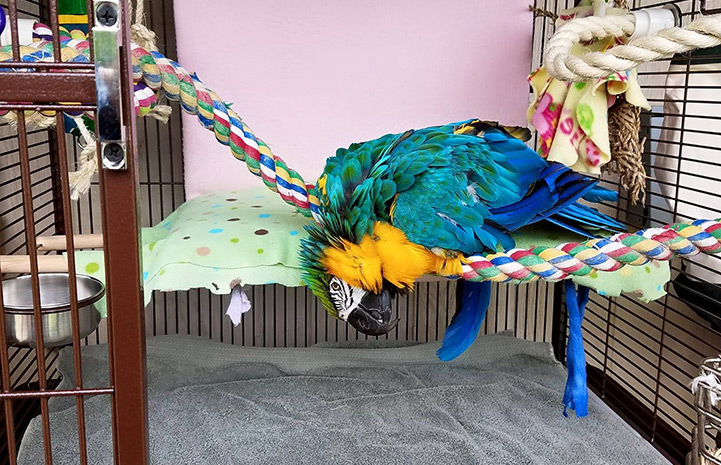