Image
Best Friends Spay/Neuter Clinic in Ogden, Utah, offers low cost pet sterilization. Read story of one man who got a mom cat and her kittens fixed.
By Kelli Harmon

Missy Two is one smart cat. When she first laid eyes on Danny Glover (not that Danny Glover — this gentleman is not an actor, and he lives in Utah), she must have been able to tell that she could trust him. Because as she stood outside his home she looked up at him and meowed, then walked a few steps away. Then she looked back and meowed again. “She was trying to get me to follow her,” Danny says.

Maybe it’s because he’s got a soft spot for animals, or maybe it’s because the little stray looked just like a cat named Missy that he’d had for years, but Danny played along and followed the cat a short distance. That’s when she showed him what she needed help with — her litter of five tiny kittens.

Helping a stray cat and her litter of kittens

Some people would have just gone about their day, filing away the encounter with the little feline family as interesting, but nothing more. But Danny set out food on his patio for the cat and her kittens. Over the next several days he coaxed the cat and her kittens indoors, using kindness and patience. And as he grew more and more attached to the cat (who he named Missy Two) and her kittens, there was one thing of which he was certain.

He wanted to have her spayed, so she wouldn’t ever have to worry about caring for a litter again. And when he decided to keep the whole family of cats, he realized he was looking at a major expense to get them all fixed.

Fixing cats on a fixed income

While Danny didn’t know it at the time, a Best Friends program would help him to take excellent care of his once-homeless cats. That’s because Danny lives near Ogden, Utah, where the Salt Lake City area’s second Best Friends Spay/Neuter Clinic had recently opened. The clinic was made possible by a more than $575,000 three-year grant from PetSmart Charities®, and the goal is to spay or neuter 18,500 Utah cats and dogs in the facility’s first three years.

Before he learned about the Best Friends Spay/Neuter Clinic, Danny took Missy Two to a private veterinarian, where he says it cost $150 to have her spayed and vaccinated. That’s a big expense for someone like Danny, who lives on a fixed income, but he made it work because he knew how important it was to have his new pet spayed. But that also meant it would cost more than $700 to have the other five cats spayed or neutered and vaccinated.

“I couldn’t pay it,” Danny says. But the thought of finding new homes for the kittens or taking them to the shelter was not an option. He had committed to the cats, and now they were part of his family. So he did the only two things he could think of: He started saving up, and he called around to find out if there were any less expensive options. 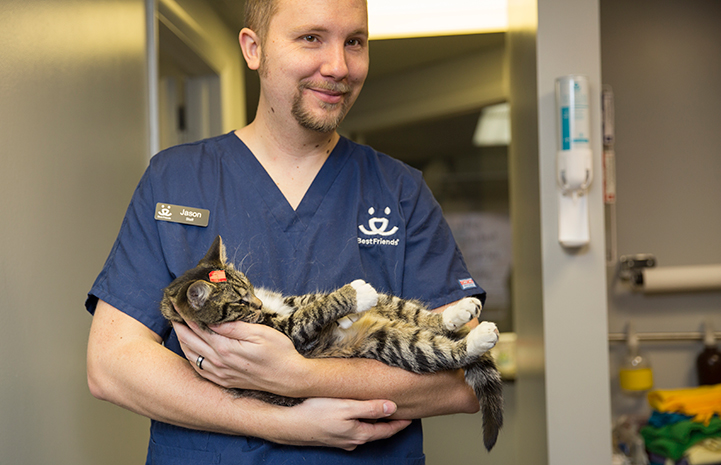 Free spay or neuter services: Even better than low-cost

That’s how Danny learned about the Best Friends Spay/Neuter Clinic near him. Tiffany Deaton, spay/neuter services manager, remembers the day Danny showed up with all of Missy Two’s five kittens, now fully grown. She says, “He was very excited that our clinic had opened because he’d been saving up get his cats spayed and neutered.” It would cost just $10 for each surgery, which is the exact same procedure and quality found at private veterinarians, but thanks to generous funding from PetSmart Charities, it is offered at a cost that makes it available to just about everyone. But Danny’s cats stood to benefit even more than he first expected.

Tiffany explains, “After discovering that Danny was a candidate for our low income voucher program, we were able to get all of his cats fixed at our clinic at no cost.” And best of all, Danny could use the funds he’d saved up for surgery to have all his cats fully vaccinated that day.

Spay/neuter is key to reaching no-kill

Since it opened, the clinic’s services have been in high demand, not only from Utah residents like Danny, but also for area shelters and rescue groups. The clinic fills a much-needed role in the No-Kill Utah (NKUT) initiative, designed to bring the entire state of Utah to no-kill, which means all shelters in the state would be saving at least 90 percent of pets entering their doors.

Arlyn Bradshaw, executive director of Best Friends–Utah says: “Our Best Friends spay/neuter clinics are vital to achieving no-kill for Utah. We serve our shelters, NKUT Coalition members, and in this case with Mr. Glover, our Utah residents who simply cannot afford the surgery costs at many private veterinary clinics."

Danny still thinks about his cat who passed away before Missy Two and her kittens came along. “We had her 17 years, three months and three days,” Danny says. “It really tore me up when she passed away.”

While his new cats don’t replace her, they do fill the void she left behind. Going from one cat to six is a big leap, but Danny was happy to give them a home, because he had help in getting them the care they deserved. “I couldn’t have done it without all the help with spay/neuter and vaccines,” he says.

And of course since Missy Two is so smart, she must know that she asked for help from the right person the day she came across Danny, because she and her kittens now have a home for life. “I can’t see getting rid of any of them. They sleep with me all night. Now we’re all family.” 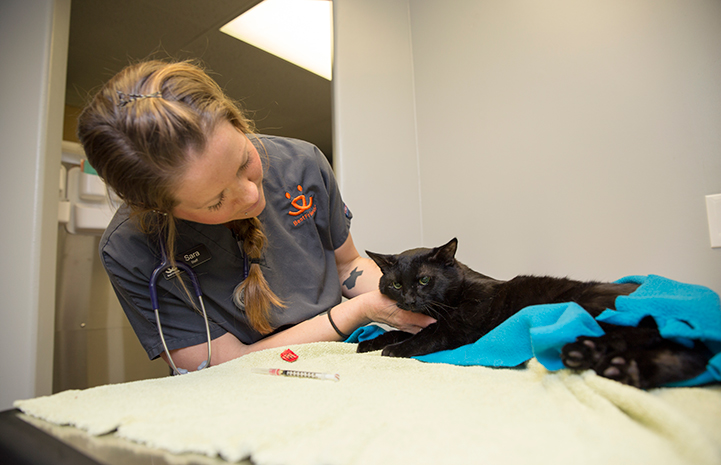