At about 120 pounds, Luther the bloodhound, who came to Best Friends from a shelter in northern Utah, looked positively gigantic compared to the litter of puppies frolicking at his feet. Though Luther wasn’t related to the hound puppies, their play dates were fun, and the older, wiser hound taught the pups valuable lessons that they couldn’t learn from their human caregivers. 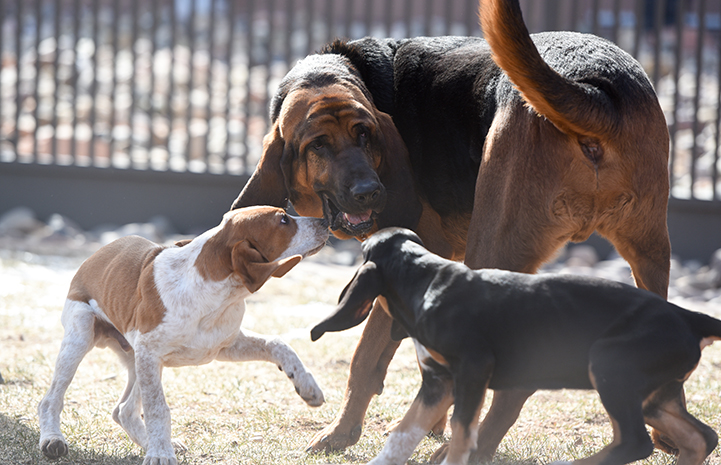 From the moment he arrived at the Sanctuary, Luther’s caregivers could see he was a gentle giant. And though he was eight years old, he still loved to play like a puppy. Other adult dogs didn’t know what to make of the huge, frolicking bloodhound, so they stayed out of his way. 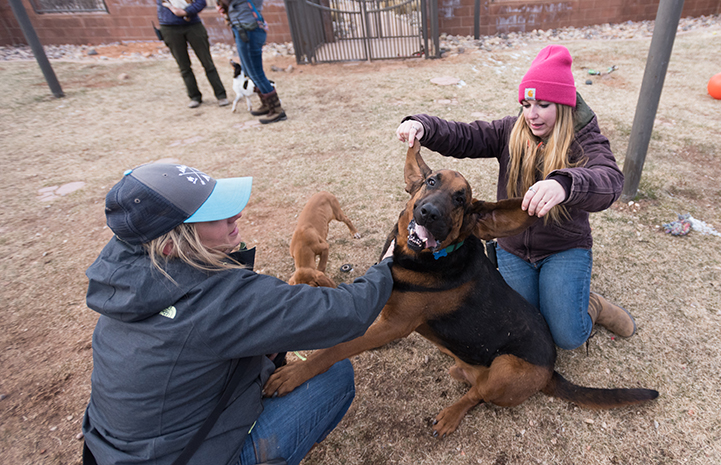 Caregivers tried pairing him up with an eight-month-old puppy named Bamboozle. Despite the age and size difference, Bamboozle leapt in, and Luther began playing with him. It was the perfect match, and the two were paired up as roommates for the rest of their time at the Sanctuary.

When a litter of hound puppies arrived, caregivers couldn’t wait to set up play dates with the pups and Luther. It would be fun for Luther and helpful for the puppies’ socialization. 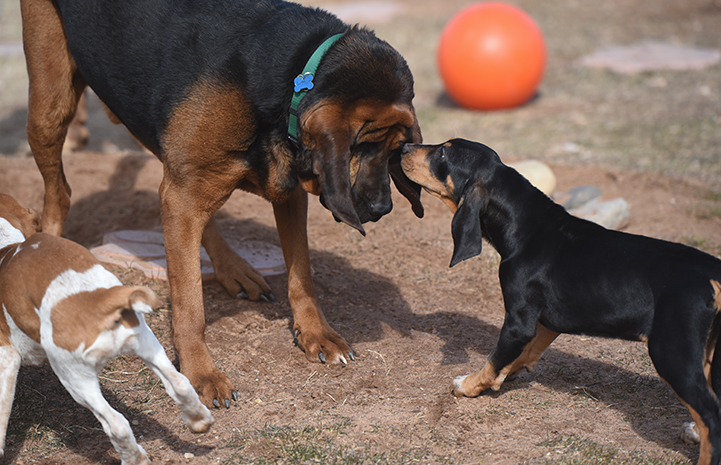 How to socialize puppies

Thinking of adopting a puppy?

When Luther was introduced to the hound puppies, whose names were Mallard, Eider, Ruddy, Pintail, Merganser and Wigeon (after different kinds of ducks), it looked like a hound dog family reunion. “They spoke each other’s language with all their howls and bays,” says Dogtown caregiver Danielle Smith. They began playing — and playing hard. 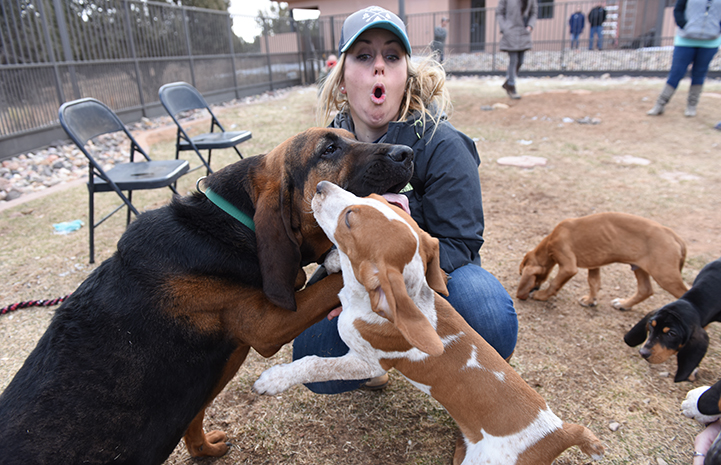 As adorable as it was to see Luther playing with his young roommate and bouncing around with a litter of puppies, there was more to the fun and games than meets the eye. Puppies learn important life skills during their time in Dogtown’s puppy preschool, which coincides with the critical puppy socialization period, which takes place when the puppies are between three and 16 weeks old. 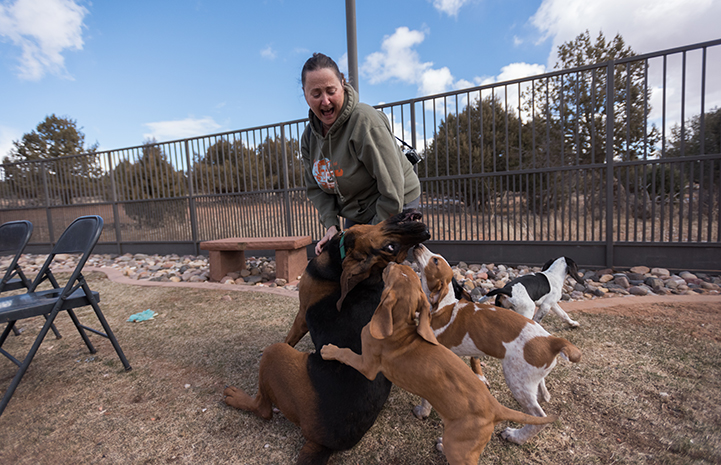 While socializing puppies is largely the responsibility of their human caregivers at the Sanctuary, some lessons can only be taught to the puppies by other dogs. One of those lessons is how to play appropriately with fellow canines. Puppies begin learning these skills from their mothers and littermates. Caregivers then match them up with puppy-friendly adult dogs who can help further their puppy socialization and education. 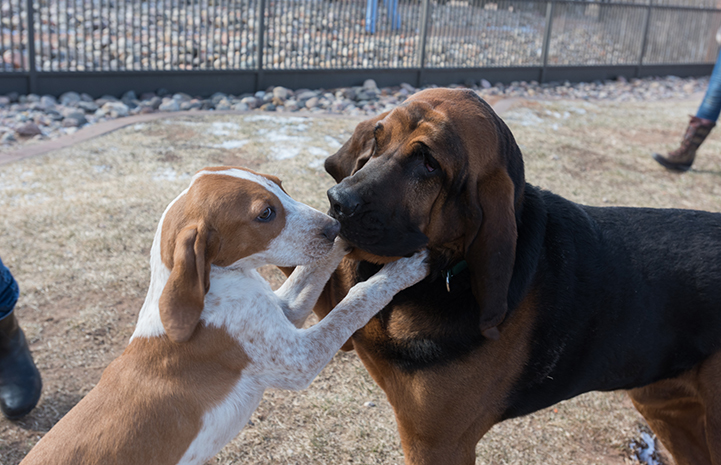 “It’s good (for puppies) to see new adult dogs,” explains Danielle. “Puppies are like babies, and adult dogs can teach them when they are being inappropriate — like if the pups are biting their feet or jumping on their heads. A dog with good skills can correct them gently and appropriately.” 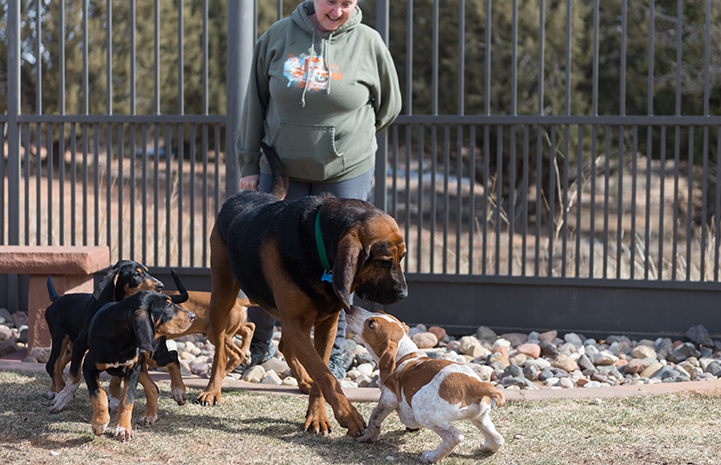 Even though Luther at first seemed surprised by his good fortune — not just one, but six puppies to play with — he soon fell into the role of “Uncle Luther,” gently playing with and coaching his younger charges as they followed him around the play yard.

Uncle Luther continued his coaching until, one by one, his puppy pals started getting adopted and leaving the Sanctuary for homes of their own. And, not to be outdone by his young students, Luther soon followed suit. 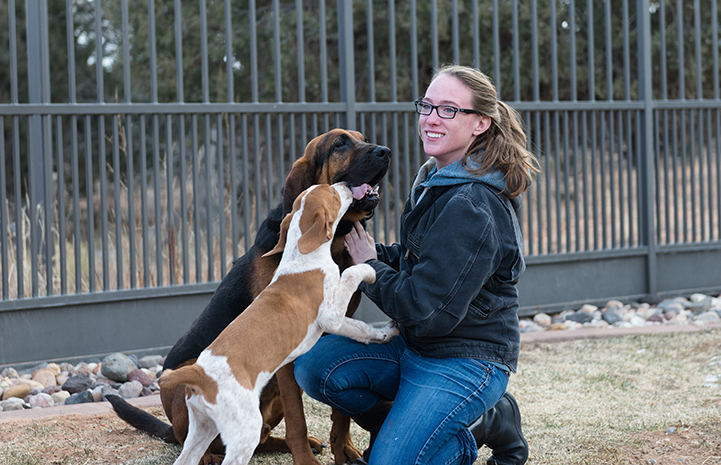 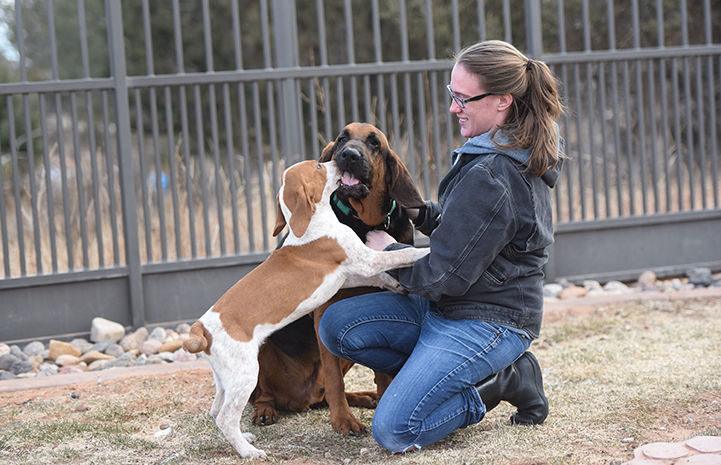