Image
Maine coon tabby cat from Hurricane Animal Shelter is spayed (thanks to a BISSELL Pet Foundation grant) and is then adopted.
By Denise LeBeau 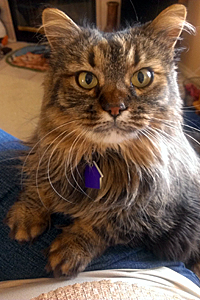 Poppy Sue, a stunning Maine coon tabby cat, spends her days amusing herself and everyone around her. She’s always up for a game of chase, and her adoptive folks, Jenn and Hans Christensen, happily oblige. When the couple discovered she loves to play with shoelaces, they hung them throughout their house.

It’s hard to imagine that someone abandoned this beautiful girl, but before she became part of Jenn and Hans’ home, she was picked up as a stray by Hurricane Animal Shelter in southern Utah. She required quite a bit of help (including some from Best Friends) to get out of the shelter and into her forever home. But luckily, help was there when she needed it.

Hurricane Animal Shelter staff and volunteers tried to assure Poppy Sue that she was safe in their care, but the frightened cat appeared to distrust everyone around her. The kennel atmosphere was not a good fit for her temperament, and she started swatting and growling at everyone. The solution was to find a foster home for Poppy Sue, but first she had to be spayed. “The first item on our agenda was to get her spayed,” says Linda Melin, animal control officer at the shelter.

That’s where Best Friends played a part in helping Poppy. The clinic at Best Friends Animal Sanctuary in Kanab, Utah, offers free spay/neuter surgeries to pets in area shelters and with rescue groups. And this year, Best Friends is helping nearly 400 more pets like Poppy, thanks to a $10,000 grant from BISSELL Pet Foundation.

Stephanie Macgill, Best Friends development manager who works on foundation partnerships, says the grant is a lifeline for some of the more underserved shelters of southern Utah. “We have perfect mission alignment with BISSELL Pet Foundation,” says Stephanie. “While we are among many groups that the foundation supports, the grant allows us to help other organizations, like municipal shelters that don’t have the resources to get an owner surrender or stray animal spayed or neutered quickly.” 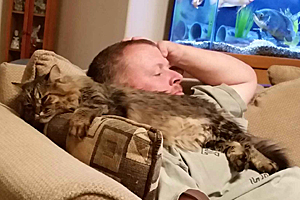 Linda says, “Because of the services Best Friends provided, it was the easiest of tasks getting Poppy into her forever home.” Once the pretty cat was spayed, shelter staff were able to place her in a foster home, where she was much happier.

Not long after that, her foster mom was volunteering at a local pet adoption event, but Poppy Sue couldn’t attend because when she’s in a cage she gets upset and lashes out. But when Jenn and Hans stopped by and mentioned they were specifically looking for a Maine coon cat, the foster mom knew where to find one. They went to her house and within minutes of sitting in a bedroom waiting for Poppy Sue to make an appearance, the beautiful cat sat on Hans’ lap and began purring nose to nose. They adopted her on the spot.

“BISSELL Pet Foundation does so much for animals across the country, like Poppy Sue,” says Stephanie. “Their support of our work means an additional 371 homeless animals will be spayed or neutered and go from homeless to home in a fraction of the time.”

Keep the successes coming by giving to the animals.

Learn more about spay and neuter.