Eleven-year-old Jenny Boxer from Sacramento, California, is afraid of clowns. She’s also afraid of gigantic walking stuffed animals, as commonly seen in certain theme parks that feature a mouse as their spokesperson. So when somebody asked Jenny where she’d like to go – if she could go anywhere in the world – she didn’t have to think twice. She wanted to come to Best Friends.

Jenny has a brain tumor. A year ago, while on a family vacation to Hawaii, Jenny was experiencing dizziness and headaches. Doctors discovered the cause – a tumor located on the brain stem, a place that makes the tumor inoperable.

She’s been fighting hard ever since and is doing great today. This kid has some serious courage. Most people undergoing chemotherapy have sessions just once or twice a month. Jenny has been having five to seven sessions a week for the past year. What a courageous kid.

When the Make-A-Wish Foundation learned about Jenny, they asked her if she had a wish. The Make-A-Wish folks have connections most people can only dream of. The world is truly their oyster to offer. If a kid wants to spend the day at Disneyland and then have dinner with Brad Pitt, they can make it happen.

But Jenny threw them all for a loop. They’d never had a child wish to work with animals before. In fact, Jenny’s case worker at Make-A-Wish said she’d never met a kid before Jenny who didn’t list Disneyland in their top three choices.

"Disneyland is overrated," Jenny says. In fact, after spending several days at the sanctuary, she now defines things a bit further. "California is boring compared to Best Friends." 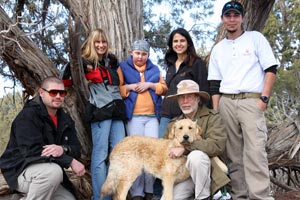 Jenny wanted to come to Best Friends because she loves animals. In fact, that description almost doesn’t do it justice. She cherishes animals, and finds most of them to be smarter than people. (Psst … you may be onto something there, Jenny!) To Jenny, animals are loyal and reliable. There’s nothing fake about them. They don’t wear masks. She loves their company.

For three days, Jenny visited the whole sanctuary, taking in every corner she could. She walked dogs, played with cats, and held parrots for the first time in her life. She cuddled rabbits and hung out with horses. The whole trip was one big treat after another. "I thought Best Friends would be cool," she explains, "but it’s even better than I expected." At the end of her trip, she had something else to say: "I don’t want to leave."

Her parents, Brian and Mary Jane, have been Best Friends members for years. They’ve never been to the sanctuary before, but have loved every minute of their visit. The whole family enjoyed the trip and can’t imagine a better place to have gone for the big wish. They definitely plan to return. Jenny, you keep on fighting. We’ll be right here waiting for you.