Image
Though Benny the Manx cat has Manx syndrome, which makes him incontinent, this doesn't make his life any less joyful. He is a truly happy cat.
By Christelle L. Del Prete 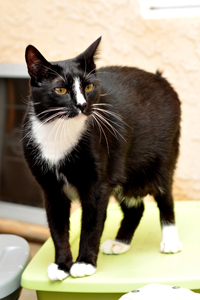 Being fully present and living in the moment doesn’t always come naturally to people. It’s a way of life some of us have to actively strive for, but it’s one that our animal friends seem to have mastered. Spend just a few minutes with Benny and he’ll show you how much joy there is in living in the moment.

Benny lives in Quincy house. It’s the part of the Sanctuary where some of the most special-needs cats live. His room is called the “incontinental suite.” That’s where cats like Benny (those who have trouble taking care of some of their most basic needs on their own) live. Many, including Benny, are Manx cats with Manx syndrome.

Manx cats carry the gene for shortened tails. It’s an endearing quality and part of what makes them a unique breed. But sometimes the gene causes Manx syndrome, which shortens a cat's entire back end and prevents the spinal cord, organs and muscles from developing properly. Because it often causes incontinence, poor Benny had a hard time finding a home at the humane society where he lived before he came to the Sanctuary.

Cat too busy living to worry

But the young cat doesn’t waste any time worrying about bad genetics or the impact they’ve had on his life. He’s far too busy living. While he likes to spend exceptionally cold or rainy days curled up in his bed, napping, he’s a cat who wants to be out and about. It’s as if he’s afraid he’ll miss something if he spends too much time in bed — so he keeps a sharp eye out for fun and adventure.

His caregivers like to indulge his playful spirit. “He’s interested in everything around him, and gets into everything,” says Cat World caregiver Felicia Fullerton. “If you take a toy out, he goes for it instantly. Everything is fun and entertaining to him.” When Felicia put a crinkly cat tunnel toy down on the floor, Benny was the first cat to investigate and to crawl into it. Nothing keeps Benny down, even though he’s different from most other cats. 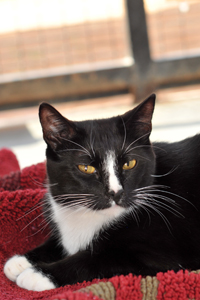 But he’s never happier than when he’s chasing a feather toy across the room. Even first thing in the morning, when he’s barely awake — if a string toy goes by, Benny will sprint out of bed and leap into the air with eyes wide and paws outstretched. Though he’s a year and a half old, he is undisputedly “the kitten” among the eight cats in his room.

He is full of joy, like a seven-year-old (human) boy, his caregivers say. That’s caused some of the other cats, including Mousie and Marvy (who also have Manx syndrome), to take on big brother roles since Benny moved in last June. But they don’t seem to mind having a goofy little brother around.

Life isn’t always feather-and-string toys for Benny. He needs a good amount of help with grooming and gets two to three baths per day to keep him clean and comfortable. But while those might not be his very favorite moments of the day, they never put a damper on what Benny does with the rest of his time. Once he is clean and dry, the spunky, free-spirited cat goes right back to doing what he does best — loving every minute of life.