Image
Amber Kohnhorst was on her way to volunteer at Best Friends Animal Sanctuary when she fell while hiking in Cane Beds, Arizona. She has now recovered.
By Christelle L. Del Prete

When Amber Kohnhorst volunteered at the Sanctuary this summer, she did many of the same things volunteers do every day. In Horse Haven, she brushed horses, mucked pastures and became smitten with a mammoth donkey named Speedy. In Dogtown, she cleaned yards, prepared meals and practiced training cues with a dog named Comet. These are everyday activities, but it's not every day that you meet a volunteer like Amber.

“It was a breath of fresh air to drive up past the Best Friends sign and know I finally made it there,” Amber says. But to those who know her story, her arrival at the Sanctuary seemed more like a miracle. 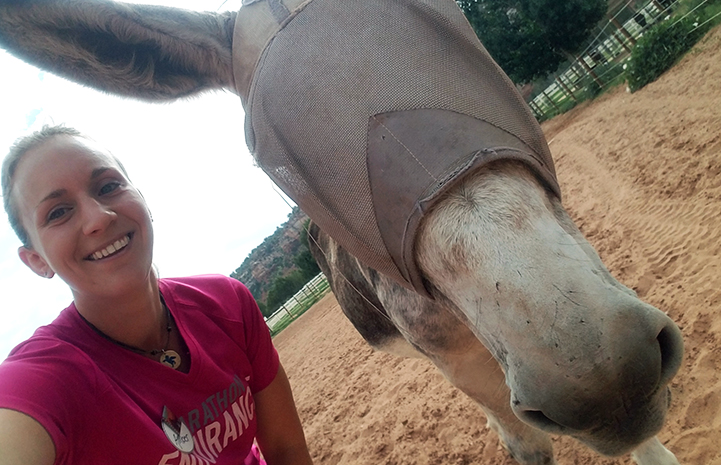 Last May, Amber tried to make the same trip from her home in Rochester, Minnesota, and made it as far as the Cane Beds in Arizona (about an hour from the Sanctuary) where she stopped for the night.

When morning came, however, she did not show up for her scheduled volunteer shift at the Sanctuary. The evening before, while out on a hike to find some petroglyphs, she lost her way as it started to get dark. She’d climbed 800 feet up into the cliffs and began to panic when she realized she couldn’t find her way back.

As the sun rose over the Sanctuary the next morning, Amber was miles away and in a desperate situation. She’d lost her footing and fallen 100 feet down into a narrow canyon. The thin ledge that she landed on was the only thing keeping her from plummeting down again.

Stunned after a brief loss of consciousness, Amber didn’t know what had happened. She only knew that she was badly injured and that she needed help, so she began calling out and blowing her whistle repeatedly, hoping that someone would hear it and come to her aid.

Meanwhile, checkout time came and went at the place where Amber had checked in, and the owners became concerned when they discovered that Amber’s bed hadn’t been slept in and that her rental car and all her belongings were still there. They called Best Friends to see if she had arrived for her shift but she wasn’t there.

Once it was clear she was missing, the small community in the Cane Beds came together to help search for her. It still took 28 hours for a search-and-rescue team to find her. And because of the narrow canyon where she was trapped and high winds that made it nearly impossible for the rescue helicopter to land, it would take nearly six more hours for them to get her safely off the ledge and on the way to the hospital.

Waiting alone on that ledge, Amber wasn’t sure she would survive, but as soon as help arrived, there was no question. She would recover and keep moving forward in her life.

First, though, the 25-year-old nurse who works in the Mayo Clinic’s cardiovascular surgical ICU, would experience a profound role reversal. With a fractured back, pelvis, nose and many other injuries, she found herself on the other side of the bed — a patient rather than a nurse.

After 10 days in a Utah hospital, Amber was transported to the Mayo Clinic, where she finished out her hospital stay. But when it came to spending the required 10 weeks of bed rest in a skilled nursing facility, she refused. “I knew I would recover much more quickly at home with my family and my pets,” she says.

Amber’s family brought her home and took care of her. During her recovery, a constant stream of family and friends visited to offer support. She was cheered when perfect strangers made generous donations to her Go Fund Me page. And she received many care packages, including two from Best Friends that contained, along with other goodies, two paintings done by dogs at the Sanctuary that still hang on her wall.

During those long weeks of bed rest, Amber’s constant companion, the family’s 11-year-old Jack Russell terrier, hardly ever left her side. “He would curl up right here,” Amber says, pointing to the space right beside her chest, by her heart. “Physical contact with a pet is so important, and animals have a large influence on healing,” she says. 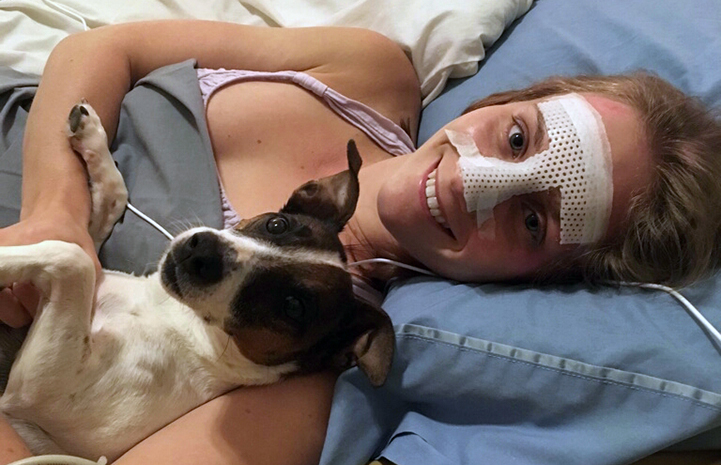 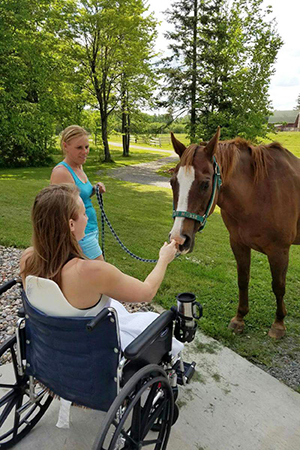 Amber had the courage, strength and tenacity to stick out those weeks of bed rest and endure the months of physical therapy that followed. She also had some important personal goals and milestones to motivate her along the way.

Last October, she went to Ireland on a trip that had been planned before her accident. She worked really hard on her recovery in order to make the journey, and then in December she returned to work at the Mayo Clinic. After being on light duty for several months, Amber has since returned to her job of caring for patients.

“It's been really challenging physically and mentally," says Amber, who loves her work and is grateful that her experience of being a patient has made her a better nurse.

This spring, she returned to her volunteer work at Can Do Canines (an organization that trains service dogs for people with various challenges) and RideAbility, which offers therapeutic horseback riding for children and adults with special needs. In June, she was thrilled to get back on her own horse for the first time and to take a much-anticipated and highly therapeutic ride.

Finally, in August, she returned to southern Utah to thank everyone who had been involved in her rescue and hospitalization, and to make her long-awaited (and now triumphant) trip to Best Friends.

Returning to the area was an emotional experience that forced Amber to face her fears. “I was scared to come back, but I can't let fear dictate my life,” she says. “I was very excited to go to Best Friends and do what I had meant to do.”

She was also excited because this time she brought her whole family along so she and her mother could experience the Sanctuary together. “The fact that my mother volunteered with me made it even more special,” she says. “She had been at my side through each obstacle I’ve overcome this year — from my hospital bed in Utah to getting back on my horse in Wisconsin and revisiting the site in Arizona one year later. So I am grateful we could take in the atmosphere of Best Friends together. It is such a comforting place.” 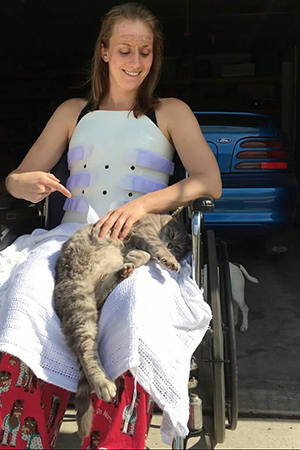 Amber found much of that comfort in Cat World, especially in one of the areas for cats with special needs. “You could see the joy and love radiate from the special-needs cats,” she says. “Their ailments didn’t stop them. As humans, we can learn a lot from these cats. Life is about enjoying what you can with what you have.

“When I was on bed rest for 10 weeks following my accident, I kept thinking about what I was going to do afterward. I had to redirect my attention to the present. Some of my most memorable moments with family and friends occurred while I was on bed rest. My life wasn’t on hold. I just needed to open my eyes to the many wonders surrounding me. I feel very blessed.”

Amber has started sharing her incredible story of survival, recovery and hope with the public through various speaking engagements. She’s happy to be alive and excited about what the future holds. Instead of dwelling on the tragic part of her story, she uses her experience to find more kindness and compassion in herself and in the world.

Even with her busy career, she’ll continue to dedicate as much time as she can to animals. “Because it makes me happy,” she says. She even hopes to make a yearly volunteer trip to Best Friends. After all that she’s overcome and all that she’s achieved in the past year, there’s no doubt that whatever challenges may lie in her path, Amber will make that happen.

About volunteering at Best Friends 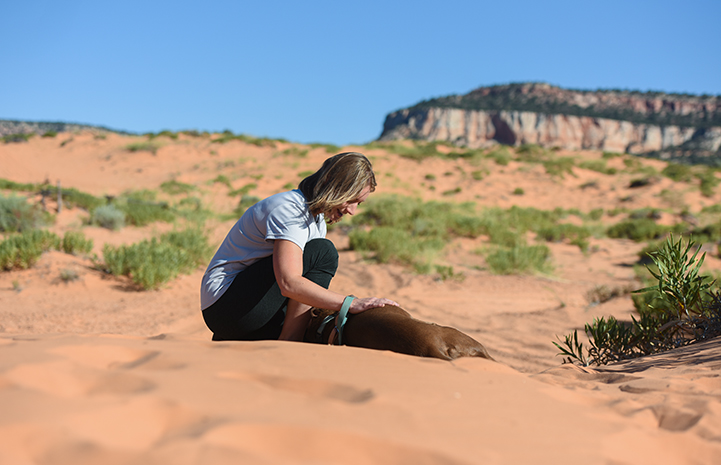 Photos by Molly Wald and courtesy of Amber Kohnhorst