When Michelle Arlotta came to Best Friends in 2009, she wasn't looking for a pet. She was attending the How to Start an Animal Sanctuary workshop with her sister Christie. During their visit, Michelle and Christie spent some time in Dogtown and took a senior dog named Kimbo on a sleepover. He made quite an impression with his loving personality and puppy-like face, but the sisters had a rescue organization to start, so they had to say goodbye. 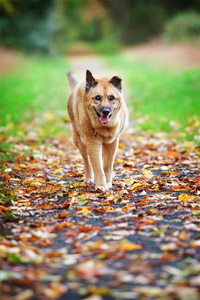 Back at home in New Jersey, armed with the knowledge they'd gained at the workshop, Michelle and Christie finally launched Karma Cat + Zen Dog Rescue Society, a dream that had been years in the making. Little did they know that their little rescue would be celebrating its third anniversary this April). At the time, Michelle found herself preoccupied with thoughts of Kimbo, even though she wasn't in a position to adopt him then.

Nine months later, however, she was, and Kimbo was flown out to New Jersey. Their reunion marked the beginning of a time of healing and love for Michelle and the older dog, both of whom had suffered a similar loss. Michelle had lost her father when she was 10, and Kimbo's people had passed away when he was the same age.

Despite their connection, Michelle knew that taking on a senior pet would not be easy. By the time of his adoption, Kimbo was 15 years old and on several medications. He couldn't do stairs. He couldn't be left for long periods of time because of separation anxiety. As he got older, Kimbo's physical and emotional needs increased, and he became more and more dependent.

A wellspring of strength

But the extra work involved in caring for Kimbo didn't matter, because Michelle realized that what he gave back made it more than worth it. She found a wellspring of strength within her old friend, and his strength brought out her own. Kimbo made it clear that he not only adored her, but also lived for her. When Michelle, a photographer, was unexpectedly delayed during a business trip, Kimbo started going rapidly downhill, but when she returned, he rebounded and was more spirited than he'd been before she'd gone.

Still, Kimbo was a very old dog, and his time grew shorter and shorter. On a Friday in mid-April, he nestled himself into Michelle's arms and closed his eyes, giving her a silent sign that he was ready to go. Though Michelle was crushed by the loss, she also felt a sense of peace at his parting. They may have barely had three years together, but the love they'd shared would last a lifetime. 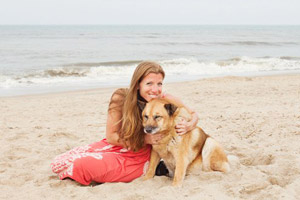 Reflecting on the experience, Michelle says that she would adopt a senior pet again. Too often, she says, people turn older animals down, fearing they carry too much baggage with them, but she's found that, "given love and patience, animals learn to trust again and can transform and change the world in their own small ways." She also asserts, even though you might have less time with a senior animal, "the time you have with them does not have a direct relationship with the love you will experience. That will come from how much you open your heart, how much you are willing to give and to receive."

Adopt a dog of any age from the Sanctuary.