Louie the military macaw is no stranger to medical issues. He came to the Sanctuary after losing his home when unfortunately, one of his family members became terminally ill. Though he was only 15 at the time (still pretty young for a bird who can live up to 80 years), Louie had some problems of his own.

All of Louie’s health challenges seemed to be congenital. He was born with sinus and air sac problems that caused him to breathe through his mouth. While it’s not the most comfortable way for a bird to breathe, he seemed to handle it pretty well. His feet, however, were another matter entirely. 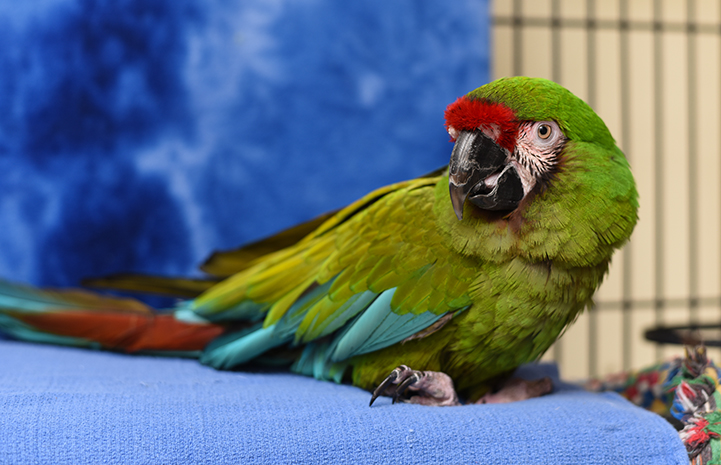 Bird foot anatomy can vary from species to species, but parrot feet all have one thing in common. They are zygodactyl, which means they have two toes facing forward and two facing back. It's one of the specifications for being considered a parrot,” says Jacque Johnson, manager of Parrot Garden. Those forward- and backward-facing toes are perfect for comfortably and effectively gripping branches and perches.

But Louie’s feet aren’t shaped quite like other parrots’ feet. He walks differently and has a hard time perching for any length of time. The poor bird’s toes are so misshapen that he can barely grip a perch at all, and he is prone to getting pressure sores where the perch digs into his heels. In fact, Louie’s feet hurt so much that he had taken to hanging on the side of his cage by his beak. That would be uncomfortable for any bird, but it was an even bigger problem for Louie, since he also has to breathe through his mouth. 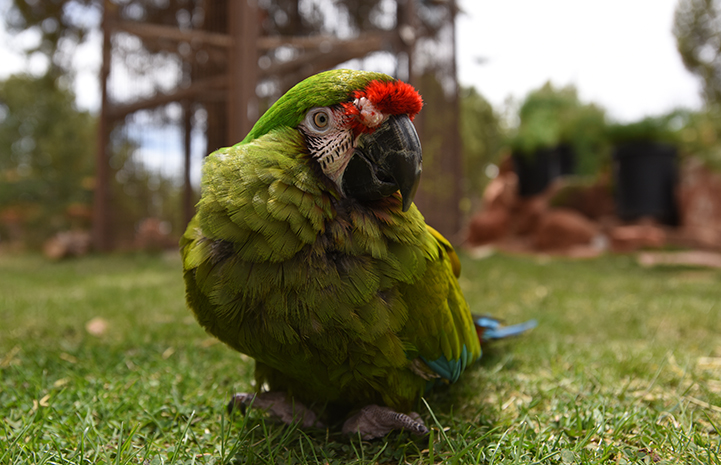 Taking the pressure off

Best Friends vets and Parrot Garden caregivers immediately went to work on finding solutions that would make Louie happier and more comfortable. That meant finding creative ways to help him take the pressure off his feet — other than hanging by his beak.

Offering Louie different surfaces on which to perch was the key to freeing him from pain. But it wasn’t as simple as it seemed, because Louie is frightened of anything new. While other birds might find new kinds of perches interesting and fun, Louie found them terrifying and didn’t want anything to do with them. He needed a little help adjusting to the very things that could help him the most.

Enter Parrot Garden caregiver Kaila Huhtasaari. She started giving Louie lots of extra attention and love, and soon the two formed a solid bond. That meant that Louie would let Kaila hold him on her lap a few times a day to give his tired feet a break from perching. Of course, Kaila couldn’t hold Louie all the time, and he needed something comfortable to rest on during the times he was in his cage.

Caregivers looked online and found the perfect parrot tent — a sort of playpen that could hang in Louie’s cage. It had a heavy-duty plastic bottom with lots of cushioning for comfort. This seemed like it would be just the ticket, but it was going to take Louie time to get used to it. Because Louie trusted his caregiver, he let Kaila hold him on her lap on the tent bed.

At first, Louie didn’t know what to think of it, but his suspicion slowly faded as he realized it wasn’t going to hurt him. He began to sit on the parrot tent when Kaila laid it on a chair outside of his cage. When he did that, he got lots of praise and reassuring head scratches. Next, Kaila hung the tent bed on the outside of Louie’s cage so he could see it while he was inside, yet not feel crowded by it. Eventually, she was able to hang it right in Louie’s cage, so that he could rest on his belly and chest whenever his feet or his beak got tired. 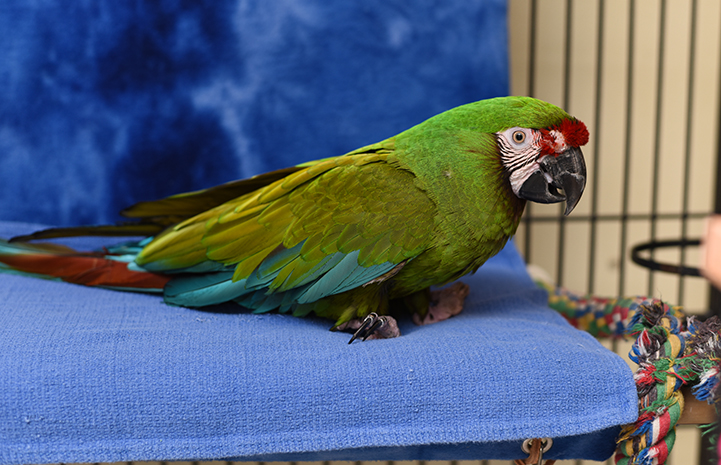 Putting your feet up

These days, when the weather is nice, Louie likes to spend time outdoors. He even has a special cage in the Parrot Garden yard. His caregivers have lined it with rocks and padded it with towels so that the uneven surface is soft. That way, he can practice standing on different parts of his feet to avoid those pesky pressure sores.

Of course, Louie still gets to hang out on Kaila’s lap, and he even enjoys short walks outside in the soft grass. Every day, he gets to use different parts of his feet to stand and walk on, and he gets nice breaks from standing when he lies on his belly. To Louie, it’s more than a welcome reprieve from the discomfort he once endured. It’s like putting your hot, tired feet up after a long, hard day at work and breathing a deep sigh of relief.

Help bring hope and healing to more animals like Louie 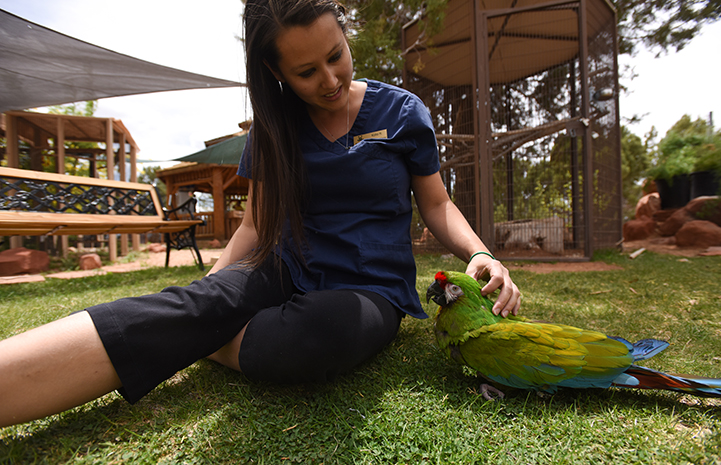