Image
Family bought micro piglet, but she's not a teacup pig. She'll grow into a 100 to 200-pound potbelly pig. She's growing and learning at the Sanctuary.
By Christelle L. Del Prete

Paisley was so tiny and adorable when she first arrived at Marshall’s Piggy Paradise that everyone who saw her squealed in delight. But the so-called teacup piglet wasn’t ready to meet and greet people. They’d have to wait until she was comfortable and confident enough to let them pet her irresistible pink-and-black nose and to rub her itty-bitty potbelly.

After being purchased as a “micro pig” for hundreds of dollars, Paisley lived briefly in a home where she was overwhelmed by dogs and children. The experience made her wary of new people and places that she wasn’t sure who or what was safe. She arrived at the Sanctuary so skittish that she dashed away from people when they walked up to her enclosure. But all of that was about to change. 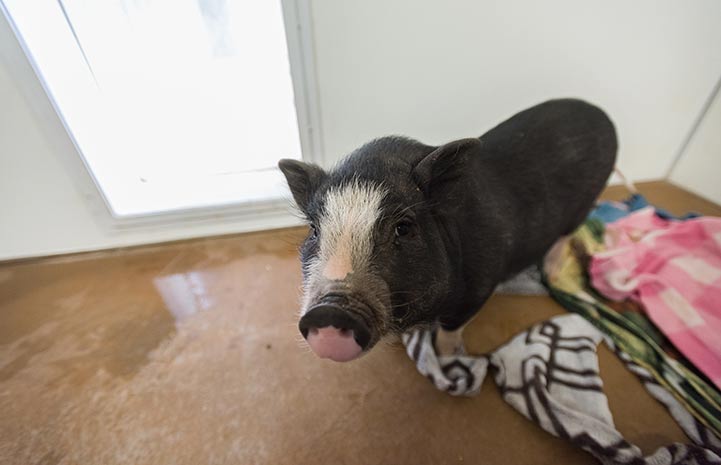 ‘Teacup pig’ not as advertised

At three months old and weighing 20 pounds, Paisley certainly looked like a miniature pig or pocket pig. But, like all piglets bought and sold as mini pigs, she is in fact a baby potbellied pig. Paisley has a lot of growing to do: The average adult size of a potbellied pig is 100 pounds, though they can reach up to 200 pounds.

Learn the truth about ‘micro’ or ‘teacup’ pigs

Being a baby, Paisley also has a lot of learning to do. The first and most important lesson she had to learn is that people aren’t scary.

Since first impressions are lasting ones, Sanctuary caregivers and trainers took this crucial step slowly. The goal was to coax Paisley just far enough out of her comfort zone for her to have a good experience with people and, therefore, to start making some positive associations with humans. But they had to be careful not to push her so far that she would become frightened, because that would only reinforce her skittish behavior and set back her socialization.

For her first few formal introductions, all Paisley had to do was come close enough to people so that they could toss her a few irresistible dried fruit and nuts. Though at first she scampered away like a little mouse, she soon ventured back to sample some prunes and apricots. It wasn’t long before she was edging close enough to nibble almonds right out of people’s hands, her little white-tipped tail wagging happily. 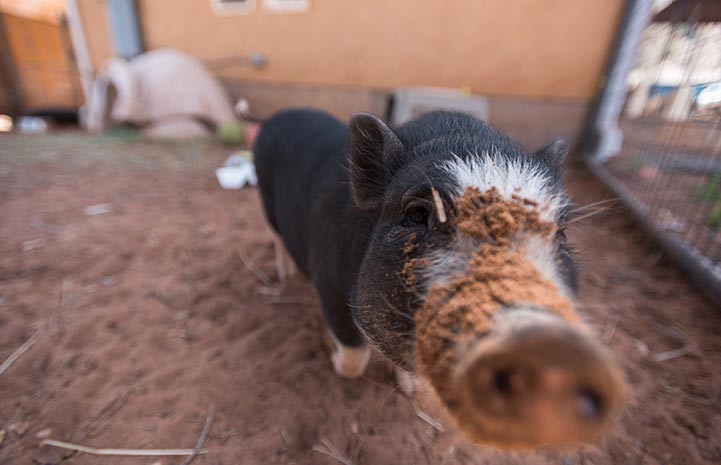 How to train a potbellied pig

Paisley caught on quickly that people usually bring pockets full of sweet treats (and that they tend to ooh and aah over her). In no time at all she was running up to her gate to greet people while making excited little grunting sounds.

As Paisley continued to gain confidence, she started to branch out and try new things. She mastered going in and out of a piggy door that separated the indoor and outdoor areas of her enclosure. She ventured into a shallow wading pool to enjoy her first real mud bath. She’s been meeting other nice pigs (through a gate at first) and has even made the acquaintance of a pig-friendly dog.

Just a few short weeks ago, Paisley wasn’t comfortable with people petting or touching her. To get her used to human touch, her caregivers began letting her rub up against their hands while she was eating. “It was always her choice and not forced,” says caregiver Jorah Cohen.

Paisley has since discovered that getting petted is pretty amazing. She’ll roll over and let people rub her pink-and-black belly. And she’s become a little shadow, following her caregivers around and going for walks with volunteers. 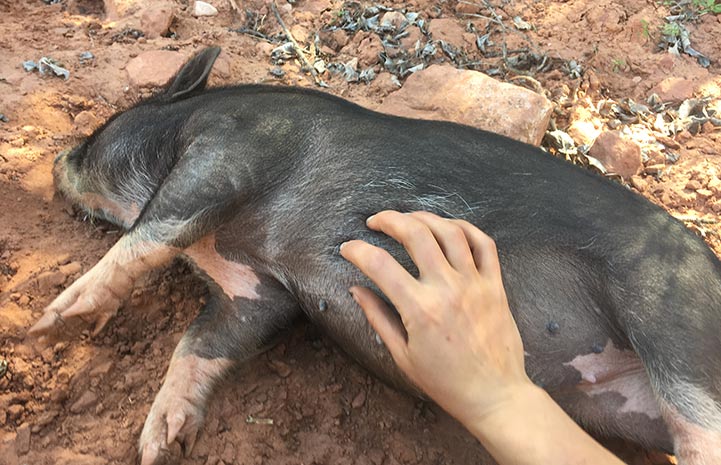 Of course, like any young piglet at Marshall’s Piggy Paradise, Paisley is also learning how to recognize and respect the boundaries of people and other pigs. Her caregivers want to make sure she’s able to accept lots of love without becoming pushy or rude about it. They also want to make sure she can socialize successfully with other pigs. These are important life skills for a potbellied pig.

Paisley is learning these skills by playing Parelli Natural Horsemanship games with her caregivers. The games, which aren’t just for horses, teach her to respect boundaries in a kind and gentle way.

For example, Jorah uses a tool called a carrot stick as an extension of her arm. By waving it back and forth in front of her body, creating a moving visual barrier, Jorah shows Paisley how to keep a respectful distance from people.

Much like a child whose parents have good leadership skills and the ability to set clear rules, Paisley appreciates having structure in her life. “When she begins to understand the boundaries I set, it relaxes her,” Jorah explains. “Then she’ll roll over for a belly rub.” 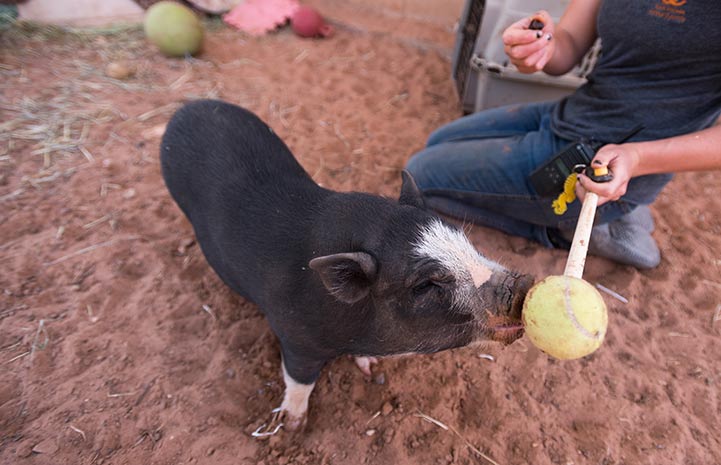 Since Paisley is starting to mature, she’ll be spayed soon. Jen Reid, manager of Marshall’s Piggy Paradise, explains that, as with other companion animals and barnyard pals, spaying and neutering potbellied pigs helps to prevent or alleviate behavioral issues by reducing their hormone levels, making them calmer and happier.

Paisley has only been at the Sanctuary for a few short months, but in that time she’s done a whole lot of learning and growing. Though she’ll grow up to be several times the size her breeders promised her first family, she’s now got a lot to look forward to. She’s found her confidence, and the adorable piglet has all the love and help she needs to grow up healthy and well-adjusted, which will help her find a great new home. 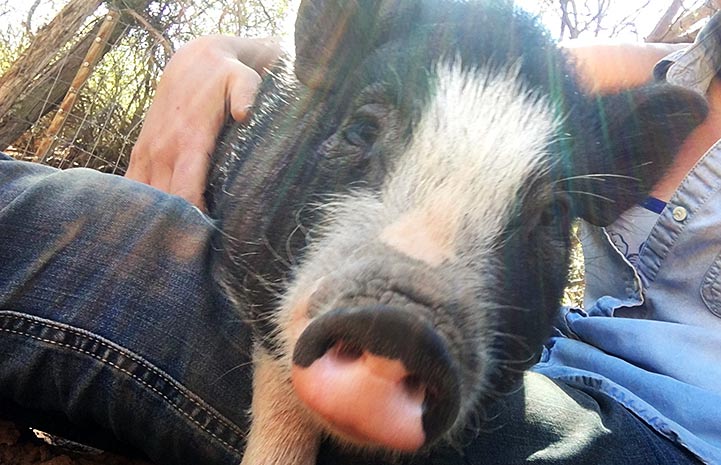