Image
Newborn kittens and their momma overcome the odds and a case of ringworm in northwest Arkansas.
By Lindsay Hutton

It was late January. Inside a cardboard box, along with her days-old kittens, was a cat with ocean blue eyes and a bright pink nose. Someone had carefully folded down the flaps of the box to prevent escape and had written on its side, “free moma cat.”

Someone in the neighborhood familiar with the momma cat found the box and promptly took her and the kittens to Springdale Animal Services. But since a shelter isn’t the best place for a nursing mom and kittens, they eventually were transferred to the care and safety of Best Friends in Northwest Arkansas and an amazing foster home.

The rescue of the sweet little feline family is an example of how different organizations come together to help animals and each other as part of Northwest Arkansas Partnership for Animal Welfare (NWA PAW).

Within days of being lost and adrift in a box on the streets, the family settled into Holly Brookhauser’s home. The spelling of “moma” led to the momma cat being named Moana, after the Disney movie. And her kittens were named after characters in the movie ― Hei Hei and Pua. Though safe, they were about to face yet another challenge in their young lives.

[Find out more about Best Friends work in Northwest Arkansas] 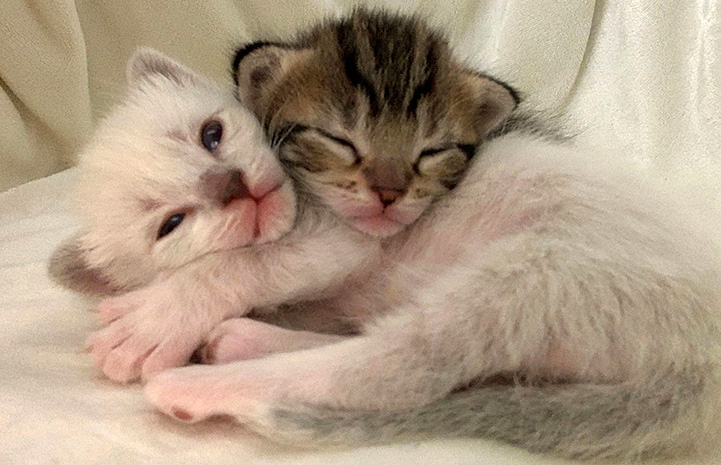 For the first few weeks, the cuteness was too much. Holly captured photos and video of the kittens snuggling, having kitten hiccups, scaring each other with sneezes and playing with toys. The only hiccup overall was when Holly noticed a scab on one of the kitten’s noses. Within three days that scab had turned into a bald spot. A trip to the vet confirmed that Moana and her kittens had ringworm.

A foster parent for kittens, cats and dogs for the past 10 years, Holly is no stranger to animal care challenges, having dealt with respiratory illness and more. But since this was her first case of ringworm, she got some help from Lauren Clingenpeel, cat lifesaving lead at the soon-to-be-open Best Friends Pet Resource Center in Arkansas, who made sure Holly had everything she needed.

Ringworm sounds scarier than it is. It’s not a worm at all, but a very common fungus found in our everyday environment. “It’s a reality we all deal with,” Lauren says. “The good news is that it’s not going to hurt you and it’s very treatable.” Treatment includes having a proactive attitude, patience and the willingness to do some extra laundry and cleaning.

Moana, Hei Hei and Pua were lucky to already be in foster care in a quiet environment where they could be isolated. And they were doubly lucky to have been placed in Holly’s care. 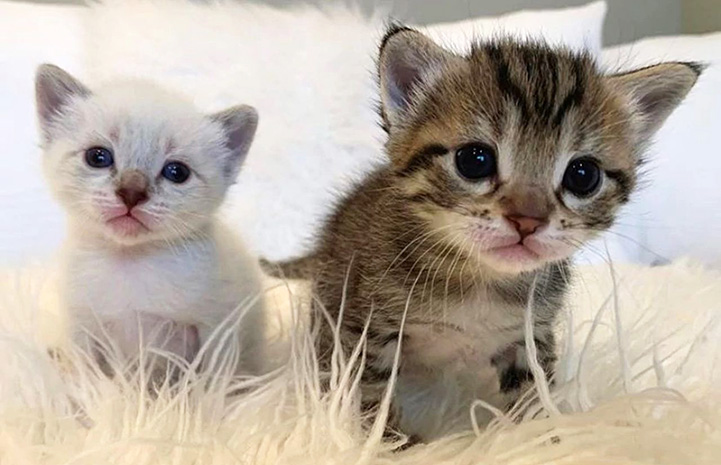 Ringworm treatment for cats and kittens

The treatment protocol included a regular shampoo regimen (once or twice a week and fast so that the kittens weren’t wet or cold for too long), plus applications of betadine on visible spots a few times a day.

Holly turned a spare bedroom into an isolation room for Moana’s family. The room was uncarpeted, which was ideal since ringworm lives on fabrics and carpets. (Super pro tip: Hot steam kills the fungus, so a steam mop is perfect for cleaning an uncarpeted room when dealing with ringworm.) She wrapped the guest bed mattress in painter’s plastic to seal it off, washed the cats’ bedding each day and got rid of any toys that couldn’t be disinfected.

Holly wore a different outfit each day, including gloves and shoes that she was careful to change before interacting with her other animals. She washed her hands often. As the kittens became more active, she bought cheap cardboard scratch toys or toys from garage sales and replaced them every two days. 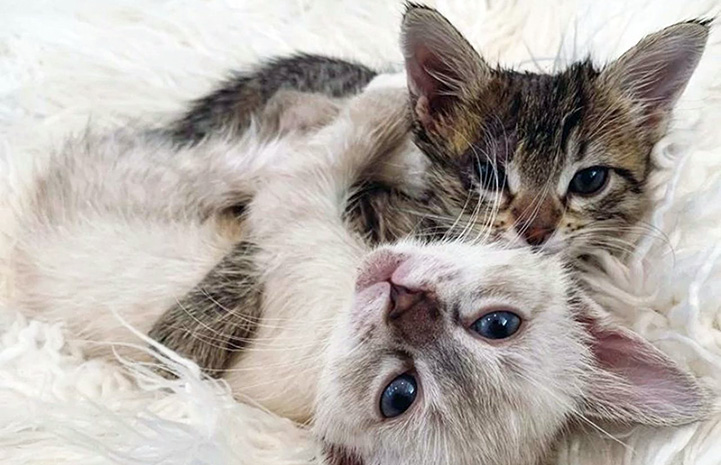 It took three or four weeks to get rid of the ringworm. Despite a bout of flu, Holly kept up the care regimen. And when she had to go away for a few days, her daughter took over. Meanwhile, she kept posting on her Paws of Oz Facebook page, harnessing the power of social media and giving followers regular doses of kitten shenanigans that included nap time and playtime. Adorable videos and pictures of momma Moana and her kittens garnered likes and generally stole the hearts of anyone scrolling through.

Not only did the videos, pictures and posts lure potential adopters, they helped clearly communicate the reality of dealing with ringworm. Sure, she couldn’t nuzzle the kittens like she wanted to, and there was all the cleaning. But clearly Moana, Hei Hei and Pua were thriving and healthy, as well as continuing to be completely charming.

In one of Holly’s posts, a picture caption of gorgeous Moana proclaims: Still beyond cute, even with ringworm. 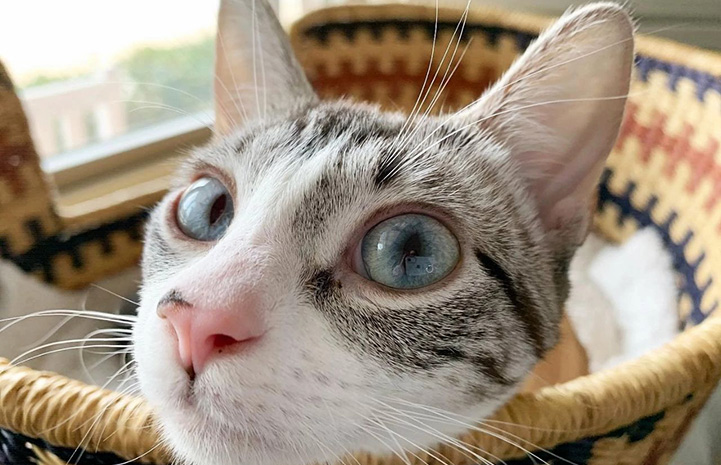 Adopted and off to new homes

Once they tested ringworm-free, Moana, Hei Hei and Pua were spayed and neutered and ready to go on to new homes. The kittens were adopted together. (Who could turn down twice the cuteness and the endless entertainment?) Their adopters renamed them Chandler and Joey, a great choice for these two friends who will spend their lives together in a loving home. 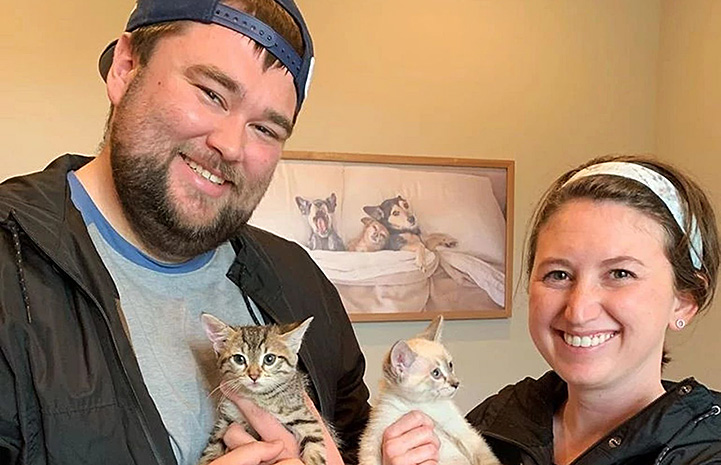 Since Moana was going to a home that already had two cats, she stayed with Holly a little longer to make sure the ringworm was gone. When she arrived at her new home, they renamed her Phoebe.

“Holly was a rock star foster and dealt with some of the most challenging ringworm I’ve seen with such grace and patience,” says Lauren. Thanks to Holly and organizations working with her, the three members of the cardboard box family have bright futures ahead of them. 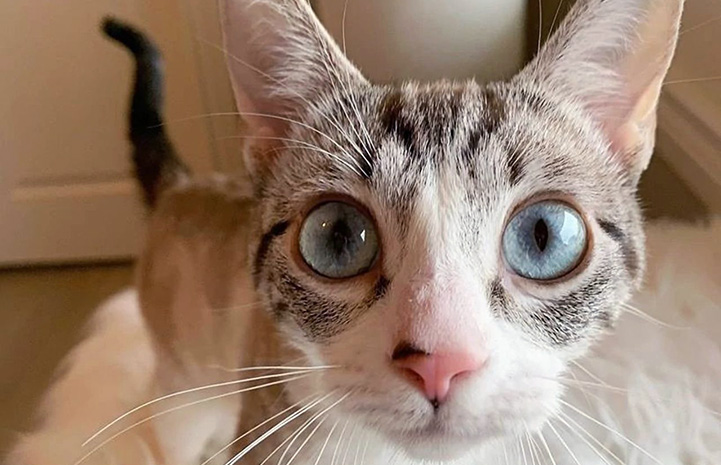 You can be a hero to a homeless pet

Right now it’s kitten season ― when thousands of kittens flood into shelters. They all need your help.