A most adorably naughty kitten

Image
Naughty kitten, who is FeLV-discordant and loves dogs, engages in all kinds of mischievous shenanigans in his foster home.
By Christelle L. Del Prete

Though his name is Gavin, the young buff-colored cat is sometimes called “Bat” because he hasn’t quite grown into his ears yet. But the biggest thing about him by far is his personality. Even though his kitten antics have gotten him into some tight spots, people can’t help but fall in love with Gavin when he reveals his larger-than-life personality. 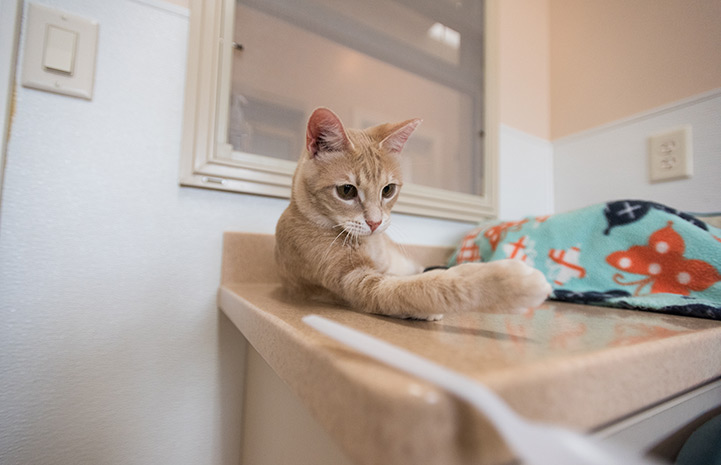 Gavin came to the Sanctuary from a local Best Friends community cat program. He’d been found as a two-month-old feral kitten with an injury that required minor surgery. Though the surgery went well, and Gavin quickly recovered, he received some life-changing news at the Best Friends Animal Clinic.

Gavin had tested as “discordant” for feline leukemia (FeLV) — positive on one test used to detect FeLV and negative on the other. Though it may never make him sick, the virus is in his body and other cats can get it from him. So Gavin can’t live with cats who don’t have FeLV. He also can’t live with cats who do have FeLV, because the extra exposure could increase Gavin’s chances of getting sick himself.

So Gavin went to a loving foster home with Best Friends adoption specialist Sherri Wilhoite, where he joined a household of dogs, instead of other cats. It was there that he began to let loose, and his spunky and endearing personality emerged.

First, Gavin revealed a particular fondness for dogs. “The first time he came face to face with my 50- to 60-pound dogs, he grabbed one in a hug,” Sherri says. “He played with them so confidently that it scared one of them. He loves dogs so much that he will ignore people in favor of a dog.”

Gavin also developed an inexplicable fetish for plastic-ware. He much prefers plastic utensils to cat toys. “I keep a little container of plastic utensils at my cat feeding area, and he proceeded to take each piece, carry it into the living room, lose it under a couch, then return for another,” Sherri says.

A kitten so naughty he’s nice

Although Gavin got up to some serious kitten shenanigans while he lived with Sherri, she couldn’t help but laugh at his antics. After settling into the room Sherri reserves for her foster cats (and knocking down every possible thing in it), he “conquered” the rest of the house by pulling two unforgettable stunts.

First, he somehow managed to pull the air register out of the floor and to run around in the air ducts for a while. Luckily, he came right to Sherri in the kitchen when she called to him, and she was able to rescue him without incident.

Then there was the night that Gavin knocked over a container of clumping kitty litter. That wouldn’t have been so bad if some of the litter hadn’t gone down the drain in the bathroom sink — or if Gavin hadn’t then turned on the faucet, causing Sherri to wake up to a flooded bathroom the next morning.

It may have been the volume of Gavin’s snoring that drowned out the sound of the overflowing water. “He snores louder than I do,” Sherri says with a laugh.

The plan was to wait a few weeks and repeat Gavin’s FeLV tests to see if his body was able to fight off the virus, which sometimes happens with kittens who test discordant. When his second set of tests came back the same, Gavin said goodbye to his canine friends at Sherri’s house, and moved up to Cat World to share a room with two other cats who are also FeLV-discordant. His chances of getting adopted would be better if he was in a place where lots of people could meet him.

At the Sanctuary, Gavin wasted no time in keeping both his feline roommates and his caregivers entertained. “He’s like the Energizer bunny,” says caregiver Dale Oster. “He had all the toys in the world here, but his favorite one was a plastic fork.” 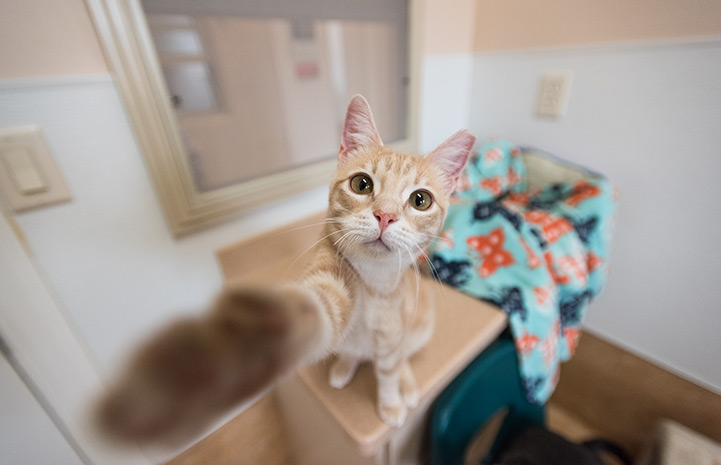 Packing up his plastic spoons

Recently, Gavin’s caregivers packed up a pile of plastic spoons for him to take along as he left Cat World. Gavin was bound for his forever home. His new family had come to the Sanctuary looking to adopt a cat with special needs — perhaps one with FeLV. When they heard about Gavin, they just had to meet him, and the rest is history.

​It’s not often that adopters are seeking a cat who will be the only feline in their home, but Gavin will get to do just that. Having only one cat is perfectly OK with his new family, especially because Gavin’s got enough personality for 10 cats.

And his foster mom, Sherri, will never forget him. “He was the best and the naughtiest foster kitten I've ever had,” Sherri says. “I’m just so happy for him.” 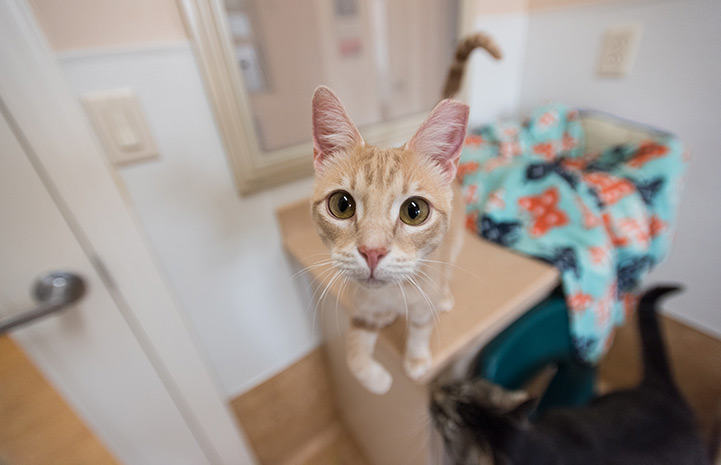