Moved to volunteer with hurricane pets

Image
Spotlight on people who have given their time, talents and passion to volunteer with hurricane pets in need in Houston after Hurricane Harvey.
By Kelli Harmon

On the very first day that the Pet Reunion Pavilion opened at NRG Arena in Houston, you couldn’t miss Earnest Jones. While everyone else wore T-shirts while scurrying around to clean cages and walk dogs, Earnest volunteered in his work clothes: black dress pants and shirt, and his Hilton Hotel vest. He was there at 8 a.m. sharp after a night shift because, he says, “I felt in my heart that I wanted to help.”

He’s in good company, because as many as 100 people a day have also felt moved to help animals displaced by Hurricane Harvey, and each person stepping up to help makes a difference. In fact, we couldn’t do it without them.

The Pet Reunion Pavilion is a partnership among Best Friends, Harris County Public Health Animal Shelter and Houston PetSet that has provided safety for more than 500 pets and given them the time to be reunited with their families. People have arrived every day from near and far, and from different walks of life. But all have one goal in mind: helping the animals.

‘A life can’t ever be replaced’

It’s not just Earnest’s snappy attire that makes him stand out. He’s a genuinely nice person who has a way of making everyone smile when he’s helping out at the pavilion. Need help carrying something? Earnest is there before you knew you needed it. He knows your name and remembers it. And he’s volunteering even though his home was flooded after the hurricane. “I felt sorry for people who lost all their things,” says Earnest. “I lost some of my things in the flood, too, but not as much as everybody else.”

That left him with a powerful need to help people who lost more than he did — by taking care of their lost pets. Earnest says, “Material things can be replaced, but a life can’t ever be replaced.” 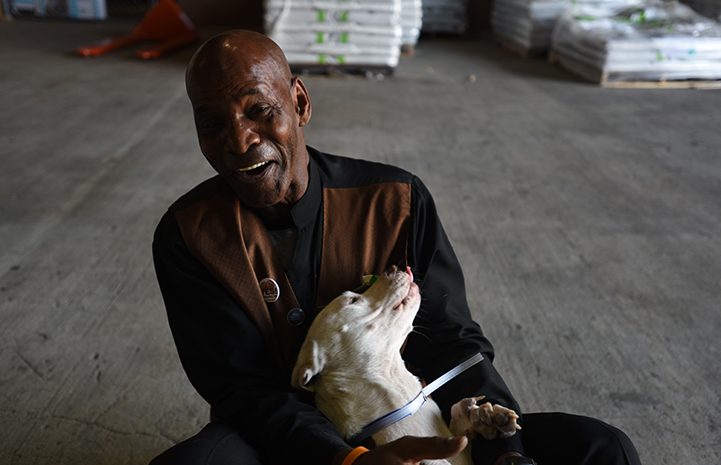 Bringing organizational skills from NASA to the cat room

Another local volunteer is Betsy Fleming, who is at the pavilion on her days off work from NASA. Even though she’s worked on the International Space Station, as she says it, “pretty much since it was born,” she’s been a cat person her entire life. “I was one of the lucky ones,” she says about Hurricane Harvey. “About 50,000 homes took on water in my neighborhood, but mine didn’t.” And when the pavilion opened, Betsy was there to help.

Her nearly 30-year job at NASA requires her to have “a whole lot of organizational skills,” she says. “And that’s necessary here, too.” When a truck arrived with 50 cats needing a cozy spot with a bed, litter box, food, water and toys, Betsy was there to help. It makes a difference to each kitty she feeds or cuddles, and it helps her feel better, too. “I’ve been anxious thinking about how many animals are displaced, and how many probably didn’t survive,” she says. “But you’ve got to try and find a way to help.” 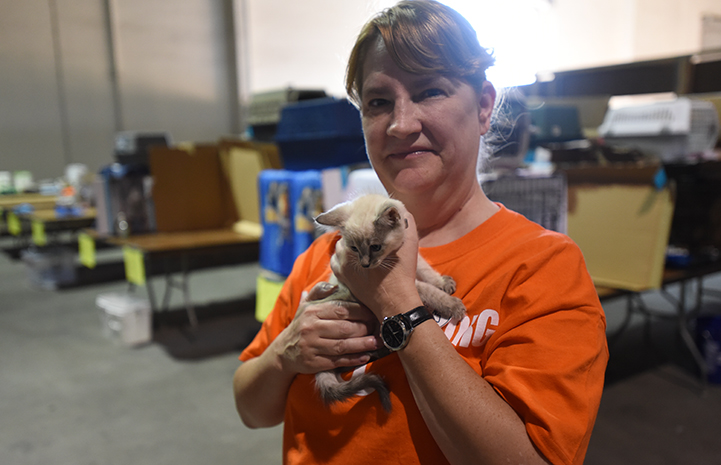 Empathy in spades from an ICU nurse

Back at home in Wilmington, Delaware, Gail Gallagher is a pediatric cardiac nurse in an intensive care unit. “I take care of little kids with bad hearts,” she says. But she also volunteers to walk dogs at her local shelter, and that’s why she came to Houston to help care for dogs after Hurricane Harvey. She’s used to long hours, staying calm when things are chaotic and managing many things at once. Plus, she’s really good with dogs.

Gail volunteered with animals after Hurricane Katrina 12 years ago. “It changes you,” she says. That’s why her first thought after Hurricane Harvey was to volunteer. Since she arrived in Houston, she feels good seeing that there’s a system for walking dogs (no small feat, considering around 350 of them need to be walked every day). There’s also a system for feeding them and a system of medical protocol. If there’s one thing a nurse appreciates, it’s protocol.

In addition to the happiness of seeing her canine charges well cared for, volunteering has its own rewards. “There’s always something to do here and there’s always someone who appreciates what you do,” Gail says. “I’ve never been thanked so many times in my life.” 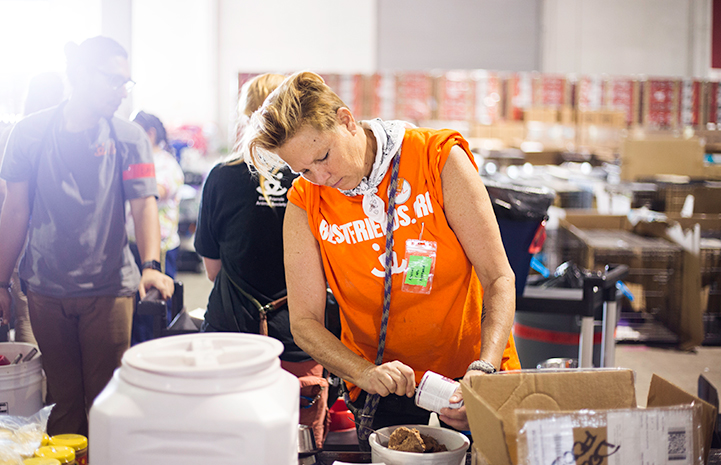 ‘There’s no time to stand around and be sad'

As soon as she found out that she could volunteer with animals after Hurricane Harvey, Laura Kephart went online and signed up for every volunteer shift available. Then she got in her truck and drove from Salida, Colorado, to the Houston area. “I would want someone to do this for me. I would be devastated if my pet were lost,” she says.

Laura owns a grocery back home, but her real passion is cats. And since she arrived in the Houston area, she’s spent every possible moment caring for felines displaced from their homes. “They’re nice cats — even the ones that are a little hissy,” she says. “I still love them.”

Though it’s a big job to care for more than 150 cats in a temporary shelter, she feels good knowing that every cat in the care of Best Friends has a clean cage, plenty of food, and vet care until they are reunited with their families or placed in new homes.

Like most people who have made the trip to Houston from across town or across the country, Laura was nervous about being completely overwhelmed. But once she arrived and got to work, it all felt better.

“Not that it isn’t tough,” Laura says, “but the cats make me so happy. And there’s so much work to do. There’s no time to stand around and be sad.”

How you can help pets displaced by Hurricane Harvey 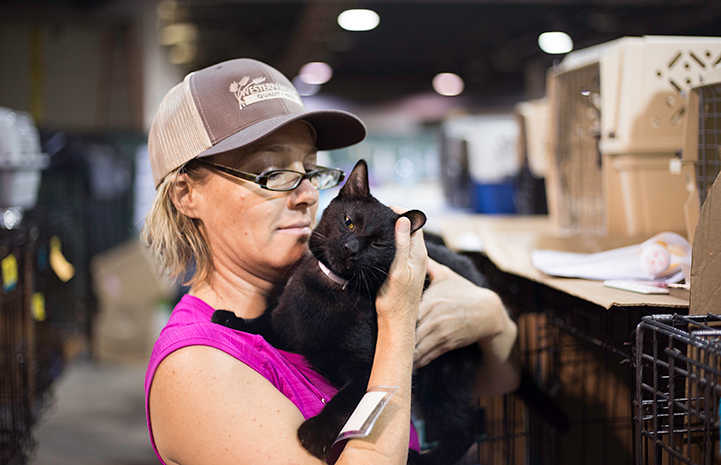