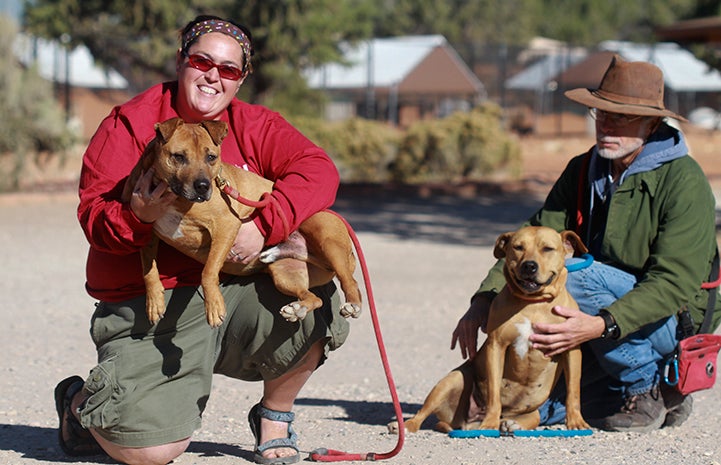 I first met the Vicktory dogs a few days after they arrived. At that time, we were giving 24-hour care and I was scheduled to do overnights, which was how I met most of the dogs. I spent several nights snuggling with Little Red, Curly and Bonita during my stint of staying overnight with them.

After the dogs had been here about six months, we started getting them settled into other areas of Dogtown, rather than housing them in one place. The area where I worked took over the care of Little Red, Handsome Dan, Meryl and Oliver.

That’s how I came to foster Oliver. He was one of the dogs who did not require a canine good citizen (CGC) certification to leave the Sanctuary, but it was evident that he could use a little extra help that a home environment could provide.

Oliver was my foster dog for 13 months before his forever home was found. After Oliver, I fostered Shadow, who lived with me for nine months before he was adopted. During this time, we continued to care for Little Red and Meryl in the area where I worked.

Both girls had run mates who came and went over time. Meryl was court-ordered to stay here at the Sanctuary and Little Red needed to pass CGC before she could be cleared for adoption. It was amazing to watch their transformations. 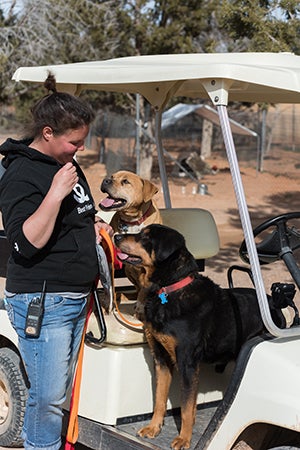 Meryl was a gregarious dog who had trouble trusting new people, and Little Red was so fearful, but she loved dogs! Finally, after two years, Little Red and I were able to cross her last hurdle and she passed the CGC test.

This meant that not only was she now officially available for adoption, but that she could go on sleepovers with staff. I started taking her home on weekends to get her ready for a forever home. Little Red already had an application with Susan Weidel, who had met her previously during a visit to Best Friends.

At about the same time, Meryl was introduced to the dog who would become her longtime boyfriend, Buddy Arnold. She and Buddy continue their romance to this day.

Over the years, my job has transitioned from caregiver to vet tech; so, for the last four years, I have been caring for the dogs in this capacity. Having already cultivated relationships with them early on, made my transition in this role easier, and I hope helped the Vicktory dogs feel a little more at ease during situations that required medical treatment.

The Vicktory dogs case was the first time someone stood up to say, “Hey these dogs aren’t just collateral damage from an abuse case, they are individual animals that can be helped and should be helped.”

What the Vicktory dogs symbolize for me is perseverance. They endured a horrible start in life that would cause any animal to shut down and give up. Yet at every turn, they surprised me with their joy to learn and ease with which they gave affection.

The fact that these dogs could learn to trust and heal, to this day still astounds me. They also taught me patience. So many of them were so shut down and afraid to even walk that we called them the “pancake dogs,” because they’d flatten themselves to the ground. They were afraid of everything, yet somehow, bit by bit, they gave us their trust and blossomed. They also taught me acceptance — acceptance that no matter where a dog is in his or her journey of recovery, that the dog they are today is exactly the dog they should be. We so often expect epic transitions to happen with animals when the tiniest of accomplishment is enough.

One of my fondest memories will always be my time with Little Red at the dog park. She was so very playful. Her run mate at the time was a dog named Beefcake. Beefcake was a large dog who was also rescued after a dogfighting bust. He had a much more easygoing personality, whereas at the dog park, Little Red could be quite the spaz.

My co-workers and I would narrate her interactions with Beefcake as if they were starring in a nature documentary. “Here sits the calm water buffalo (Beefcake) grazing in the pond … whilst the agile lioness prowls her prey.” Little would stalk Beefcake and then come tearing down the hill of the dog park and pounce on him. They would do this for hours if we would let them. She was so playful and happy at the park. 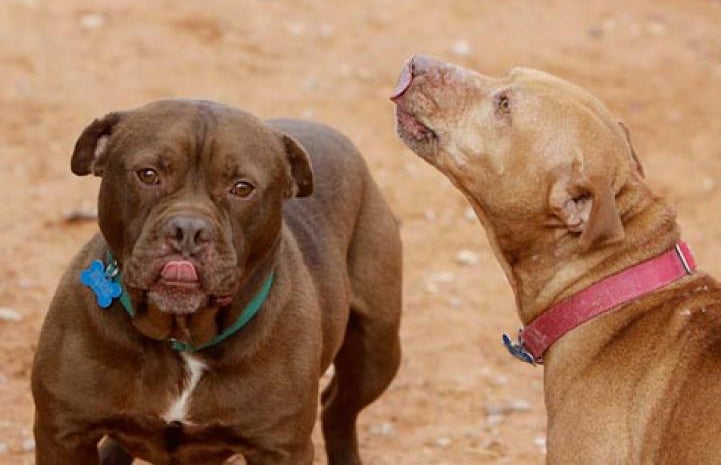 What lives on after all these years is the idea to treat all living things individually — that all animals deserve a chance regardless of their circumstance or breed.

I think that the Vicktory dogs have touched so many people because everyone can identify with them. We all have histories and pasts that may have been rough and situations that we may have had to overcome. It’s this triumph in the face of adversity that people are drawn to. They see themselves in the stories of these dogs and it gives them hope.