Where does a National Hockey League star go for his fifth wedding anniversary? If you're David Backes, captain of the St. Louis Blues, you come to Best Friends. David and his wife, Kelly, wanted to celebrate their personal milestone with a charitable trip. They were drawn to Best Friends because of their interest in animal advocacy and their desire to see a major, successful animal sanctuary at work. 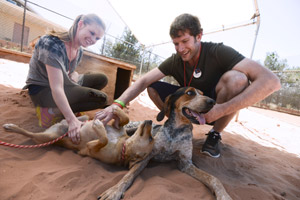 During the hockey season, David and Kelly live in St. Louis; in the off-season, they're in Minnesota, where they grew up together. Kelly jokes that they travel back and forth between the states with the "Backes traveling zoo": a Rottweiler, two pit bull terriers, and a beagle named Bebe, who was a rescue from a puppy mill. Animals have always been part of the Backes' lives. Kelly grew up surrounded by them and has always been passionate about helping them. And David's childhood pet, a poodle named Jazz, had a lasting impact and lived to be 17.

The couple adopted two cats together when they were in their early 20s, and thus began their foray into the world of rescue and advocacy. David explains that they saw a need in St. Louis and decided to get involved - particularly with Five Acres Animal Shelter and Stray Rescue of St. Louis.

And the ambitious pair wants to expand their impact far beyond these two shelters. As a professional athlete, David is uniquely positioned to do just that. The couple plans to form their own charitable organization with the goal of uniting professional athletes in support of animals. Ultimately, David seeks to change minds and teach people that animals aren't disposable. 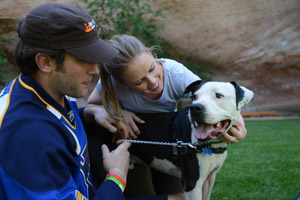 The trip to Best Friends turned out to be not only a pleasurable visit, but also a learning experience and a source of inspiration. David and Kelly were particularly interested in the volunteer program, and the ways in which Best Friends encourages visitors and volunteers to get more involved in their own communities, as well as in our mission. The couple also said that they have been inspired to dream big after learning about the humble beginnings of Best Friends and how everybody worked together to make it what it is today.

Although their visit was short, David and Kelly still had time for fun, games and … chores. One lucky Dogtown resident, an adoptable pit bull terrier named Vince, accompanied them on a sleepover and a long hike at Coral Pink Sand Dunes State Park. And the hockey star and his wife were both genuinely looking forward to an afternoon of volunteering in Dogtown. Laughing, David said that he was fully prepared to use a pooper scooper - a tool, thanks to their four dogs, with which he has plenty of practice. 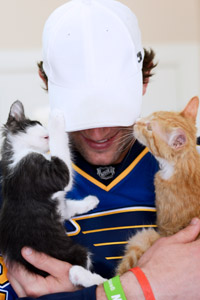 First, however, there was a fortuitous stop at Cat Headquarters. On his way through the parking lot to the building, David noticed a car with a St. Louis Blues sticker on it. A quick inquiry revealed that it belonged to a mother and her son from St. Louis who were not only volunteering at Best Friends for several days, but also in the process of adopting Millie, one of the cats featured in Best Friends' Guardian Angel program.

So the gracious star decided to surprise these fans and thank them for adopting. As the mother and son were filling out paperwork, he walked into the adoptions office, wearing his jersey, and introduced himself. At first, they were too shocked to respond. But, after realizing that David was the real deal, and not only a champion on the ice but also a champion for the animals, they posed for some photos with him.

Take a trip to Southern Utah and volunteer at Best Friends Animal Sanctuary.