Image
Senior mastiff who had a difficult past as a breeder dog with little human contact or care is rescued. Best Friends helps network to find him a home.
By Denise LeBeau 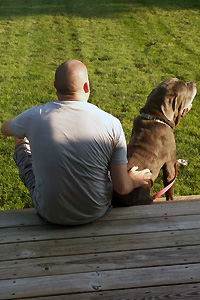 To look at Beast, sitting with his new dad on the edge of a deck in a grassy yard, you wouldn’t guess that the mastiff with the big smile came from such a bleak past. For the first eight years of his life he’d been either in a basement or tied up outdoors, away from human contact and love. Because he’d been used for breeding, he also wasn’t neutered. All these facts added up to trouble when his owners surrendered him to a shelter in Ohio, because by that time, Beast was a senior, 100-pound, unsocialized, unneutered dog who tended to guard things. Even young, friendly, healthy dogs can be killed in shelters, so the outlook for Beast wasn’t good at the busy shelter responsible for him. But a local rescue group and Best Friends saw hope in Beast, and that made all the difference in the world for him.

Turn for the better for senior mastiff

An organization called Forget Me Not Animal Rescue learned about Beast and secured a foster home for him with volunteer Dori Parker. They’d give him a chance, but the road to success would be a long one.

When he arrived at Dori’s home, it took a lot of patience and treats just to convince Beast to get out of the truck. Undeterred by his reluctance to rush into his new life, Dori spent the first week patiently working with him on a 10-foot lead. “We reinforced him coming to us by giving him treats,” says Dori. “By day 10, he felt safe enough to let us put a collar on him.”

The group also set up Beast with a trainer who helped him overcome his tendency to guard food and stop snapping at strangers who reached out to pet him. Beast’s true gentle nature began to show through when, after just a few weeks, he learned he didn’t have to scare away new people by threatening to bite them. In fact, new people usually had yummy treats for him. He also lived harmoniously with his foster mom Dori’s menagerie of dogs. Because Beast was doing so much better, the rescue group began looking for his next home. But that’s when it again began to look like Beast might lose out.

The group contacted everyone possible to find Beast a home, but with no luck. They’d taken quite a risk when they picked up Beast from the shelter, and even though he’d come so far, they started to wonder if they’d ever find him a home. They needed more help. Luckily, because Forget Me Not Animal Rescue is part of the Best Friends No More Homeless Pets Network, that help was at hand.

The No More Homeless Pets Network is a group of rescue organizations and municipal shelters across the country working with Best Friends to end the killing of animals in our nation’s shelters. And as a Network partner, the group is eligible for several types of support from Best Friends. On a lark, Dori contacted Network specialist Marla Browne. “When Marla responded, it was the first glimpse of hope that Beast could find a forever home,” says Dori. 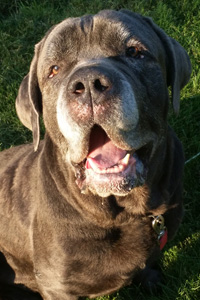 “We received more support than we needed,” says Dori. In fact, there were so many inquiries from people who wanted to help Beast, she had to turn them away — but not before suggesting a way to help pets like him in the future. Dori says, “I asked folks to donate to Best Friends in Beast’s name.”

One of the responses was from a wonderful couple in Michigan willing to do whatever it takes to keep Beast happy and healthy for the rest of his life. Beast was finally going home.

“Beast’s adoption exemplifies how the Best Friends Network and our supporters are dedicated to saving each and every special life,” says Marla. “Forget Me Not Animal Rescue couldn’t turn their back on Beast, and neither could we.”

Sign up to receive member messages from Best Friends and help pets in need near you.