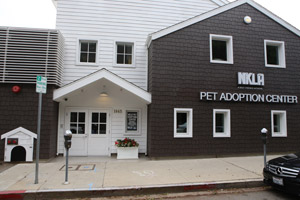 "It's amazing," says Meghann Shrum of Catalina Island. "I've never seen anything like it. Everyone is so nice and friendly when you walk in; it's really refreshing."

Cheers went up when Meghann chose Doc Holiday, a scrappy, seven-year-old black-and-white bull terrier, to add to her pack. It was the first adoption for the center, which partners with participating NKLA Coalition rescue groups, such as Downtown Dog Rescue, Labradors and Friends Dog Rescue Group, Kitty Bungalow Charm School for Wayward Cats, Wags and Walks, FixNation, and Angel City Pit Bulls, to showcase their available pets, all of which are rescued from one of the six L.A. city shelters or the streets of Los Angeles. 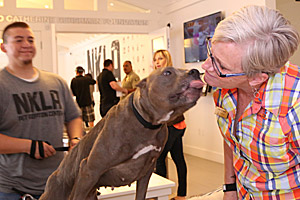 "The incredible animals at the NKLA Pet Adoption Center are going to prove once and for all that shelter pets are the best option when it comes to adding a four-legged member to your family," says Marc Peralta, executive director of Best Friends Animal Society-Los Angeles. "Plus, every time a pet is adopted from our center, it's like saving two, because we immediately pull another dog or cat from the shelter."

Tracy Lopez, alumni coordinator for Angel City Pit Bulls, stopped by to enjoy the festivities and check on the organization's two adorable pit bull puppies at the adoption center. "It's been great to be an NKLA partner. It's really helped get the word out about adopting and getting L.A. to become no-kill," she says.

With a goal of making Los Angeles a no-kill city by 2017, the NKLA initiative is already making great strides. The adoption, transport, and low-cost spay/neuter programs carried out by Best Friends and its NKLA Coalition partners have played a major role in decreasing death rates at city shelters by 25 percent from June 2012 to June 2013. 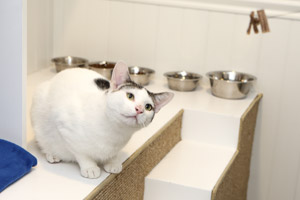 Fostering and volunteering are also making a huge impact. For example, the NKLA kitten nursery at the Best Friends Pet Adoption Center in Mission Hills has saved close to 1,000 neonatal kittens from city shelters since launching in February 2013, thanks to dedicated cat lovers who bottle-feed and provide 24/7 care on site or at their homes. "Neonatal kittens comprise a large number of the animals that are killed at L.A. city shelters, so saving as many of these babies as we can is essential for us to meet our no-kill goals for Los Angeles," Marc says.

Tracey Lunac of Westchester, a Best Friends volunteer, came to the adoption center with her sons, Evan, 14, and Caiden, seven, to check on a female kitty named Obsession, a neonatal nursery alumni whom they had fostered just before the grand opening. "We hope she finds a good home," Tracey says.

Evan thinks Obsession has a mighty good chance. "This center has the whole package for anyone looking to adopt," he says.

As for Doc Holiday, he is getting used to his canine siblings, a Tibetan terrier and a Yorkie, as well as to life on Catalina Island, according to Meghann.

"He loves it," she says. "We hike a lot out in the hills. Doc's not quite sure about the ocean yet, but he's getting used to it. We'd definitely recommend adopting a pet from NKLA to anyone."