New start for a young hawk

Image
After lead poisoning and West Nile virus tests are negative, it is determined young Ferruginous hawk is suffering from ‘failure to thrive.'
By Sharon St. Joan

On a November day, a young ferruginous hawk landed at the local airport, a few miles from the Sanctuary. No, he wasn’t returning from a trip. In fact, he was having trouble flying.

A gentleman there immediately noticed that the bird couldn’t seem to fly. Arrangements were made for the young raptor to receive help, which he would need to survive. Birds who can’t fly face a number of dangers.

When the hawk arrived at Wild Friends, Dr. Nova Reeves, Best Friends veterinarian, and Todd Moore, wildlife rehabilitator, didn’t detect any injuries, other than a loose wrist joint. They wrapped it for support, and left the bird to rest for the night.

A clean bill of health for Ferruginous hawk

Carmen Smith, licensed wildlife rehabilitator and Wild Friends manager, saw him the next day. She, too, couldn’t find any other apparent injuries; however, the young bird was just “not as perky as he should be,” she recalls. He may have flown into something and sprained his wrist, or he might have suffered some head trauma.

At first, their main concerns were that he might either have West Nile virus or lead poisoning. West Nile is still an issue for birds in Arizona (the Arizona border is just a few miles from the Sanctuary). Lead bullets, still used by local hunters, could cause lead poisoning in a young raptor scavenging for a bite to eat.

Fortunately, tests for West Nile and lead poisoning came back negative. That was good news. It seemed that the young bird was suffering from “failure to thrive,” an uncommon condition. 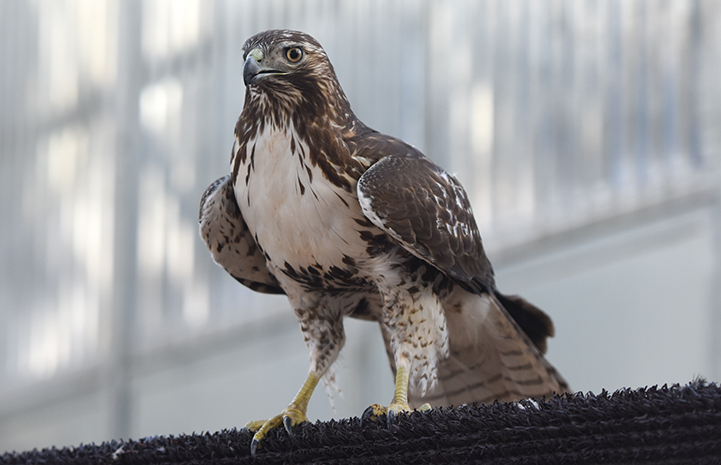 Failure to thrive in birds

Fledglings just out of the nest continue to be fed by their parents for many weeks, and this is the time that they are learning the ropes of how to survive. But the day does come when a young fledgling must stand on his own feet and no longer depend on his mom and dad.

Some fledglings just don’t get through this stage well, and still need extra help to survive. A wildlife rehabilitator can help them over this rough patch.

Carmen says that a failure-to-thrive bird, like many of us, just needs some extra help with life. “He’ll go through a retraining process to shore up his skills so he can thrive. He won’t be released until he has proven that he has adequate skills.”

The failure-to-thrive youngsters tend to arrive in the fall because they’re not getting enough to eat. Malnutrition and dehydration become problematic, and then it turns cold. “It all piles up,” says Carmen.

Three weeks ago the young hawk, feeling a whole lot better and coping better with life, graduated to Wild Friends’ large flight aviary. There he met a young red-tailed hawk, also a failure-to-thrive bird, who had been pulled out of Lake Powell. Somehow, the hawk had gotten himself into the lake, couldn’t get out, and a kind rescuer rescued him from the water.

The two hawks didn’t want to say hello at first and refused to share a perch, but now they’ve become fast friends. When they’re released, they’ll go their separate ways, but for now, it’s good to have a friend.

They’ll be released as soon as wildlife rehabilitators are sure that they're ready to fend for themselves.

Having been given a second chance in life, both young hawks are doing great and looking forward to living many new adventures free in the wild. 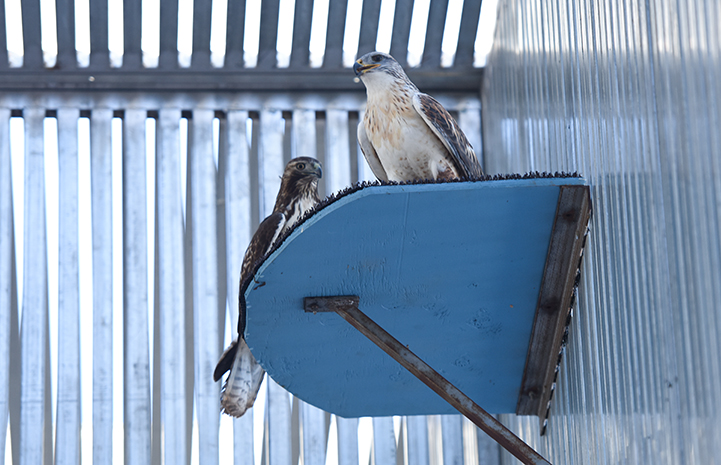