It was an unseasonably warm day as nearly 1,600 people and their dogs celebrated the fifth annual Strut Your Mutt in New York City on September 27. Event participants raised more than $267,000 leading up to and including the momentous day, all to help homeless animals. The New York event was one of 12 Strut Your Mutt fundraising walks held in cities across the country this year. While many groups raise their entire annual operating budget at Strut Your Mutt, it’s the festive atmosphere and sense of camaraderie that’s the hallmark of this Best Friends event. And it’s tailored for the real stars of the day — the canine participants.

Fun in the sun at New York's Strut Your Mutt 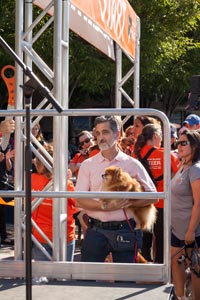 As the temperatures soared at Hudson River Park’s Pier 84, so did everyone’s spirit. With numerous water bowls positioned around the blacktop and sprinklers cooling the air, it was clear that the health and safety of the dogs came first. Second came the fun. With an agility course, the Downward Dog Yoga Tent, the Dog Week photo booth and more, it was obvious who the guests of honor were.

Bill Berloni, trainer to Broadway’s furriest celebrities, was thrilled to be there and lend support to animals in need. By his side was his Pomeranian, Trixie, looking like the leading lady she is. Bill rescued Trixie from a municipal shelter, and they were at the event to help build further awareness about the wonderful dogs available for adoption. “I’ve trained more than 400 dogs over the years, all from shelters,” says Bill. “When people ask me where I got Trixie, I tell them they could have adopted her the day before I did. Shelters are full of beautiful and sweet dogs.”

The New York event hosted more than 30 local Best Friends No More Homeless Pets Network partners. The No More Homeless Pets Network is a Best Friends program that works with rescue organizations and municipal shelters across the country to end the killing of dogs and cats in our nation’s shelters. The 30 groups included two of the area’s largest municipal shelters: New York City Animal Care and Control and the Town of Hempstead Animal Shelter.

No Strut Your Mutt event is complete without the awards, which many strutters take just as seriously as raising much-needed funds. The “Best team spirit” award went to the PupScouts, who raised more than $1,350 for homeless pets and brought some extra flair to the day. Theresa Wong was resplendent in knee socks and a cute modified Brownie uniform. She credits her poodle, Bee Bee, as inspiration for the ensemble. 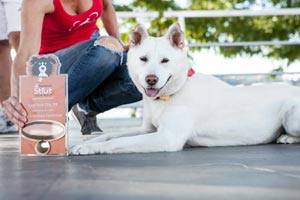 On the fundraising front, few could compete with the determination of Treasured k9s, the day’s top fundraiser, which raised more than $25,000 to help save more Korean Jindo dogs. “This was going to be our year,” says Kristen Edmons, the founder. “We’ve come in second twice, and our supporters know this is the event that carries us financially for the year.” Kristen was right. This year was their year to win the top fundraising prize.

The top individual fundraisers, Renee and Dale Schlather, raised more than $12,200. They also have a soft spot for Jindos in that their fundraising efforts were in memory of their beloved Jindo, Candy. “This is a really easy way to raise money and we want to do all we can to help Treasured k9s,” says Renee. “They take in the most at-risk dogs and spare no expense in getting them rehabilitated.”

From the funds raised to the fun enjoyed by everyone, this year’s Strut Your Mutt was another rousing success for dogs in need and the organizations and individuals dedicated to saving them.