Image
New Zealand rabbit (bunny with white fur and red eyes) is rescued after being hit by a car and comes the the Sanctuary for help.
By Christelle L. Del Prete 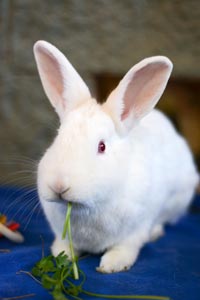 Not too many bunnies can boast that they went to the Best Friends National Conference, but sweet, friendly Norah can. She was hand-picked to represent all her rabbit friends at the Bunny House and to meet and greet conference-goers. That’s because Norah not only has a great personality, she’s also a wonderful ambassador.

Find out about the animal conference

Norah is a New Zealand rabbit — all white with red eyes. While pets with black fur often must wait longer than lighter-colored pets for adoption, that isn’t always the case with rabbits. In fact, Bunny House manager Jason Dickman says rabbits like Norah are adopted less frequently than their black counterparts because of their red eye color. But he’s hoping Norah can help people see past that.

Norah had a rough start in life, and as a result, it took her a little while to come out of her shell — or, rather, her box. She had been found in a local community, limping around in the road after being hit by a car. Domestic bunnies tend not to fare very well in the great outdoors. And, being injured, Norah’s chances of survival on her own were slim. So a rescue effort was launched, and, eventually, she was brought to the Sanctuary.

Although Norah was frightened and sore after her ordeal, she was a very lucky bunny. She didn't have any broken bones or any other serious injuries. After a few days of recuperation in the Best Friends Animal Clinic, she was able to go live at the Bunny House. But when Norah first got there, she was extremely shy and would not leave her hidey-house box until all caregivers had left the room.

Sometimes it just takes new bunnies a little while to settle in and figure out that the Bunny House is a great place to be. No one knew how long the young bunny had been outside trying to fend for herself, but now she was free to munch on big leafy greens in complete safety and peace. And, once she finished her quarantine and got a room of her own, her fun, friendly personality really came out.

Warming up to people 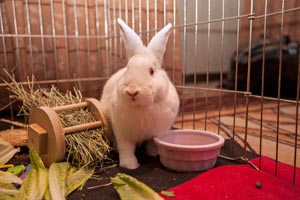 Now, instead of waiting until everyone’s left the room before coming out of her box, she jumps right up on top of it to greet people. And she loves to sit in volunteers’ laps. She’s so social that caregivers started taking her to events. Her first one was the How to Start and Run an Animal Sanctuary workshop, held right here at Best Friends.

With her winning personality, it wasn’t long before Norah was on her way to Las Vegas for the big conference event. When she arrived in the room where other Sanctuary animals were also waiting to meet the public, she spent a few uncertain moments hiding in her box. Then she came out to greet the crowds and snuggle happily in people’s arms.

Consider a donation gift to help animals like Norah