Not an unsocialized cat after all

Image
Unsocialized cat, who seemed to be feral and was put in a working cat program, turns out to be friendly after all, and is adopted into a loving home.
By Nicole Hamilton

Life is good for Chance the cat these days. He lives in a cozy home with an adopter who thinks the world of him (and another cat who is learning to think the world of him). But there was a time, not too long ago, when this kind of life wasn’t in the cards for Chance.

Before his life got better, it was turned upside down when he was brought to a Los Angeles city shelter after being abandoned at a veterinarian’s office. When he arrived at the shelter, he was so unhappy that he couldn’t join the other adoptable cats.

Time was of the essence for Chance because, if he wasn’t suitable for adoption, there was simply not enough space for him at the shelter. And space in the working cat program, created to save more lives in L.A. city shelters (where all adoption center animals are from) was limited, too. But luck was on Chance’s side, because on the very day that his fate would be decided, a spot opened in the working cat program. Chance’s life was spared. 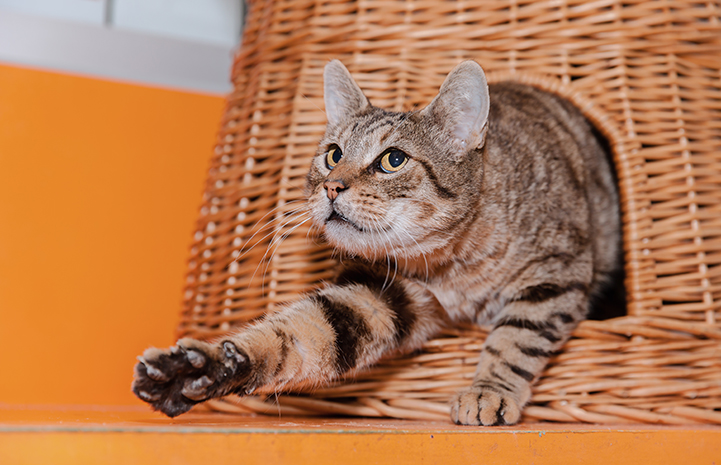 A tiny meow leads to a big opportunity

Samantha Bell DiGenova, a Best Friends employee, met Chance soon after he arrived during one of her routine stops in the working cat area. The cat behavior and enrichment lead at the adoption center, Samantha checks in with cats when they arrive in the working cat area to see if any of them want to be her friend.

Each enclosure there is covered because many of the cats are unsocialized and don’t want to see or be seen by people. They usually relax (safe behind cover) and the room is quiet; but on this visit, Samantha heard a tiny meow coming from behind a blanket. When she lifted the blanket, she was surprised to see a huge brown tabby cat. It was Chance.

“I opened his cage door and he started rubbing on it and continued talking to me,” says Samantha. “There wasn't a doubt in my mind that he was a friendly cat. But I was still cautious, and started petting him with a back scratcher, just to be safe. He leaned in to the petting, started purring and flopped on his side. I could tell it was safe to pet him with my hands, so I did for a while, and he loved every minute of it.”

It was clear that Chance didn’t need the working cat program, unless working his way into an adopter’s heart counted. This big guy belonged in a home with a family, and so he was moved into a room with other friendly cats at the center, where he waited for yet another opportunity to live up to his name. 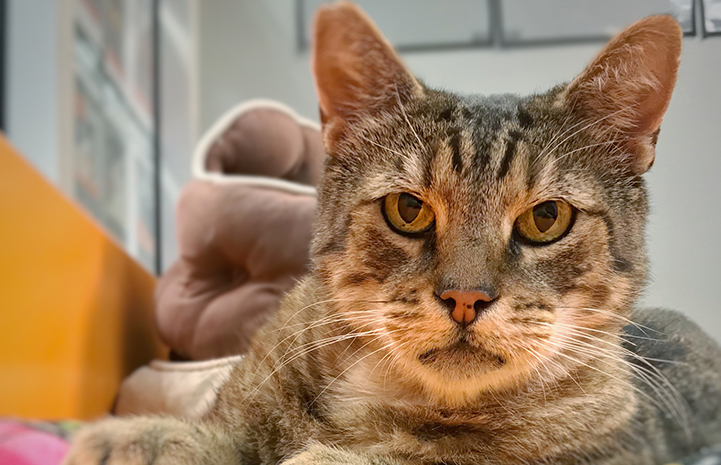 A once-unsocialized cat gets a home

Kathy’s home was feeling a little empty without Taz, a cat named after the Tasmanian Devil cartoon character, whose personality could fill a room. Since he passed away last year, Kathy felt his absence, and she was pretty sure that Oliver, her other cat, missed him, too.

On the advice of her friend, she decided to visit the adoption center, because she was tired of leaving Oliver alone at home when she went to work. She wanted a cat who could keep him company.

When she met Chance, he was curled up and sleeping in a room with other cats. She loved his laid-back personality, which she noticed as soon as he woke up from his nap. And when he stood up for more petting, she saw his beautiful his brown-and-black coat and fell in love.

That day, Chance received something that wasn’t part of the original plan: his own home, complete with an adopter who will never abandon him. 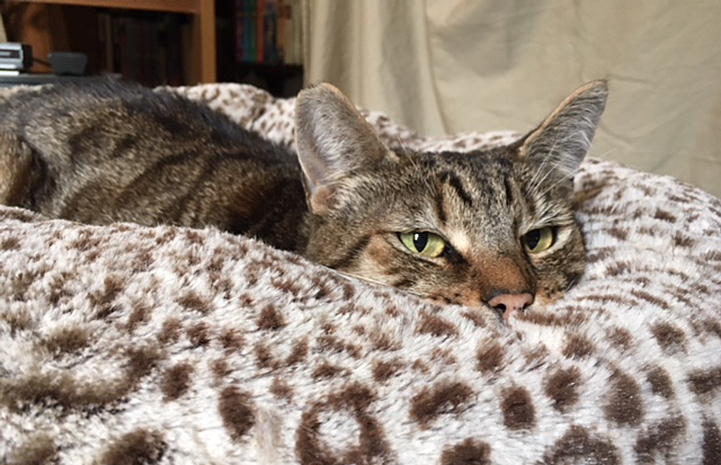 The perfect name for an abandoned cat

Whenever Kathy sees Chance asleep in the sunlight or snuggling up with her on the couch, she can’t believe he’s the same cat who was once considered unadoptable. And this just makes her love him more.

Today, Chance’s biggest worries are whether Oliver will share the cat bed with him and what time Kathy will give him his daily treat. He’s getting just what his name implies: a second chance.

Give more cats a chance. Donate to Best Friends. 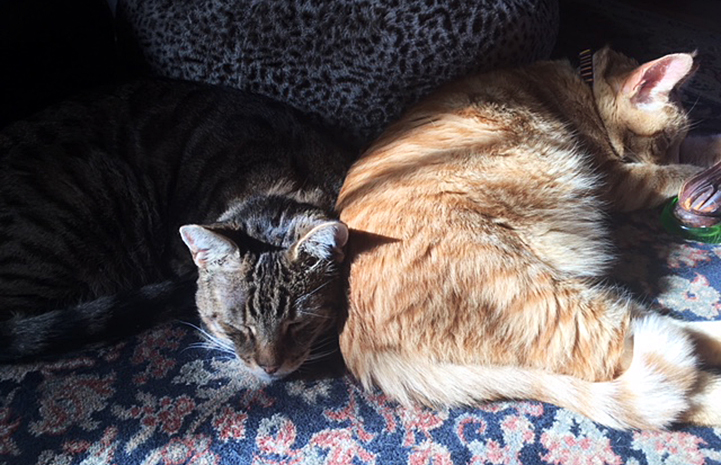