Old dog is a master at learning new tricks

Forget what you’ve heard about old dogs and new tricks. Levi may be nearly 11 years old, but ask anyone who knows him and they’ll tell you he’s one of the quickest learners around. He simply loves being able to put his brain to work and jumps at any opportunity to do so.

His love of learning goes way back to when he was part of a prison training program at the shelter he was in before he came to Best Friends. Inmates spent time teaching the dogs from the shelter basic manners and cues, and Levi quickly became the star pupil. With his skills and smarts, he had no trouble finding a home, but without a job to keep his mind busy, he started acting out. And when the family was no longer able to handle him, he eventually ended up at Best Friends Animal Sanctuary.

Now, caregivers try to turn everything into a job for him to keep him happy and engaged, because a bored Levi is a mischievous Levi.

“The thing I always tell everybody whenever I introduce them to Levi is that he is smarter than me,” says Madi Habel, Dogtown supervisor at Best Friends. “He is the smartest dog that I have ever met.”

With a dog as smart as Levi, it’s important to keep him engaged. When he doesn’t have an outlet for his energy, he gets frustrated and starts jumping up on people, which can be a little overwhelming, because he’s a big dog. Other times, he might play pranks on them instead.

“He knows what he’s doing,” Madi says. “He’ll walk with volunteers and purposely get them lost. And then they wander to a staff member for directions. He’s done that too many times for it to be the person getting lost.”

Levi’s repertoire of cues includes all the basics (sit, down, shake, stay) and the list keeps growing. He’s an excellent dog for showing people how to teach new tricks, because he takes to it quickly, so he often becomes the go-to dog for caregivers to hone their training.

He’s passed C.L.A.S.S. (the canine life and social skills class) twice, with different caregivers each time. “By the end of the course, you had to learn a new trick,” explains McKenzie. During one of those classes, Levi learned to pack himself into a suitcase with the “pack up” cue, a trick which earned him first prize in competition at the Sanctuary.

The clever pooch has learned to skateboard, too, though he’s a bit too big to fit on the board entirely, so he has to settle for scooting around with just his front paws on it.

Agility, nose work: Levi does it all. He’s even dipped his paws into search and rescue.

“Usually when the dog finds you,” Madi says, “you just give them a cookie. But he was so amped about it that we had to teach him to lie down when he found us. He’d be so happy he’d pounce, lie down and then run back. He wouldn’t even wait for a cookie, he was so excited to do it. He was really good at it, too.”

Honestly, if Levi had thumbs, he could probably be the one writing this story. 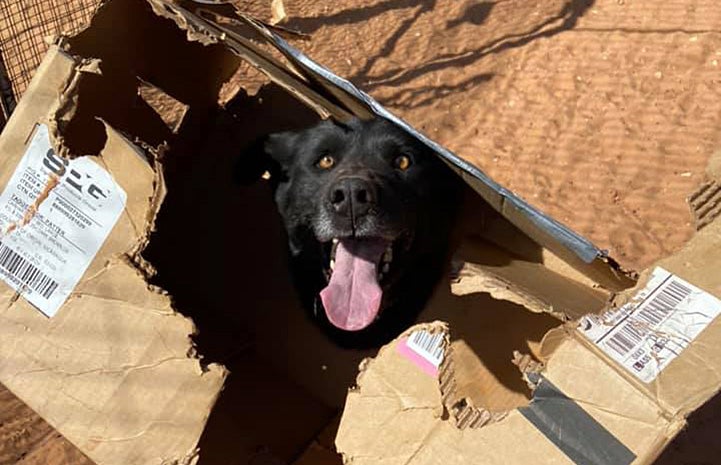 Having structure and opportunities for mental exercise also helps Levi relax. “A lot of dogs need systems,” explains Madi, “but he loves having a system. It’s done wonders for him mentally. You can see he can actually calm down now. There would be times when he would just be frantic and jumping for something to do. So, when you come into his area and can say ‘Hey, we’re doing this thing. You’re going to go to your place. You’re going to wait. We’re going to do very structured things,’ then he can rest.”

His age has barely slowed him down and he still has more energy than many dogs much, much younger than him. Levi enjoys going out on hikes and swimming at the dog park, and while he can’t have toys unsupervised (because he tries to eat bits and pieces of them), he loves gnawing on a good Kong toy. 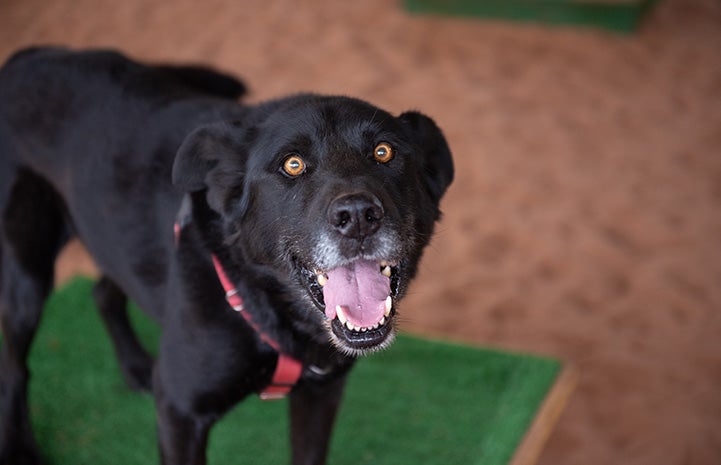 [Senior dog coasts into his golden years with a smile] 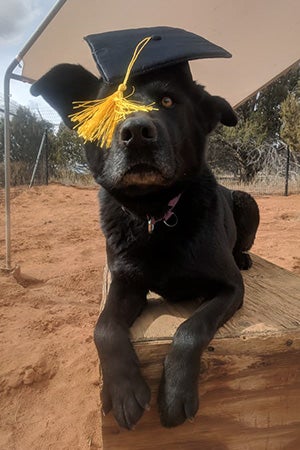 On the weekends, Levi has a volunteer friend who takes him out for long trips into the nearby town for a change of scenery. “Susan’s a certified trainer,” Madi says, “and he’s her favorite dog ever. They go on adventures, and they do all kinds of almost service-dog-type training: getting him to be super calm and relaxed on leash in public, all kinds of things giving him experience outside of the Sanctuary.”

It’s in making dog friends where Levi struggles. He’s not really interested in having a canine companion, and that makes it harder to place him in a home. Most people who love dogs and have the skills to keep a dog like Levi happy, already have one. But one day when Levi meets his match in a person without another pup who appreciates his brilliance, he’ll be a friend for life.

Help dogs near you

Learning tricks, meeting new people, going for a walk: All are important for helping pets on their journey home, and you can help.