Image
A one-eyed cat, who is missing her right eye, finds the perfect adoptive home with a man with failing eyesight.
By  Denise LeBeau

When Mimi the cat arrived at Salt Lake County Animal Services (SLCoAS) sometime in 2013, shelter staff members noticed she was a bit different. While otherwise healthy, the sweet gray tabby cat was missing her right eye. Best Friends had pulled Mimi from the shelter and brought the reserved girl back to the Best Friends Pet Adoption Center in Salt Lake City where she patiently waited for a home. As the months went by, adopters chose other cats — younger cats and kittens — and still, Mimi waited.

One day when adoption center volunteer Heather Castle was busy cleaning cat enclosures, she noticed there was something extra sweet about Mimi. As Heather cleaned, the cat started nuzzling her. “She didn’t want to go back in the cat tower and wanted to stay and cuddle,” says Heather, who began to wonder: Could this cat be the one?

Heather has always made regular visits to Colorado to spend time with her grandfather, Horst, but lately the trips have become more frequent because Horst’s eyesight is faltering. For some time, Heather and her mother had been scheming about getting Horst to adopt a cat for companionship, and as Mimi nuzzled Heather with her perfect pink nose and white whiskers, Heather couldn’t stop thinking about her grandfather. 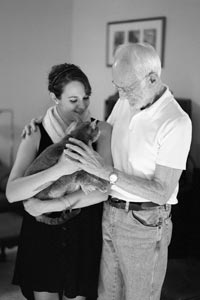 “I automatically knew that Mimi was the one, so I called my mom and asked if I could bring Papa a cat,” says Heather. Next, she called her grandfather and got the go-ahead to bring Mimi out to meet him.

As soon as Heather got the green light, she went directly to the center to adopt Mimi. She didn’t want anyone else to scoop up the precious feline before she did. Then, on the long drive to Colorado, Mimi acted like a seasoned traveler. “She is a perfect cat,” says Heather. She hoped her grandfather would feel the same.

Mimi and Horst hit it off from the moment she arrived. The little gray tabby cat can’t seem to get enough of him. “Mimi won’t let me read at night; she gets right up on my chest, chin to chin and wants to snuggle,” he says.

Seeing the world, together

When she’s not seeking affection, Mimi’s favorite spot in her new home is in front of the big glass doors where she observes the world. Mimi’s also been learning the ropes in the household. Horst is an avid stamp collector and he told her that licking stamps is off-limits. She’ll walk a few steps into the stamp room and then turn and leave.

Mimi has been teaching Horst the ropes too. He had to try three different types of cat food before settling on a suitable delicacy. “She really likes tuna,” he says.

Heather continues to marvel at how quickly Mimi acclimated into her grandfather’s home and at what a great friendship they share. Following a recent visit, Heather recalls: “They were cuddling on the recliner when he told Mimi, ‘you can't see out of your right eye, and I can't see out of my left, but together we can see the world.’"

Some matches are made in heaven, but Mimi and Horst’s was made right here on earth.

To help more animals like Mimi go from homeless to home, become a Best Friends member.

Photos by Heather Castle and Jonathan Hickerson of Hickerson Photography