Image
Read about opening day at the Best Friends Pet Adoption and Spay/Neuter Center in Los Angeles and the special pet adoptions that took place.
By Cathy Scott

Siamese mixes Snow and Simon found themselves in a precarious position, homeless and abandoned, in the City of Angels. But not to worry, their lives have just made a dramatic turn for the better.

Snow and Simon arrived together, two of 160 dogs and cats, at Best Friends Pet Adoption and Spay/Neuter Center, a new no-kill shelter operated by Best Friends in Mission Hills, California, that has a year-one goal to find homes for a minimum of 3,000 animals and spay/neuter 6,000 pets.

Opening day on January 28, 2012, was a grand start toward meeting those goals, with the public pouring into the center to meet and adopt the first arrivals from the city’s six other shelters.

On a recent Saturday, shortly after the center doors opened for the first time, Pam DeBoer happened to be driving down the street from a doctor’s appointment when she noticed signs pointing out the new shelter, so she stopped and went in. That’s when she met Snow and Simon. She called her daughter, Roxanne, to meet her there. 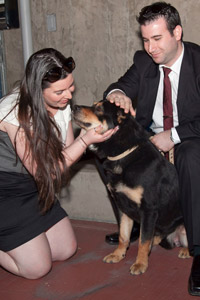 She and her daughter had talked about adopting a new pet for Pam’s mother, Marge, whose cat had passed away the day before from a lengthy illness. "Without her cat, she has no one to talk to," Pam says.

So, Pam adopted Snow and Simon for her mother. "We each go to her house every day," Roxanne says about her grandmother. "We’ll help take care of the cats."

It was good news as well for 40 other cats and dogs adopted during the first weekend, including Rango, a Rottweiler mix. Shelly Roth has loved Rotties ever since she was a child but had never had one — until she and her husband, Ronen, stopped by opening day.

Dogs and humans find each other

The couple was on their way home from a family gathering when Shelly read her messages on her smartphone. "My friend Sonya posted the (shelter) event on Facebook," Shelly says. "I told my husband, ‘We’re not far from this new shelter. Why don’t we go?’ "

They headed for the shelter, where they adopted Rango. "We found our dog soul mate today," she says.

Finding her human soul mate was a golden retriever mix named Misty, whose new person, Leroy Wolf, says, "She reminds me of my other dog — a lot. She died a little over a year ago. My daughter and I have been going to a lot of shelters, and Misty is the one who caught my eye."

Jessica Lott stopped by the center with her husband and son, not intending to adopt a dog. But when they met Sandy, a five-year-old reddish-colored dog, they decided to take her home. "We have a cat named Lady Orange who looks just like her," Jessica says. "We’re renaming her Nareench, which means ‘orange’ in Armenian."

Three-month old puppies Albert and Finn found a home together. Paula Fajardo was looking for a companion for her family dog, Maggie, a Chihuahua, because their other dog had recently died of cancer. "I think Maggie feels lonely. She sleeps all day and misses Maggie. Now she has the puppies to play with," Paula says.

As for Pam DeBoer, she too is grateful for the new shelter and finding Snow and Simon there. "Yesterday was a hard day for my mother and the loss of her cat," Pam says. "Now she has Snow and Simon. She won’t be alone."