Image
Four Ori-Pei puppies, a mix between Shar Pei, known for skin problems, and pug, known for upper respiratory problems, are at the Sanctuary.
By David Dickson

Some things in life are simply meant to go together. Peanut butter and jelly. Halloween and candy. Tennis balls and doggie birthday parties.

Other match-ups, though, don't make any sense whatsoever. For example, combining a breed of dog known for skin allergies with another breed known for upper respiratory problems is not in anyone's best interest, explains Best Friends dog manager Michelle Besmehn.

An unfair shake for Ori-Pei pups 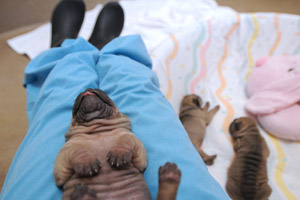 Nobody is going to argue that these puppies aren't impossibly, utterly, irresistibly cute. These little guys melt hearts wherever they go. That said, they could likely develop some unfair health snags down the road. "Combining two breeds with known health issues can be very challenging," explains Michelle.

As can happen far too often, these dogs were bred purely for looks without any concern for health.

However, for these four particular pups, and their mom, Miss Missouri, they ended up at the best possible place to get a new lease on life: Best Friends!

While her puppies are quite social and friendly, Miss Missouri definitely shows signs of having lived the life of a puppy mill dog. Not only is she nervous around new people, but she came with a host of physical problems, including skin issues, ear infections, and double cherry eye. 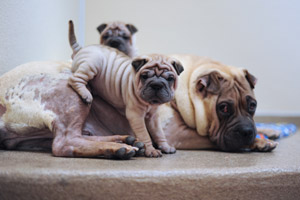 For the skin and ear problems, caregivers and the medical team have been treating her since day one. "She's been awesome at receiving medical attention," explains caregiver Taz Christensen. Bit by bit, Miss Missouri's health has improved, though they're still trying to nail down the exact solution to the skin problems.

Now that her puppies are weaned, Miss Missouri can be spayed. At that point, the Best Friends medical team will take care of the double cherry eye surgically.

In terms of that bashful streak of hers, Miss Missouri has made slow and steady progress toward trusting people, especially her caregivers. "She's still shy, but not as shy as when she first came," says Taz. In time, Miss Missouri will no doubt learn to trust people more and more, just as she's going to continue feeling better physically. Recovering from life in a puppy mill isn't easy, but she's got support and TLC at every turn.

Incidentally, she's also discovered her new favorite thing in the whole world: being outside. "She loves her walks," Taz explains. On the plus side, Miss Missouri is still young at only three or four years old. She has plenty of time to make up for such a rough start in life. 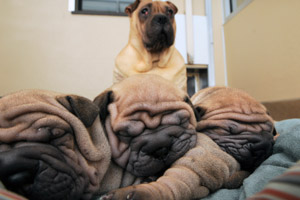 As for the puppies, they are indeed adorable, but sure enough they already have a few problems with breathing and snorting. Plus, one of them has developed some minor sores between her wrinkles because they rub so often. Nothing that's not manageable, but it's still unfortunate. "They're cute," Taz says, "but it's not fair for them."

Everybody remains hopeful that these puppies never experience serious health problems. The caregivers and medical team at Best Friends are certainly working hard to give them every advantage, physically and emotionally, as well as socially. On that note, these happy youngsters are already rockin' and rollin' in their socialization training, and they don't even start the official puppy socialization class for a couple weeks yet. Everybody who meets them falls head over heels in love. 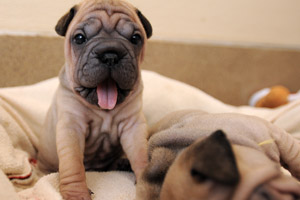 Barnabus, the only boy, enjoys affection from people. He's also the smallest, and strikes his caregivers as something of a plotter. They can tell he's just hoping to pull off some glorious puppy mischief at the first opportunity. "I'm waiting for it," Taz jokes. "I can see it coming!"

Shimmer is the biggest of the bunch and as adventurous as they come. "She's the first to explore new things," Taz explains. Ripple, meanwhile, is still working on increasing her confidence. She definitely warms up to people once she knows them, but strangers are a different matter. The hope is that, eventually, Ripple will learn to enjoy meeting new faces. Lastly, Pebble is sweet as can be. "She's the cuddle bug of the group," Taz says.

Happy endings ahead for Ori-Pei puppies

As it turns out, Barnabus, Shimmer, Ripple and Pebble already have adoption applications. There's no shortage of people who want to try and make things right for these pups who were dealt a tough break right out the gate.

They might have come into this world at a disadvantage, but they'll have every help from here on out.

Every puppy who comes to the Sanctuary needs help with socialization. If you're coming into town, you might consider attending the puppy socialization class. Please contact Dogtown for more details.