Image
Outdoor tabby cat is injured by another animal and has to have his leg amputated. He is recovering and learning to enjoy time indoors with people.
By Christelle L. Del Prete 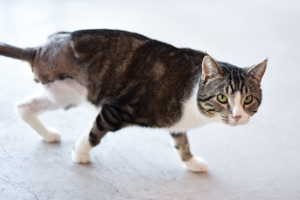 Ludo came to Best Friends hurting and afraid. He’d been attacked by another animal and needed help — fast.

Cat in need of leg amputation

The handsome white and gray tabby cat had lived outside his whole life, but suddenly he was badly injured and it was unlikely that he would ever walk normally again. So even though he wasn't used to people, he would have to put up with them protecting him and helping him to heal and adjust to a life on three legs — indoors.

He was admitted to the Best Friends Animal Clinic, where his damaged and painful leg was amputated and he could recover in comfort and safety.

After a successful surgery to remove his injured leg, Ludo took up residence in Cat World. Caregivers decided to have him live in the lobby, so he could start getting used to being around people. However, at first, he didn’t quite understand why he’d want to do that. After growing up outside, he didn’t know how to be an indoor cat.

Even though it was quite nippy out, instead of staying in the cozy lobby, Ludo spent nearly all of his time in his catio, one of the many secure, outdoor enclosures enjoyed by cats at the Sanctuary. From there, Ludo could enjoy the familiarity of the outdoors while still being completely safe. And, because he was still recovering, his caregivers made sure he was extra snuggly and warm by giving him boxes and totes filled with plush cat beds and blankets. 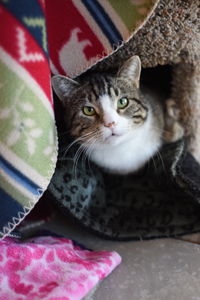 But they also wanted Ludo to experience the joys of the great indoors, as well as start getting some human socialization, which would be crucial in helping him to find a new home. So they started bringing him inside a little at a time.

At first, Ludo would turn around and run right back outside. That was OK, because he did need to exercise and get used to moving around on three legs. His caregivers would bring him into the lobby and let him run back to the catio several times a day. Then, when temperatures plummeted and the desert went into a temporary deep freeze, they had to be more firm by bringing him in for the night.

But something else was happening whenever Ludo came inside. He started staying a bit longer and getting closer to people. One day, he even let someone pet him. Soon, he decided that this petting thing was actually pretty nice, and he began staying indoors a bit longer each day.

Ludo still loves his catio, but now he spends a lot of time curled up in an indoor cat bed. Despite the hustle and bustle of lobby life — with caregivers, visitors and volunteers always coming and going — he is doing great and seems as happy as he can be. He’s learned that those indoor spaces, even with people around, are very good places for a cat to be.

To bring hope and healing to more animals like Ludo, become a Best Friends member.