Taquito's special talent for making friends with just about everyone isn't limited to just one species.
By Sarah Thornton

When it comes to making friends, a quality-over-quantity approach seems to be the most popular. But the way Taquito, an outgoing social butterfly of a dog, looks at it: Why not both? At Best Friends Animal Sanctuary his list of canine friends is longer than any other, and it doesn’t stop there. His play drive is strong and any new face is a potential playmate. Large or small, real or plush, Taquito befriends them all.

From playful pup to sensible socialite

Even the best makers of friends have to start somewhere. When Taquito first arrived at the Sanctuary, he was in full puppy play-all-the-time mode, and it was a little overwhelming for his roommates. “Play, play, play,” recalls caregiver Janna Kruse. “He was honestly burning through roommates and we didn't know what to do. He was too good to be single, but no one could keep up.” 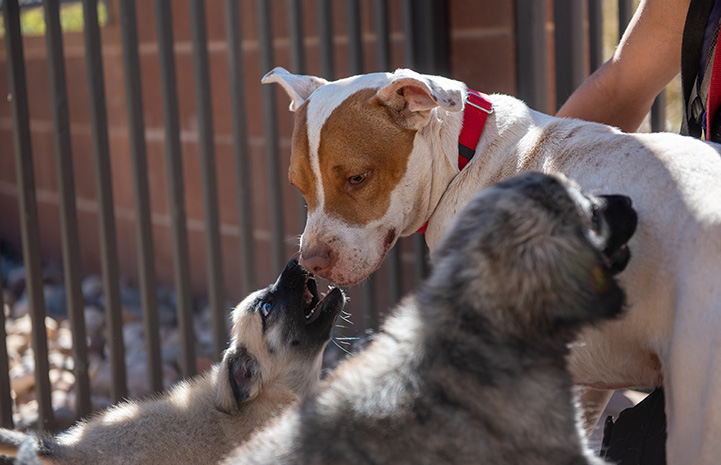 He finally met his match when he spent some time with equally playful puppies and got a taste of his own energy level. He loved them, of course, and had a great time running and rolling around in the sand with them. But after that, the company of calmer adults was exactly what he needed. As he met more dogs and learned their play styles, Taquito learned to match each of them appropriately by playing when it was time to play and resting when his friends wanted a break. 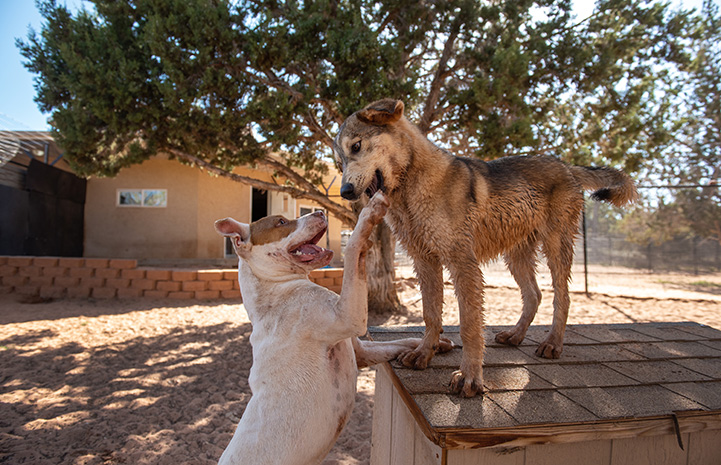 Janna says he became the go-to dog whenever caregivers needed to know how newcomers to the Sanctuary interacted with other dogs, because he could do it all. “He can meet dogs on leash, off leash, multiple at once, any way really. And that’s kind of rare.” 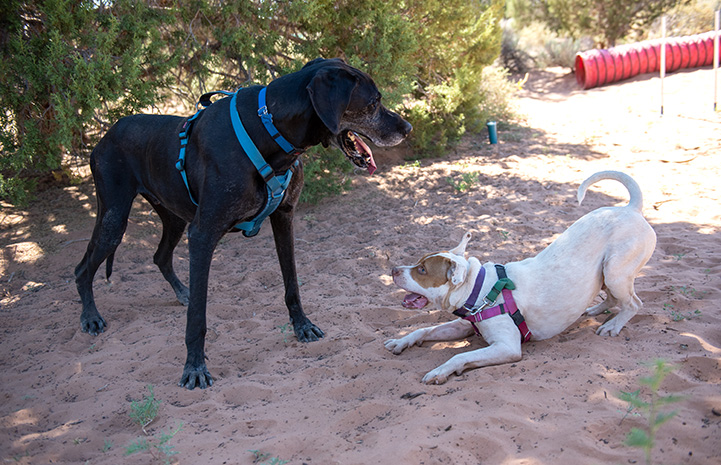 Taquito is the perfect confident companion for shy dogs needing a friend to help them get used to people or needing a little more space and time to warm up to other dogs. He can befriend dogs twice his size and half his energy, or half his size and twice as playful. And his friend-making expertise doesn’t end with just other dogs.

Taquito’s best feline friend is Rango, Janna’s own rescued cat. And he [Rango] loves dogs. So much, in fact, that he sometimes joins Janna at work to meet new dogs and see how they feel about cats ― which is how he and Taquito first met.

They hit it off immediately after a slow, careful introduction. They touched noses, sniffed each other, rolled around on the floor and followed one other around. Taquito wasn’t quite sure how cats liked to play, but he tried his best by offering a play-bow and wagging his tail as excitedly, as he would with another dog. It didn’t take him long before he found his stride with his small new friend. 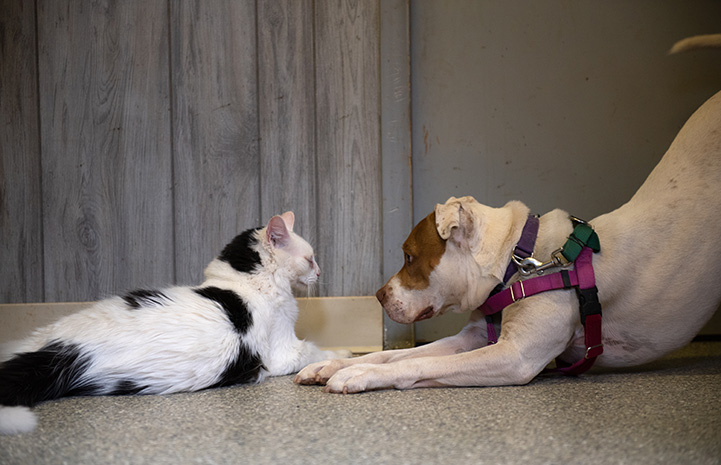 On future play dates whenever Rango had a break in his busy schedule, the two went right back to where they left off, playing like they’d known each other forever. Taquito is always excited to see his fluffy feline friend. 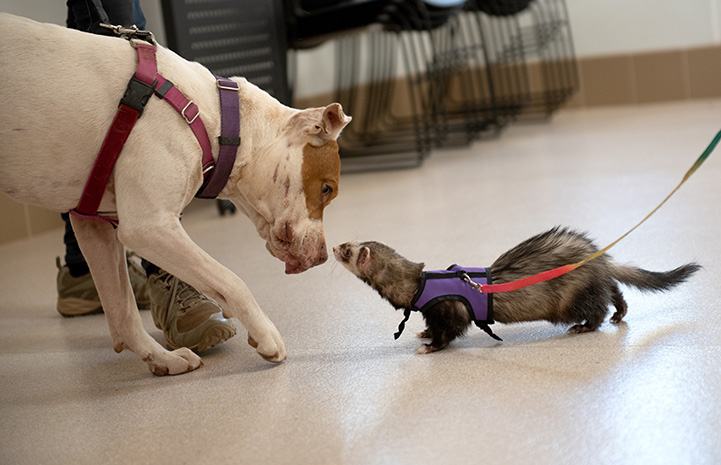 After Taquito’s success with other dogs and Rango, he made even more friends when caregiver Tina Sylvester brought in a pair of ferrets. He was immediately interested. With ears forward and tail wagging, he sniffed at them through the mesh of a carrier before finally meeting each one nose to nose. 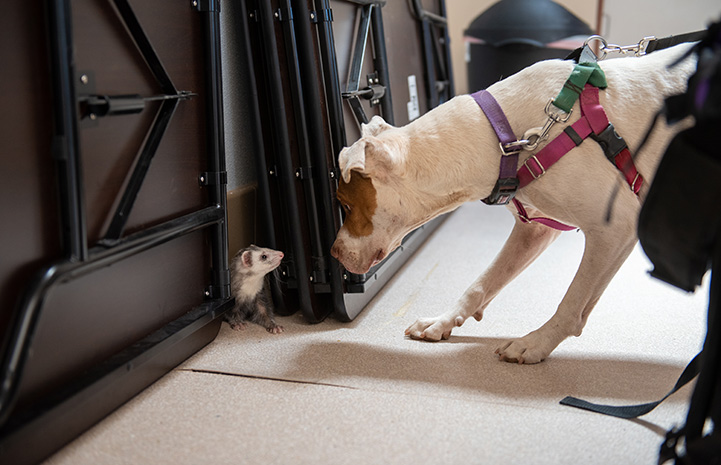 Once Taquito and his two tiny playmates had a good sense of each other, they spent the next hour hopping around and playing hide-and-seek behind stored tables and around chairs. 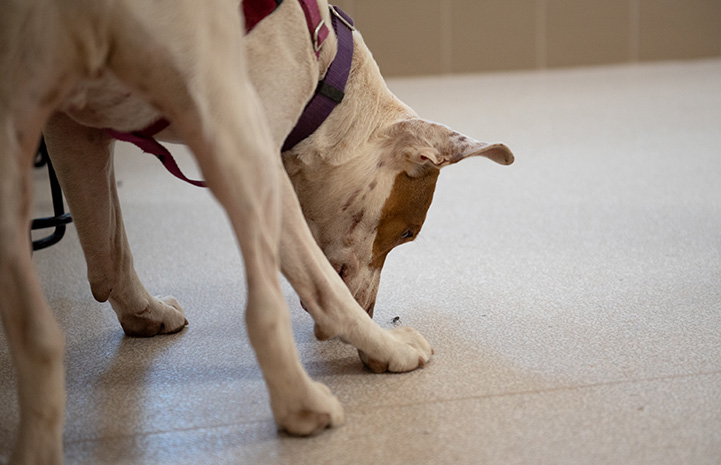 While the ferrets explored, Taquito took a break by offering a play-bow to a fly he found on the floor. He truly wants to make friends with everything. 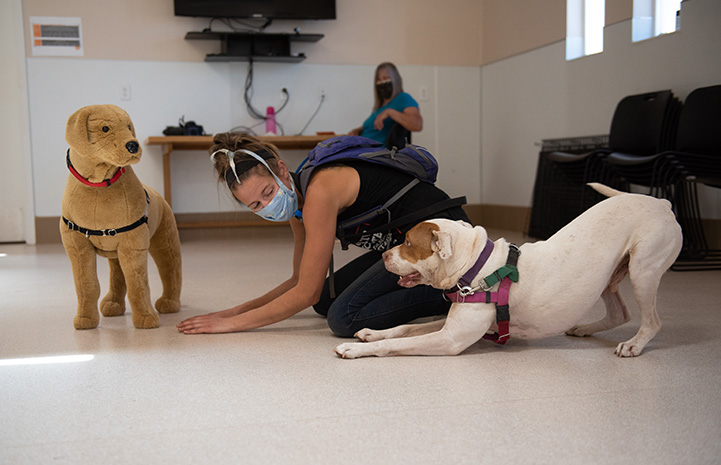 Taquito’s friends don’t even need to be other animals. After “meeting” a couple of life-size plush toys, he greeted them as if they were real dogs just like him. He tried to get them to play by bowing, running around, sniffing them and pawing carefully at their faces. 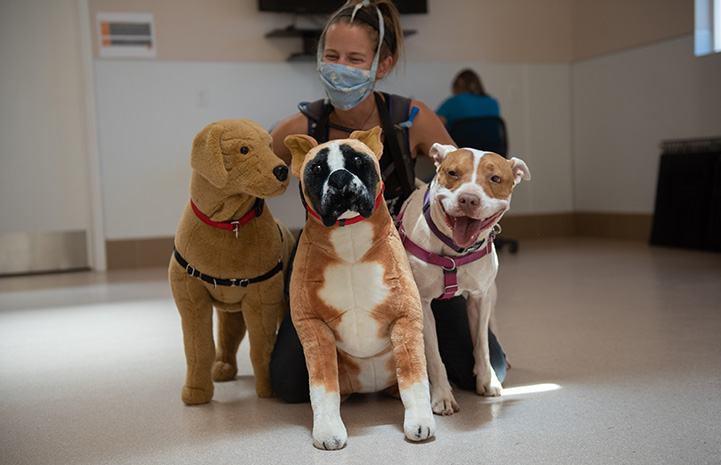 He may have been a little confused by their lack of smell and movement, but he was still going to make friends if he could.

Taquito’s outgoing personality has certainly earned him a lot of playmates; and, in turn, he’s helped many of them gain confidence and feel comfortable making friends. Right now, while he’s helping shy dogs so they can go home, his human friends are helping him with his anxiety around medical interactions, so he can go home one day soon.

Taquito is having fun while at the same time doing something important. “His ability to live with other dogs of all shapes, sizes and personalities helps us save more lives and also improves his,” says Janna. And so, Taquito’s friend list keeps growing, and all are welcome. 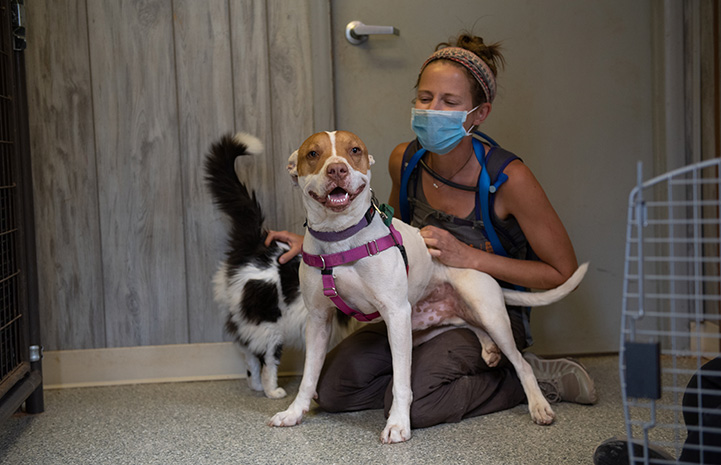 Help Taquito and his friends

By joining Best Friends, you can help pets like Taquito and his many, many friends as they look for new homes.