Image
Lynx point and Siamese mix cat was hit by a car. A six-hour surgery prevents him from having to have his leg amputated.
By Christelle L. Del Prete

Ever watch a cat with three legs leap up onto a scratching post or land perfectly in someone’s lap? Most cats can move around like nobody’s business, even after losing a leg. But Leopold isn’t like most cats. So saving his badly injured leg was a No. 1 priority.

The five-year-old lynx point and Siamese mix is a big, heavy guy. Food is one of his favorite things in the world, and he’s a bit on the pudgy side. But he also has a natural plus-sized frame. That translates into extra weight, which can make things pretty difficult for a cat walking on three legs.

Help for a disabled cat

Leopold’s history and the cause of his injury are a bit of a mystery. Most likely, he’d been living as a stray when he tangled with a moving car. He came to the Sanctuary through Best Friends’ Four Directions Community Cat Program because he had a fresh wound on his back leg that needed immediate attention. But the thing that had him hobbling around like a seriously disabled cat was an old fracture in the ankle of that same hind leg. And no one knew how long he’d been living like that.

Because Leopold was struggling to get around as a three-legged animal, Best Friends vets wanted to give him the best shot at keeping all four of his legs and being able to use the injured one again. So they called in a specialist who had done other extra-tricky surgeries to help Sanctuary animals in need. Soon, Leopold was headed to surgery. 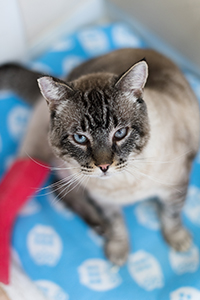 As it turned out, his procedure wasn’t quick or easy. Because the injury was old, and scar tissue had built up around it, the surgery took six hours. Once it was completed, veterinary staff would just have to wait and see if the long, complicated surgery would work as they’d hoped.

Of course, Leopold needed some recovery time before Best Friends vets could say for sure that the surgery was a success. He settled into the vets’ office at the Best Friends Animal Clinic, where he not only got lots of rest, but also plenty of attention. He became known for his reaction to belly rubs, which was to sprawl out on his back, fall asleep and start snoring.

It’s not surprising that Leopold got a little too comfortable in the lap of luxury. By the time he was well enough to start exercising, he didn’t see any need to do so. He also didn’t mind meowing loudly to let everyone know how much he disliked physical activity. The only exception was at feeding time, when he would suddenly become pretty interested in following the veterinary staff around.

Because Leopold needed to be much more active to regain his strength and muscle tone, he moved to Cat World and started a daily exercise program. Once he got off his heated bed and back on his feet again, his recovery switched gears and went ahead at full speed. Now, Leopold’s getting around like nobody’s business. And he’s doing it on all four feet.

Help more cats like Leopold get back on their feet. Here’s how: