Image
Horse who was fearful of almost everything receives Parelli Natural Horsemanship training and is adopted into the perfect home.
By David Dickson

It's not uncommon for animals to be startled by loud noises. Vacuum cleaners, for instance, have long been the mortal foe of many a dog. Most of the time, though, animals give a pass if the noise is far away. And then there's Incitato the horse.

When Incitato came to the Sanctuary several years ago, he was a “hot mess," explains Best Friends horse manager Jen Reid. A stunning, beautiful, athletic hot mess, sure, but a hot mess nonetheless.

Not only was Inci (as he came to be called) afraid of most everything around him, he could spook at something far off in the distance.

Here's one example. Inci had serious issues with vehicles, especially large ones like farm equipment. If a tractor started up several hundred yards away, Inci would react as if someone were tossing hand grenades in his dinner dish. "None of the other horses even noticed the tractor," explains Best Friends equine trainer Linda Alvey. "He's hyper-aware."

Inci even kept a wary eye on bicyclists. "He was always scanning the horizon," Linda says.

Before coming to Best Friends, Incitato had been used as a breeding horse with little or no positive interaction with people. "He was totally unsocialized and terrified of everything," explains Linda. 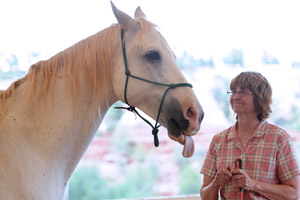 With Inci, caregivers could tell that he wasn't going to overcome his many fears quickly. Sure enough, they spent years helping Incitato learn to trust people and find confidence. One of the primary tools they used was consistently playing an exercise known as the Friendly Game, one of the games in the Parelli Natural Horsemanship training program. Parelli is the horse-training methodology of choice at Best Friends.

Here's one brief example of the Friendly Game. If you have a horse who’s afraid of people, you walk toward the horse until he or she starts showing signs of being uncomfortable. The instant they start to show their concern, such as by looking away or raising their head, you stop and wait. And wait ... until you see some sign that they're relaxing. Perhaps they look at you, or drop their head and lick their lips.

At that point, you back off and relieve the pressure. Repeat one zillion times. Over time, you can gradually get closer. The idea is to convince them that you're on their side, that you recognize and respect that they are nervous, and that nothing scary is going to happen.

It's an incredibly effective technique for building confidence in a horse as well as developing a bond. Over the years, baby step by baby step, he got there. Inci transformed into a talented and emotionally solid horse who now impresses everybody he meets.

As for Incitato himself, sorry to all you horse lovers, but somebody recently noticed what a superstar he is. Jacquelyn Hobbs of Vernal, Utah, had a serious case of love at first sight when she met Inci. "After seeing him the very first time," Jacquelyn says, "I could tell that he was what I was looking for." She decided to adopt.

The staffers at the Sanctuary are thrilled. "We could not have envisioned a better home," says Jen.

Jacquelyn uses Parelli techniques with her horses and has continued working with Incitato. He keeps doing better than ever. Not long ago, she was out on a trail ride with Inci when a huge cattle truck came lumbering by. Remember, this is a horse who used to view large vehicles the same way most people regard a coiled rattlesnake. Well, Incitato practically yawned. "He stood there just fine," says Jacquelyn.

He's had similar victories in the short time he's been in his new home. At first, he was reluctant to venture much into his new pasture. Now he explores every inch. Early on, he was nervous around dogs. Now he barely notices them. "I love his personality," Jacquelyn says. "I can't believe somebody didn't adopt him sooner."

Again, to all you horse lovers, there are other amazing horses like Incitato waiting right at Best Friends. They simply need a second chance.

Please consider Best Friends when it's time to adopt your next horse. Here are some of the incredible horses at the Sanctuary ready for homes.