The perfect pet for you

Image
Your perfect pet may not be the dog or cat you envisioned, or even the species you thought you wanted, but the animal will be perfect nonetheless.
By Mary-Jo Dionne

In 1969, the Rolling Stones released what would go on to be named the 100th greatest song of all time by Rolling Stone magazine on its list of the 500 greatest songs of all time. The title? “You Can’t Always Get What You Want,” of course. And while I apologize that the refrain will no doubt be swirling around in your head for days after you read this, I mention it because the song’s message applies as much to human-to-pet love as it does to human-to-human love.

There are many reasons why we might go into the pet adoption process with an already-painted picture — whether it’s wanting a new pet who resembles a beloved pet who is deceased, or seeking an animal of a specific age, look or build that we feel will be the perfect complement to our lifestyle, or even steadfastly holding on to the belief that we are committed to one species over another (read “cat people” versus “dog people”). Regardless of our reasons, though, what we are really doing is shutting the door on endless possibility — countless sweet pets deserving of a fresh start who might be staring us right in the face. 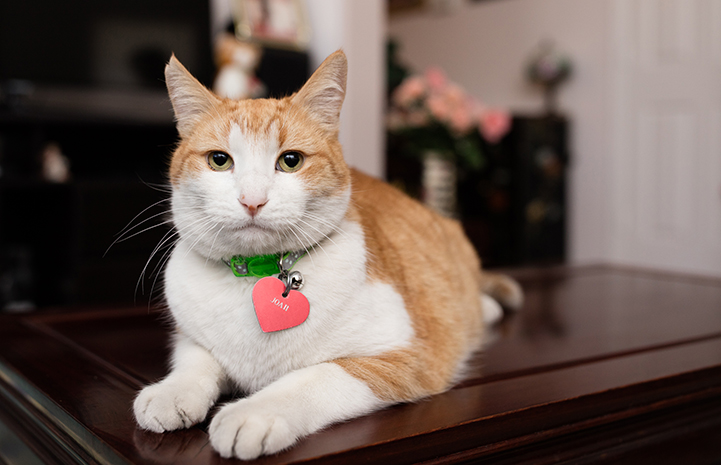 I say this entirely without judgment. Trust me, my family’s newly added dog, Sarah, and cat, Oscar, are the polar opposites of what we believed we wanted. But, it turns out, they are exactly what we needed.

Sometimes those pets in need appear online, as in the case of Sarah, who my husband and I stumbled upon accidentally while unsuccessfully seeking the doppelganger to our dearly departed Cowboy; or, sometimes, they appear on lawns, as in the case of a brazen cat outside of Las Vegas.

In the spring of 2015, when Michael and Julie Brooks of Henderson, Nevada, lost Max, the oldest member of their trio of senior dogs — a group they called the Three Musketeers — they were heartsick. When Max died, they felt he couldn’t and shouldn’t be replaced, and so, despite being self-described “dog people,” they decided a new dog simply wasn’t in the cards. What they wanted was to leave the pack as it was, with its two remaining musketeers. However, Julie says, “There was a hole in the fabric of our daily lives.” And despite what they may have believed was best for their family at the time, there was a special someone out there who was keen to fill it.

One hot August night, as the couple sat outside, a skinny orange cat sauntered up, seemingly out of nowhere, and plunked himself on the lawn as if declaring, “Well, here I am.” Regardless of the cat’s confident arrival, the two humans had no intention of adding a cat to their brood. At the time, after all, they were dog people. “But we couldn’t let him wander the streets,” Michael says. “He was scrawny, didn’t have a collar and badly needed water. So we took him in — temporarily — on the condition that he get along with our dogs.”

Temporarily? Sure. If you say so.

It’s funny how this concept seems to be a theme for many of us who think we know what it is we do and don’t want. For my part, I agreed — temporarily — to peruse Sarah’s online profile, despite the fact that she didn’t look a thing like what I thought I wanted. Then I blinked, got sucked into her awesomeness, and “temporarily” swiftly became “permanently.”

Best Friends’ own Vicki Kilmer, director of business intelligence and strategy, can relate. When her faithful chow mix, Kiri (the confidante who had been by her side during some of life’s more trying times), passed away, Vicki kept a pet-free household for nearly two years as her heart slowly mended. But when she felt ready to open her home again, she knew what she wanted. She wanted another Kiri, a dog whose physical traits embodied Vicki’s “type.” For a long time, she had identified as a lover of big fluffy dogs — and hey, the older the better. 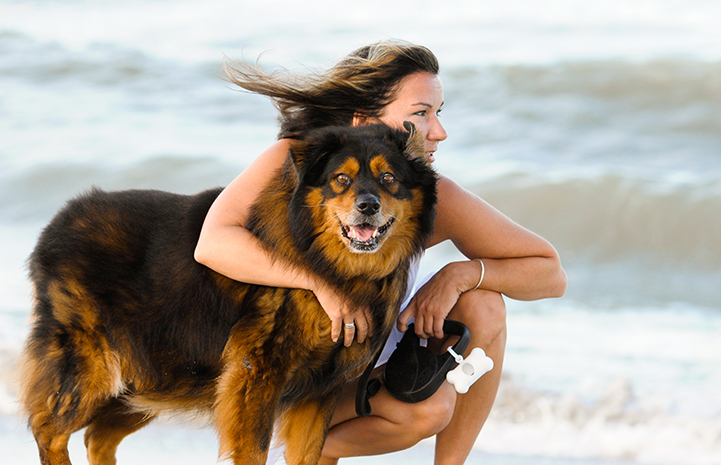 So, off she went in search of a big fluffy senior. She reached out to the local shelter, Jacksonville Humane Society, a Best Friends Network partner, and asked staff to keep an eye out for her (keywords: big, fluffy, senior). Today, she laughs as she says, “Naturally, they called to see if I’d be willing to foster a small hairless puppy.” Oh well, Vicki thought, what did she have to lose? Fostering is temporary, right?

Well, not always. As soon as Vicki learned more about the poor little girl — a nearly lifeless waif who had been rescued from the side of the road and cared for until she was strong enough to stand — she was, in her words, “all in.”

“I picked her up on Halloween in 2017,” she remembers. About the formerly emaciated dog, Vicki says: “There she was, all dressed up by the staff,” wearing, of all things, a skeleton dress. “I took her out to dinner with me that first night. As we sat outside the restaurant, I was cautious about people approaching, given that this was all so new to her and her to me. While a bit timid, she greeted everyone with tail wags and kisses. I instantly fell hard.”

Six days later, Vicki adopted her. “She wasn’t what I was looking for, but she was exactly what I needed,” Vicki says, harkening back to those early days. She helped nurse the little dog back to physical well-being, while the dog in turn nursed Vicki back to emotional well-being.

“I had moved into a new house,” Vicki says of that transitional time in her life. “But it wasn’t really a home until she arrived.” So, it makes sense that one of the first things Vicki did after so unexpectedly finding her new true love was to, very appropriately, change her name to Mia — the Spanish word for “mine.” 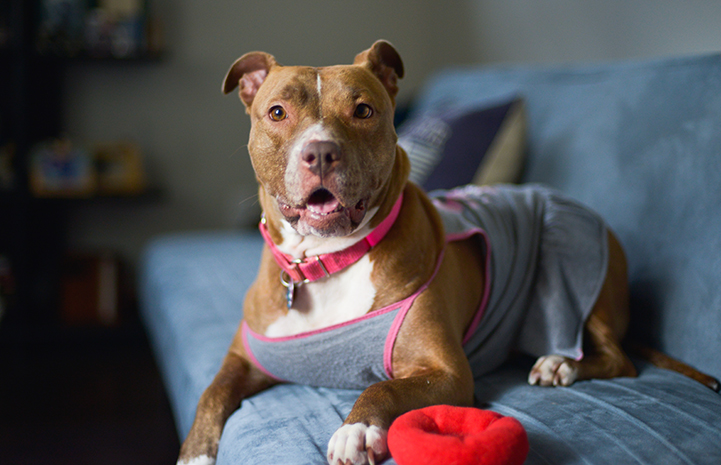 The transition to “mine” or more specifically “theirs” is exactly what happened to that special, somewhat presumptuous cat who appeared at the Brooks’ home. Michael and Julie named him Joah, the Americanized spelling of the Korean word for “good thing.”

“Julie had seen Joah hanging around the neighborhood a few days before he boldly strolled into our lives,” Michael says. “In fact, he’d watched her walking our dogs, Toto and Coco. And Coco had chased him off. So, he was sizing us up before he made his move.” 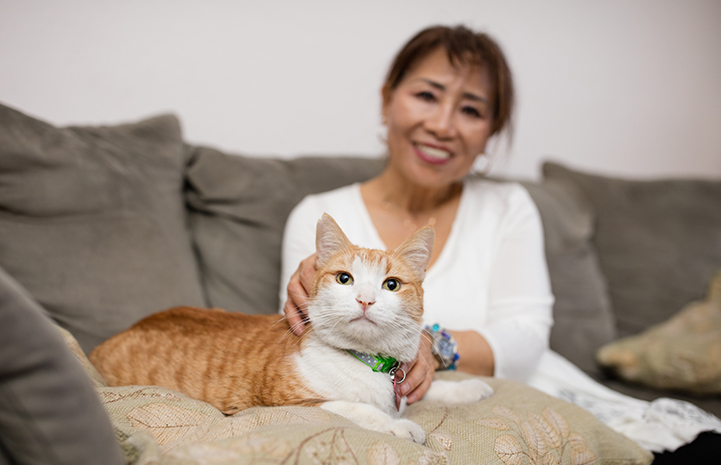 It’s a move that has paid off in spades. Joah spent the first week and a half sequestered in the family’s downstairs den, but the duration of his tentative forays into the living room gradually became longer as everyone got used to one another. Michael says, “When we moved his food bowl into the kitchen, it took only one quick hiss to put our peskiest dog, Toto, in his place for good.” With that, the new family dynamic was established, and “temporarily” became “forever” — with nary a snarl between the dogs and their new much-adored, albeit unexpected pack member.

“Now, here we are, years later, with a new group of three musketeers who look out for each other while Julie and I find ourselves the kind of ‘cat people’ we used to wonder about,” Michael admits. “We take photos and videos of Joah’s antics, and we’ve watched hours of hilarious cat videos on YouTube.” Suffice it to say, while the memories of Max remain cherished in the Brooks’ household, the hole has indeed been filled by a confident cat who picked his new family — a family that fell head over heels.

“Cats are very different from dogs. But very cool in their own way,” Michael says. “Joah has taught us both about how one’s misconceptions can deprive you of a great experience. Now that we have Joah, we get it.”

And while on paper, as they say, Mia is exactly the dog Vicki would never have believed she wanted, today she shakes her head in disbelief over the good fortune fate has handed her. She can’t imagine that she ever allowed herself to get caught up in superficial qualities — things like “fluffy” — knowing now that it’s about a much deeper connection. “Mia’s case was so extreme that I just wanted to help her strengthen, and I knew I could shower her with love,” Vicki says. “What happened, though, was that she strengthened me and showered me with love.”

A revelation like that feels like a beautiful place to segue into some very pertinent lyrics: No, you can’t always get what you want. But if you try sometimes, you just might find, you get what you need.

Adopt a cat or dog who needs you 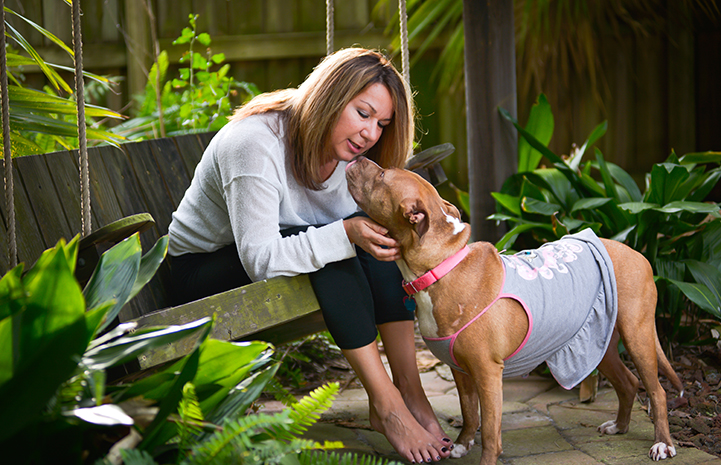 There’s certainly nothing wrong with having an image of your ideal companion in mind when you set out on that search for love. And there’s certainly nothing wrong with identifying yourself, as Michael and Julie Brooks once did, as a “dog person” or a “cat person” (or a “bunny person” or a “bird person”). However, sometimes when our hearts are set on one particular outcome, we close ourselves off to other lovely scenarios — lifesaving ones, in fact.

As Vicki says, two simple words apply when it comes to the animal you think you want and the one you might actually need: “Be open.” That’s because what or (more specifically) who we need can come to us in so many ways when we least expect it. Like, today, for example: Feel like taking a drive to your local shelter or popping online to see who may be waiting to surprise you? Go for it. You never know whose life you could change. And you never know who just might change yours.