Image
Magma has a crisscrossed beak from an infection when she was young, but her unique looks and friendly nature help her stand out from the flock
By Sarah Thornton

If you’ve spent any time in a big city, you know that pigeons come with the territory. But there’s more to these oh-so-common birds than meets the eye. For example, have you ever seen a pigeon play? Did you know that pigeons purr? Magma, a pigeon at Best Friends Animal Sanctuary, is special and she knows it.

Infection leads to a unique beak

As a young bird, Magma was found on the ground in Las Vegas with a terribly infected beak, a condition she apparently had for a long time. By the time she arrived at Best Friends, she had lost her left mandible, resulting in her beak becoming crisscrossed.

Her unique crossed beak makes it difficult for her to preen herself and requires that she be on a special, easy-to-eat pellet diet. Because of it, she probably wouldn’t survive if released. Most animals being treated at Wild Friends are truly wild and they are eventually released following rehab; however, pigeons are one of the world’s first domesticated species and it’s common to keep them as pets. The domestic life suits Magma. She is gregarious and revels in all the attention from staff and visitors. 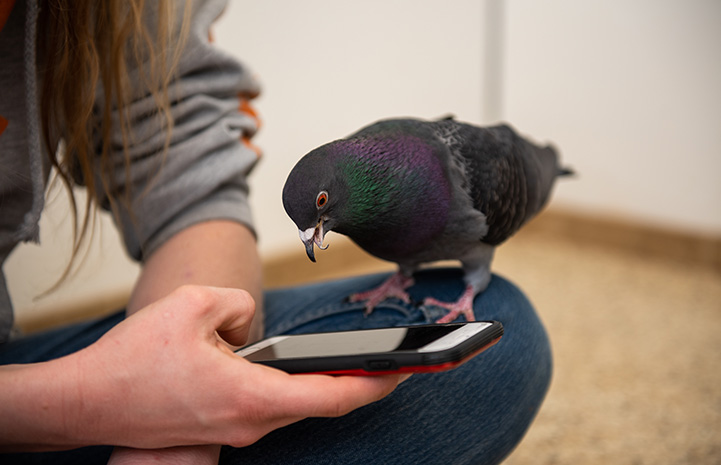 Pigeons are incredibly smart, one of the few animals believed to recognize themselves in mirrors. And Magma is no exception. She’s curious about the world around her and is always ready to learn a new game.

She has a lot of fun playing games made for cats, such as pecking at colorful fish as they swim across a phone screen. Magma also has a passion for percussion, fluffing up her feathers and purring a quiet, gentle cooing sound when you drum out a beat for her. She’ll watch your hands with her bright orange eyes, excited for the rhythm. She’s even shown some curiosity about other Wild Friends residents, such as marching right up to inspect one of the bearded dragons and all its strange pokey parts.

Pigeons are also great at telling people apart (even in photos) and Magma loves seeing new faces. She adores her caregivers, but she’s extra excited about meeting visitors. After freshening up with a bath in shallow water, she happily greets volunteers and tours, and she’s always ready to make new friends and earn new admirers. She enjoys younger guests, too, doting on them and hopefully leaving a lasting impression of pure pigeon politeness. 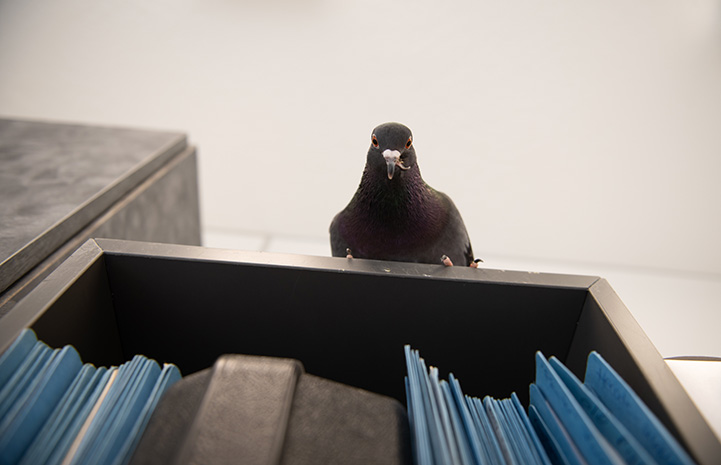 While preening may prove a bit of a challenge for Magma, she has no problem at all grooming people. She hops right up to make sure there’s not a hair — or even a shoelace — out of place. She will make sure your freckles are still there and, if you have any colorful tattoos, she’ll also check those out for you. She just wants to make sure you’re as well taken care of as she is.

With her one-of-a-kind charm, it’s likely that this special bird’s next stop will be a new home, where she can dote on her people (and vice versa) to her heart’s content. 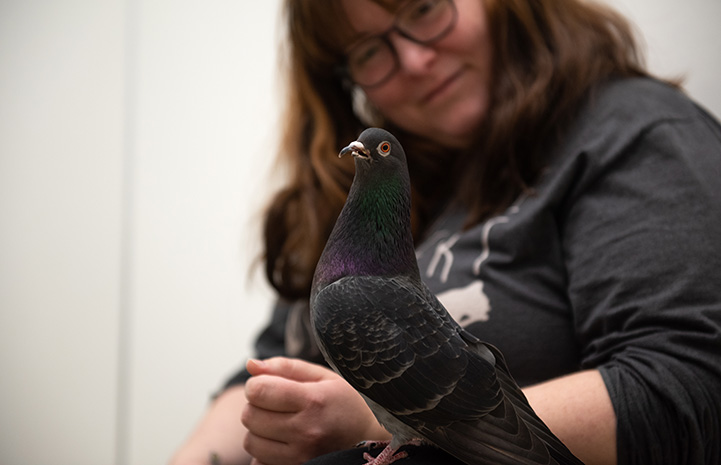