Image
Best Friends-New York features adoptable cats every day at the PetSmart in Harlem. Read one abandoned kitten's story of how he found a home.
By Denise LeBeau 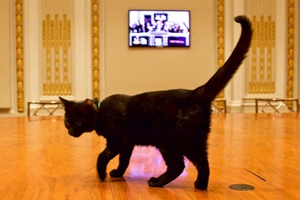 Patrick, a jet black kitten with sparkling green eyes, was abandoned in the Big Apple last summer. He was only a few weeks old when he arrived at Animal Care & Control of New York City ― too young to thrive in a busy shelter. When Best Friends–New York learned of the kitten’s plight, he was transferred into the foster program. Luckily, as Patrick was growing up into the perfect companion, Best Friends–New York was putting some Harlem hustle into their adoption efforts. When Best Friends teamed up with an uptown PetSmart, Patrick’s days of singing the homesick blues would soon be history.

Since the beginning of January, Best Friends–New York has featured approximately a dozen adoptable cats every day at the PetSmart in Harlem. The adoption outlet has Best Friends volunteers on hand caring for the cats, socializing them and matching them with adopters.

Patrick was already a celebrity of sorts when he arrived at PetSmart. In December, he accompanied Best Friends to the opening bell-ringing ceremony for the New York Stock Exchange. While he didn’t find his new home on Wall Street, uptown would prove much more fruitful for the black cat.

Jennifer Katz-Brizzolara and her husband, Chris, had been thinking about adopting a pet for a few years. “The time never seemed right to make the commitment,” says Jennifer. “But then a few months ago we decided to stop waiting because we knew there were lots of animals in need of homes now.”

Both Jennifer and Chris are longtime Best Friends supporters, so when they were ready to adopt they contacted Best Friends–New York to find out where and when they could meet a potential new pet. Since Harlem was just a subway ride away from their home in Queens, they soon were on their way.

Within minutes of meeting Patrick, the couple was smitten with how playful and affectionate he is. They, like just about every animal lover faced with homeless pets, had to hold themselves back from adopting every cat available. “We wish we could have taken all of them, but as first-time cat parents we didn't want to be outnumbered,” says Jennifer.

The fast and the furriest 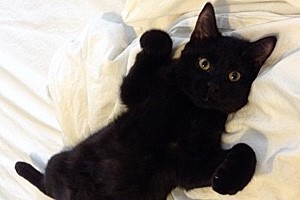 Patrick, now named Dominic, is settling in beautifully. “There’s a new energy in our home,” says Jennifer. She marvels at how Dominic swings from one extreme to another. On one hand, he’s super energetic and wants to explore and play with his toys (especially his stuffed starfish), but then he gears down to snuggly, lazy fluff-ball mode. “After a long day at work, it has become our routine to sit down on the couch and let Dominic climb up onto our laps, shoulders, chest, head, face, or wherever he feels like making himself comfortable,” says Jennifer. She and Chris have had to adapt, because now they often can’t hear one another over the endless purring in their ears.

Dominic is named after a character in “The Fast and the Furious,” one of their favorite movies. “Dominic absolutely lives up to the name because he is the fastest and the furriest kitty we have ever known, and he loves to hang out in his cardboard box garage,” says Jennifer. “As the real Dom would say, ‘Family is everything’ and little Dominic has completed ours.”

With a warm home, toys and more love than he could ever wish for, Dominic’s new life is a true New York success story.

Find an adoptable cat or dog near you.